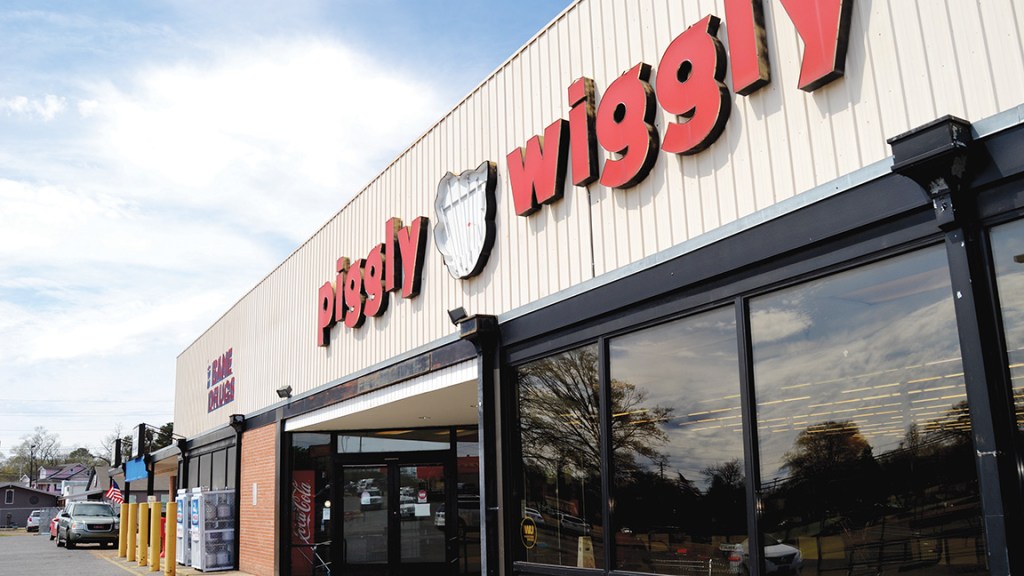 Photo by Donna Campbell The Piggly Wiggly grocery store on West Monticello Street has nearly bare shelves, while the store on Hwy. 51 N is closed. Retail Coach is actively attempting to recruit new grocery retailers to the area.

The mayor of Brookhaven is loading the city’s eggs in The Retail Coach’s basket and hoping they’ll be successful attracting a grocery store to replace Piggly Wiggly if and when the markets close completely.

“The city is actively recruiting grocers through The Retail Coach,” Mayor Joe Cox said Tuesday night during the Brookhaven Board of Aldermen meeting. “There have been at least seven grocery store chains who have been looking at our city and the Brookhaven market. Of course they’re all keeping an eye on the Piggly Wiggly situation to see what is going to happen there because of the advantage there in lieu of a brick-and-mortar project and anything that would be involved there.”

Danny Manning, who owns several Piggly Wiggly stores in Fairhope, Daphne and Mobile, Alabama, planned to purchase six of the seven Piggly Wiggly stores owned by Glenda Rushing, but pulled out of the deal March 8. Rushing owns the property and building at 215 Hwy. 51 N. A New York company, Brookhaven Retail LLC, owns the building and property at 364 W. Monticello St., though Rushing owns and operates the Piggly Wiggly there. The Hwy. 51 Pig is closed and while the Monticello Street Pig is open, the deli is closed and shelves are mostly bare.

The Retail Coach is a Tupelo-based consulting and market research firm that works with local governments to identify gaps in retail communities and fill them by recruiting like businesses to open new stores in the area. The group’s first year is devoted to researching the local economy, with active recruiting taking place in the second year. Brookhaven and Lincoln County in March 2018 split the $20,000 bill for the retail recruitment group’s second year.

He also brought to the board’s attention a hit-and-run involving an employee in the street department. He said the man had exited his truck when another driver’s side door mirror struck the employee, breaking his hand.

The incident is under investigation.

In other business Tuesday, aldermen:

• Approved the hiring of Alanna Smith in the Brookhaven Police Department as a part-time dispatcher at $10 an hour.

• Approved the resignation from Steve Huey from the Lincoln Brook Airport effective March 19.

• Approved pay request No. 12 from Greenbriar Digging Services in the amount of $180,000 for work completed and stored materials for the 2015 SRF Water and Sewer Improvement Project.

•  Accepted the law maintenance bid from Griffin Lawn Service LLC at $1,970 per cutting, which includes the entrance to East Manufacturers Boulevard, South First Street NE at Greenview Trail NE at the Brookhaven Welcome Sign and southeast corner of Hwy. 51 South and Natchez Avenue intersection. The contract runs April 1 through mid-March next year.

• Approved for Grant Britt to attend the driver/operator class at the state Fire Academy on April 1-14. Cost of the class is $675. Reimbursement approved for meals and mileage.

• Approved for Keith Lewis and Kris Xifos to attend the 2018 annual management and technical conference and exhibition in Jackson March 25-28. Cost of the class is $100 each. Reimbursement for mileage only.

• Approved payment to Rainbow Landscape Contracting in the amount of $3,895 for work completed in the cemeteries as part of the America in Bloom Grant; and revise the budget. This is part of the city’s required 50/50 match.

• Approve pay request No. 5 from Oddee Smith Construction Inc. in the amount of $12,260 for work completed on the Williams Street Bridge repair and revise the budget.

• Following a brief closed-door executive session, approved the termination with cause of William Wade Jr. from the street department effective March 19.