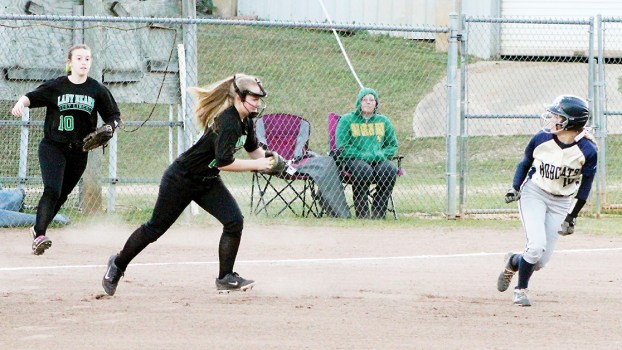 Photo by Cliff Furr Kayci Beth Wallace of Bogue Chitto runs to avoid the tag of Deanna Lofton on Tuesday. Wallace would escape the rundown and go on to score on a play at the plate that was ruled obstruction. Thursday night the Lady Bears host Loyd Star while the Lady Bobcats play at Enterprise. 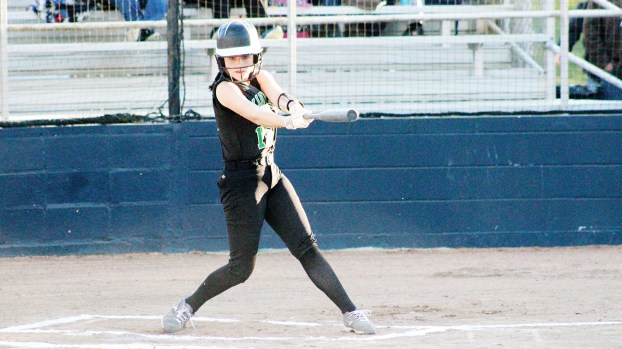 The Bogue Chitto Lady Bobcats (8-1-1) hit the ball hard and with confidence Tuesday night as they opened Region 7-2A play with a 10-0 win over the previously-unbeaten West Lincoln Lady Bears (6-1).

The game featured two of the best underclassmen pitchers in Southwest Mississippi squaring off in the circle. Freshman Averi Paden drew the start for West Lincoln and struck out one in three innings while giving up four runs on six hits.

BC countered with their ace, junior Codi Leggett. Leggett has been pitching for the Lady Cat varsity team since her seventh-grade season in 2015.  In 2017 she was the winning pitcher in a 6-2 win over Hamilton that clinched the 1A state title for BC.

As a junior she’s been nearly lights out this season as the lone loss for the Lady Bobcats was a 10-1 defeat by Lawrence County in their season opener.

“Having Codi in the circle gives our girls confidence,” said Lady Cat coach Kris Smith. “The girls know if they can score some runs she’ll protect that lead. She’s been doing this for a long time now.”

West Lincoln had a strong start offensively as Morgan Newman led the game off with a single and then moved to third after a steal and a sacrifice, however Leggett struck out Averi Paden to end the inning.

The Lady Bears again had some success in the second as Maddox Redd reached base on a two-out error. Redd gained first base when Alece Nettles of Bogue Chitto couldn’t see the ball thrown to her. The Western sun was shining right into the face of Nettles and she was forced to protect herself from the throw as it went past her into the fence.

Redd then found herself at third after another BC error and a wild pitch, but with the bases loaded Leggett was able to strike out Newman to end the inning.

WL coach Andrew Redd has a speedy team that wants to run the bases well and put pressure on their opponents by consistently moving runners into scoring position. Tuesday the Lady Bears missed some of those opportunities early.

In the second inning Bogue Chitto sophomore Julianna Frazier broke the scoreless tie with a solo home run to center field to lead off the inning for her team. It was the second home run of the season for Frazier.

Adi Paden started the WL half of the third off with a single and then moved to second on a walk by Camryn Summerall. A sacrifice by Averi Paden moved Adi and Summerall up to second and third with only one out in the inning.

Mary Claire Johnson then flied out to Bogue Chitto right-fielder Kayci Beth Wallace. Wallace made an on-the-money throw home that caught Adi Paden trying to tag up and ended the inning.

The first batter of the inning for her team, Wallace then reached on a single. Karly Leake would then get on via a bunt that moved Wallace to second. Wallace got caught in a rundown but moved to third on a throwing error. Wallace then broke for home after another miscue by the Lady Bears and was called safe at the plate on an obstruction call.

During the rundown Leake moved to third where she then scored from on a Leggett double that made the Lady Cat lead 3-0.  A Julie Anna Batram single later in the inning would push across another BC run.

Leggett was lights out in the circle after the third as she only gave up one more hit in the game, a single to Newman that led off the fifth.

At the plate Leggett then began the fifth off with a single and was replaced by courtesy runner Kaitlin Poole. Poole would advance to second on a Baileigh Jackson bunt single. Frazier then nearly got her second dinger of the game, but the ball stayed in the park after hitting the top of the fence as the standup double scored Poole. Frazier and Jackson then scored on a Batram single that made the BC lead 7-0.

A Wallace single later in the inning scored Batram and Nettles. Bartram would end the game in the bottom of the sixth with a double that scored Poole and invoked the ten-run rule.

“We can’t give up big innings like we did tonight,” said Redd. “Once we gave up a couple tonight our heads got down. We’ll go back to the drawing board and improve for next time.”

“Our girls have worked hard in the weight room this offseason and they’re hitting the ball with a lot of confidence,” said Smith. “They’re a hardworking group.”

Bogue travels to Enterprise (1-6) tonight for a 6 p.m. first pitch.