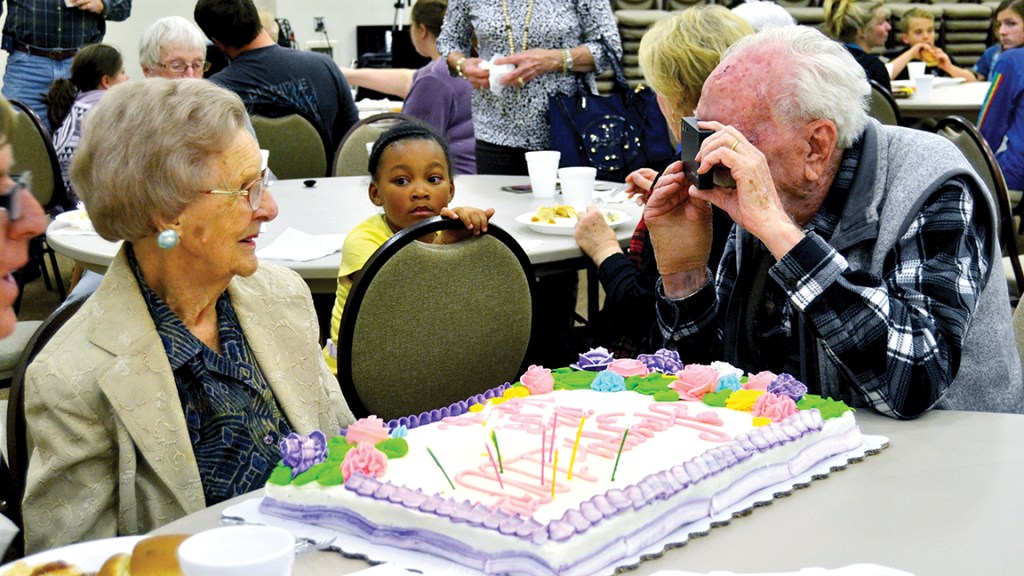 Photo by Donna Campbell Bob Holland snaps a picture of the “birthday girl” Velma Taylor at a party in her honor at First United Methodist Church Brookhaven Wednesday while Casey Herring watches the cake. Wednesday was Herring’s 6th birthday.

The oldest living member of First United Methodist Church Brookhaven hit triple digits today, and she might even celebrate if the Spirit moves her.

Velma “Bunny” Taylor was born when Woodrow Wilson was president. Her life has spanned the administrations of 18 presidents from Wilson to Donald Trump. She saw the Great Depression, World War II and man’s first steps on the moon.

Born Velma Love in Eupora, the young woman worked at Taylor Brothers Hardware and met the love of her life, Bill Taylor, the son of one of the Taylors.

“He was the cutest one,” she said.

They married in 1939 and moved to McComb, operating a Western Auto during the war years.

In 1943, they moved to a farmhouse on 200 acres in Brookhaven — with no electricity or running water at the time — and set out to raise a family. She and Bill had two sons, Jim and Harry. She would lose Bill in 1986, and for the next 33 years she would wear her wedding rings.

Taylor worked various part-time jobs so she would have time to raise the couple’s sons. She was a Cub Scout leader and belonged to clubs that allowed her to stay busy and give back to the community.

A member of FUMC since 1943, she has served as financial secretary and director of religious education. In the latter capacity, she helped organize the kindergarten program at the church, which continues to thrive today.

She said she was encouraged to get the program started because she wanted to fill the “needs of the children.”

She was recognized as the church’s Outstanding Senior Adult in 2004, but her son believes she has been outstanding for a century.

“I think people have the wrong attitude about their age. I think it’s something to be proud of. You’ve done a lot of things right if you make it to 100,” Harry Taylor said.

Taylor still lives in same house she’s called home for nearly 80 years. She wakes up when she feels like it.

“Just when ever the Spirit moves me,” she said.

She follows no certain routine, and eats whatever she finds in the cabinet or refrigerator. She never drank or smoked, but she likes the occasional Coca-Cola. Mr. Coffee is her friend.

She likes her cup hot and fixed pretty. That’s extra cream and sugar.

Harry lives at home to take care of his mother. He turns off the Mr. Coffee by mid-afternoon.

“I have to cut her off about 4 in the afternoon because it keeps her awake at night if she drinks too much caffeine,” he said.

Taylor said she’s always been a go-getter who liked to stay busy. She believes that’s helped her accomplish her goals through the years.

Harry Taylor said his mother’s optimism has always inspired him.

“Most of the time throughout her life she’s seen the glass as half full and not half empty. I think that’s helped her,” he said.