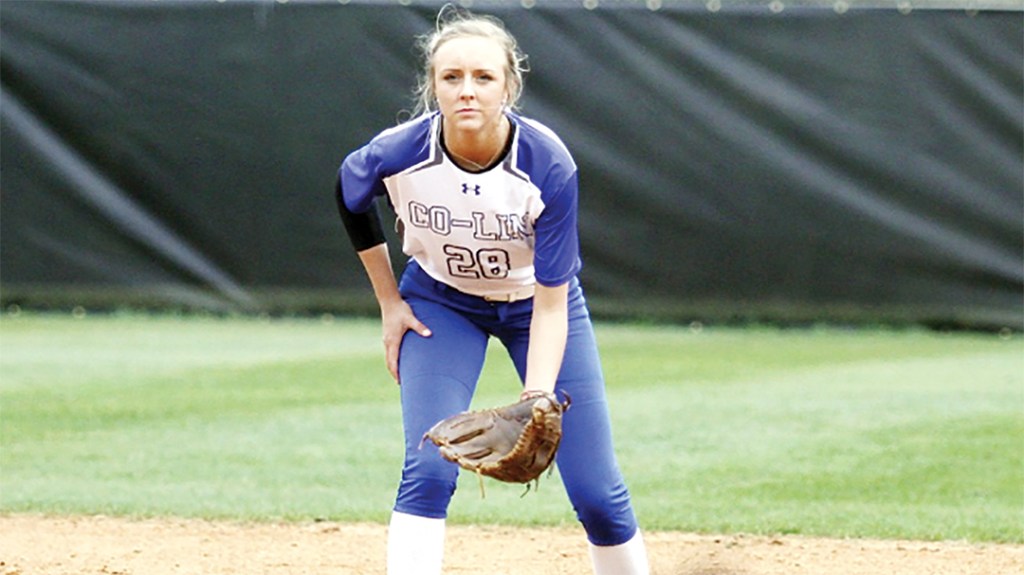 Photo by Co-Lin Sports Information Copiah-Lincoln sophomore Makenzie Smith (Loyd Star) and the Lady Wolves (12-3) are back at home on Saturday when they host Coahoma for a pair of games beginning at 2 p.m.

The No. 13 Co-Lin Lady Wolves bounced back in the nightcap Wednesday with a 5-2 to win to earn the split against No. 8 Mississippi Gulf Coast after dropping game one 8-0.

The win stopped a three-game losing skid and move the Lady Wolves to 12-3 on the year and to 3-1 in MACJC play. Mississippi Gulf Coast moves to 11-7 overall and 3-1 in league play.

Co-Lin is back in action at home this Saturday, as the Lady Wolves take on Coahoma in Wesson. First pitch of the doubleheader is set for 2 p.m.

The Lady Wolves struggled to get the bats going in the opener as the Lady Bulldogs ran away with an 8-0 victory.

One bright spot in the game was a double from Hannah Walls in the fourth inning. Mississippi Gulf Coast drove in one run in the third, five in the fourth, and two in the fifth to secure the win.

Kaytlon Ward took the loss for Co-Lin. She lasted four and a third innings, allowing six hits and seven runs while striking out three.

Co-Lin refused to let game one keep them down as the Lady Wolves roared back in the nightcap. The Lady Wolves were first on the board after Julie Scheuermann drove in Callie Fortenberry in the first inning.

Harmoni Ashley came up big in the top of the third with a ground ball up the middle. The double plated Walls and Scheuermann to grow the Lady Wolves’ lead to 3-0.

The Lady Bulldogs cut that lead to just one in the bottom of the third with a two-run homer, but Co-Lin kept the bats hot in the fourth with an RBI single from Marley Poole to stretch the lead to 4-2.

Ashley cranked a solo homer in the top of the seventh for an insurance run to secure the 5-2 victory.

Mackenzie Gros pitched Co-Lin to victory as she went the distance in the circle. The sophomore allowed two runs on five hits, striking out three and walking one.

Co-Lin was much more productive at the plate as the team racked up nine hits led by Ashley, Scheuermann and Walls with two each.