Panther track to compete at invitational 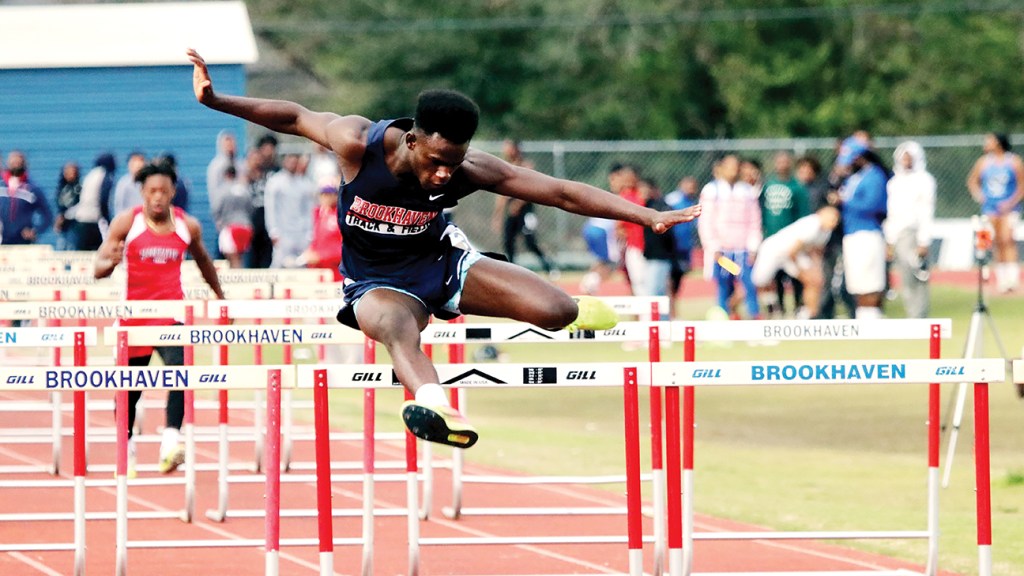 Photo by Terri Mabile Brookhaven High sophomore Dontrae Smith leaps over a hurdle in a recent meet for the Panthers. Smith won the 110-meter hurdles for BHS at their Speed Trials meet. BHS runs next on Saturday at Ridgeland High in the Bianca Knight Invitational.

The Brookhaven High track teams are headed to Ridgeland High Saturday for the Bianca Knight Invitational. The meet will be a large one that draws teams from all around the state.

Knight was a decorated track athlete at Ridgeland High who went on to run at the University of Texas and won a gold medal in 2012 at the London Olympics running the 4×100 relay.

Jacob Britt of BHS won the 1600-meter race and the 3200-meter run. His teammate Grayson Childress finished second in both events. Jake Thompson of BHS was third in the 1600 and Sam Arnold — another Panther — was third in the 3200.

Freshman Kyja Willis won both the 100 and 200-meter dashes for the Lady Panthers. Genesis Frazier and Aniyah Cook were second and third respectively in the 100-meter final.

Ellie Slay of BHS won the 1600-meter finals for BHS. Her teammates Miyah Miller and Bailey Pounds were second and third respectively. Bailey Pounds won the 3200-meter race for BHS with Gracie Gray and Carley Craig sweeping the other top two spots for the Lady Panthers.

Ayanna McNairy was another Lady Panther who had a dominating day as she won the long jump and triple jump.

Jaquarius Edwards was second in the 100-meter dash for BHS and Davion Smith finished third in the 200-meter race.

Leondre Dodds won the 800-meter run for Loyd Star. Freshman Collin Kellum came in third in the same race. Norman Woodard of BHS finished second in the 300-meter hurdles. The Lawrence County boys edged out North Pike and. McComb in the 4×100 relay finals.

Isaiah Wall and Quintaye Bates were second and third behind Alijah Martin of North Pike in the high jump. Travon Lee of BHS was third in the discus.

Jakiyah Pendleton finished third in the high jump for BHS and Ah’Menya Rancifer finished second in the shot put for the Lady Panthers.