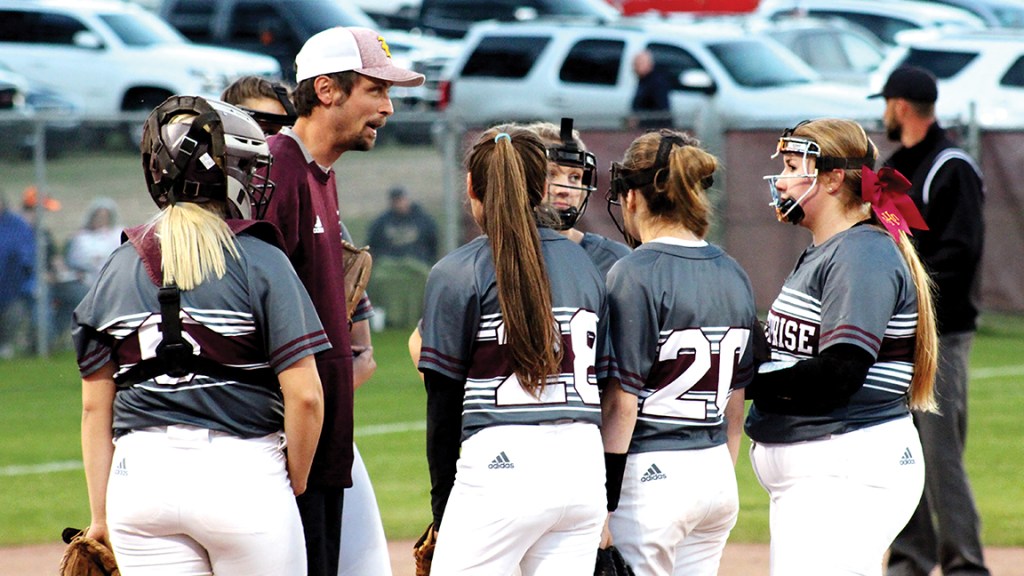 Photo by Katie Furr Enterprise coach Trace Abdul-Hadi talks with his team Thursday against Bogue Chitto. The Lady Jackets will host West Lincoln and Loyd Star next week in a pair of Region 7-2A games.

Here is a roundup of Thursday area softball results.

The Lady Cats only led 1-0 after two innings before exploding for eight runs in the third. They also scored 11 runs in the sixth inning.

Codi Leggett of Bogue Chitto went 5-of-6 at the plate with a double, a triple and nine RBIs. Baileigh Jackson finsiehd 3-of-5 with four RBIs and a pair of doubles. Julie Anna Bartram and Karly Leake also had a double apiece for coach Kris Smith.

Frazier pitched the win after striking out four and giving up seven hits on 115 pitches through six innings.

Anna Jergins and Natalie Harris had a double apiece for Enterprise (1-7) and both finished with three hits each. Alanna Carter also hit safely for EAC and Ainslee Jergins had an RBI for the Lady Jackets.

Thursday they took control of the game early with three runs in the first and five in the second inning. Carson Hughey pitched the win for coach Jan Delaughter after striking out three and scattering six hits in seven innings.

Hughey was also on fire at the plate as she went 4-for-5 with a double and a triple. Johnna Norman also had a double and a triple for LS. Norman drove in a pair of RBIs as did Alyssa Legget. Malori Cade was responsible for three RBIs and Carly Beth Wallace also drove in two runs. Meagan Poole and Aly Floyd also hit safely for LS.

The Lady Bears were done in by five errors in their second straight loss. Morgan Newman hit a double for WL while Adi Paden and Bailee Goodson had two hits apiece. Mary Claire Johnson, Mailey Kate Young and Heidi Smith all hit safely for the Lady Bears.

Camryn Summerall, Goodson, Young and Adi Paden all had an RBI apiece for coach Andrew Redd.

The Brookhaven High Lady Panthers (5-6-1) went on the road Thursday and smashed the Salem Lady Wildcats 17-1 in Walthall County.

Lynsey Nations picked up the win in the circle after giving up one unearned run in two innings and striking out two. Meg Foster pitched an inning and gave up one hit.

BHS plays in the South Jones Tournament today along with Loyd Star and Wesson.