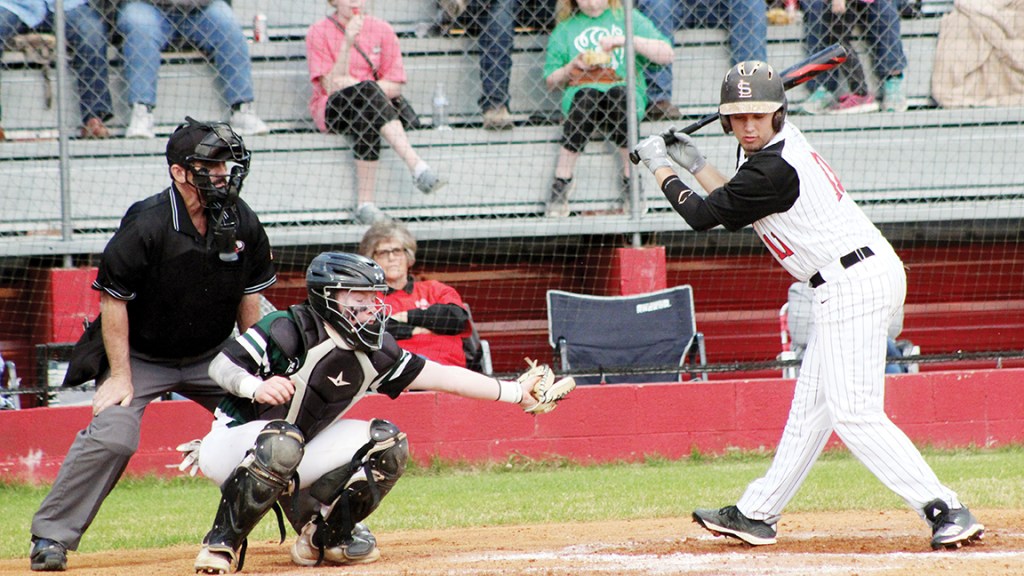 Photo by Cliff Furr Loyd Star senior Brent Cade pulls back from an inside pitch against Pisgah Friday at Smith Field. Loyd Star hosts Enterprise tonight in a key Region 7-2A matchup.

Leading by two, with two outs in the final inning of the game, and with the bases loaded — Loyd Star senior Rials Hester needed four pitches to strike out Jackson Swales of Pisgah Friday night to end the game and give the Hornets (7-6) a 5-3 win over the visiting Dragons (4-7) on Smith Field.

Junior left-hander Reese DeHart had pitched masterfully all game for coach Jared Britt and his Hornets. DeHart struck out seven and walked five on 119 pitches as he gave up three runs off four hits.

With two outs in the seventh, it appeared that DeHart would get the complete game shutout, but Pisgah was able to extend the game when Ben Arnold reached first on a hard to field ball towards LS third baseman Wyatt Hodges. The Dragons then scored their first run of the game on a line-drive to centerfield and after walking the next batter to load the bases, Britt pulled DeHart and replaced him with Hodges on the mound.

Hodges gave up a single and then walked in a run that pulled Pisgah within 5-3 and forced Britt to put Hester on the hill.

“You hate it for Reese because he pitched his tail off and deserved to get the complete game shutout,” said Britt. “Rials is a senior and a guy we trust to make plays for his team and he did that for us tonight.”

Britt took his time addressing the team in left field after the game. He was speaking on the need to finish a team off when momentum is on your side. His Hornets started hot but began to fall into a late lull that allowed Pisgah to climb back into the game.

“We left some runs on the bases tonight,” said Britt. “Didn’t move runners over and didn’t capitalize on some opportunities we had. That’s what I was telling them, you can’t let a good team hang around within striking distance.”

With seven seniors on a 19-man roster, the Hornets are by far the most experienced team in Region 7-2A.  Leadoff batter and centerfielder senior James Beard has already signed a letter of intent to play baseball next season at Meridian Community College.

You didn’t read about Beard signing with the Eagles in the paper because the senior didn’t want a fuss made over his accomplishments.

“James is very low-key,” said Britt. “He doesn’t want any kind of spotlight, he just wants to play ball.”

Considered by many to be the fastest baseball player in the state, Beard isn’t flying under the radar with Major League Scouts. On Friday there was a scout from an AL East club there with a stopwatch on him. Earlier in the week during a 9-1 win over St. Andrew’s in Ridgeland the fence-line was packed with MLB scouts watching Beard.

Beard was the leadoff man for LS two years ago when they won the 2A state championship. He’s transformed from that skinny, fast kid by adding 15 pounds of muscle since last season. He got the game started in the first inning when he was hit by a pitch and then easily stole second.

Beard would tag up and reach third base on a flyout by Dylan Case and then score to put LS up 1-0 in the first when Hester hit a ground ball that was misplayed by the Dragon defense for an error.

In the bottom of the second baseman Logan “Poe” Smith singled to get the LS attack started after Brent Cade had previously drawn a walk. Both runners would move up after a passed ball and then Cade scored on a single by Hodges. Smith would score later in the inning as the half ended with Beard getting caught stealing second.

Smith hit a flyball in the fifth that was dropped by Pisgah right fielder Noah Thweatt. The error scored Hester and DeHart and gave LS a 5-0 lead after five innings.

Tuesday night, the Hornets begin division play as they host Enterprise (7-2-1) for a matchup of the two Region 7-2A favorites. Friday the Yellow Jackets host the second game in the series. Enterprise is 2-0 in the region after sweeping Bogue Chitto last week.

Last season the division format had the teams playing three-game series for region matchups. Enterprise won two of three over Loyd Star but dropped a division game to Bogue Chitto that allowed the Hornets to claim the region title.