Where will the state’s money go? Legislators address questions 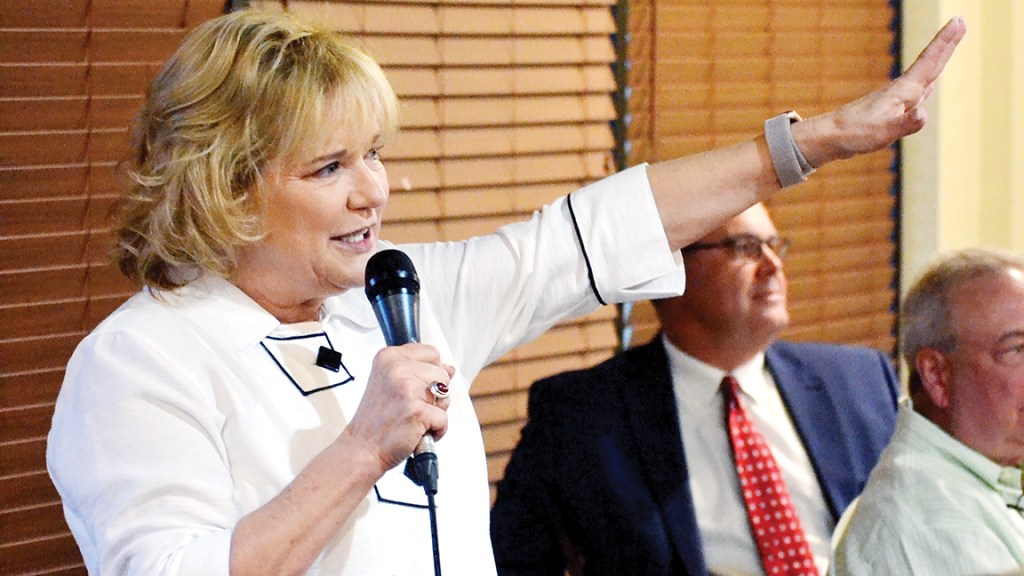 Photo by Donna Campbell Rep. Becky Currie, of Brookhaven, gives updates on current legislation at the annual end-of-session breakfast hosted by the Brookhaven-Lincoln County Chamber of Commerce at Mitchell’s Events and Catering.

With less than a week left in the legislative session, Brookhaven’s three lawmakers met with local constituents to go over some of the hot topics they’ve tackled in Jackson these past few months.

What the state’s money will fund seems to be the biggest concern the three legislators faced.

Mangold, a poultry and cattle farmer finishing his first term, said he foresees a pay increase for the state’s teachers.

“I believe in my heart a raise is coming,” he said.

That is likely, however, legislators haven’t finalized an amount.

Currie, a registered nurse employed with Kindred Home Health and Hospice, said teachers won’t be the only group to see a hike in their paychecks. She said all state employees, many who have not received raises in a decade, will get it this year.

She said teachers, besides the $4,000 raise talked up in Jackson, will get their 4 percent mandated raise.

“When you combine all that, I’m hoping the teachers will be OK,” she said.

She wants all state employees to get raises, too.

“If you had a pay raise in the last two or three years you will not get one this year,” Currie said. “There has to be some kind of cutoff. The money’s not everflowing. You will get a pay raise if you’ve not previously just had one.”

Legislators will likely vote on their last day in session.

“I hope that it comes out well. We’re all praying that it does,” she said.

Currie said the economy is good.

“That we have the ability to make these pay raises right now is a good thing,” she said. “We’re trying our best to be fair and equal.”

Doty, a Brookhaven attorney, said the proposed teacher raises will put a strain on the economy, even though Currie said the economy is good.

“Our revenue projection, I don’t believe, is that high and has that money available,” Doty said. “We have limited funds. We can’t just print that money in the basement.“

Currie tackled a question from the audience on road and bridge funds.

“So this next year, you will have a lot more money starting to come,” she said. “It will bypass us and go directly to your cities and counties. I know everybody in here has got a road they’d liked to see fixed. I’m sure the supervisors and the aldermen will be on that when that money comes through.”

She said lawmakers have met many times with the Ways and Means committee.

“We are pounding the pavement, shaking the bushes, making sure we get that money. That will be a huge difference in how many bridges you see closed and reopened here in this county.”

Doty gave a status report on House Bill 366, which she helped push through the Senate, that will allow the state’s 25 electric cooperatives to form subsidiaries to offer broadband internet service. They’re currently banned by state law from doing so.

The measure allows cooperatives to invest money, loan money or guarantee loans to affiliates, but says they can’t use revenue from electric sales to subsidize broadband.

Doty said it seems like a “no-brainer” to allow co-ops to “provide those services out in areas that do not have service” but she heard many concerns from the cable industry about competition.

“At the end of the day, what we realized is we needed to give this opportunity to our electric co-ops,” she said. “Not every electric co-op is going to jump in this business right at the beginning — I think there are only about four who are ready to really make this a reality — but I think as more and more across the state get into this business I think that we will see more coverage across our state.”

Mangold had success this session with what he calls the “fake meat” bill. It will force companies that produce a pink food substitute that is made to replace meat to label it correctly.

“They should not be allowed to call it meat, because it’s not meat,” he said.

He explained the science behind it, saying a cell is combined in a petri dish with chemicals to make it the color and smell of ground beef that will even sizzle in a hot pan.

“When you ask people, ‘Do you want to know what you’re eating,’ the answer is usually ‘Yes,’” he said.