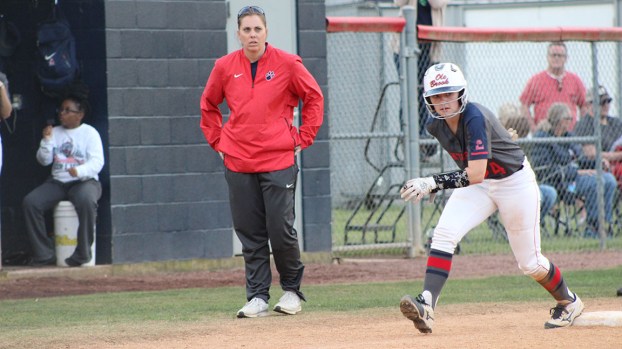 Photos by Cliff Furr Brookhaven High School junior Madi Miller inches towards home plate on Monday against Clinton. Miller gained third base on a triple in the first inning, but would be the only run scored in the game for BHS in a 13-1 loss. 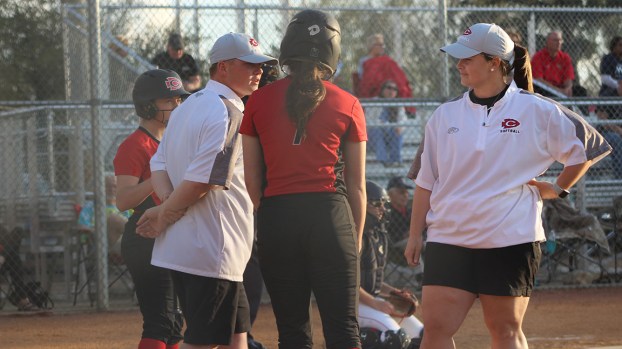 Coach Karla White of Clinton High talks with Rowan Braley before first pitch on Monday at Lady Panther Park. White, a Lincoln County native and Enterprise alum, is in her fourth season as head coach at Clinton. Assisting her is her husband Cody White.

The Clinton Lady Arrows (11-3) used a strong pitching performance by Kaylei Peterson and a big first inning offensively in cruising to a 13-1 win over the Brookhaven High Lady Panthers (7-7-1) Monday night.

Peterson struck out 10 and allowed four hits while only walking two on 99 pitches over seven innings. Clinton is coached by Enterprise alum Karla Hux White. White has her husband Cody serving as an assistant on her staff and coaching third base. Now in her fourth season, White — who also played at Copiah-Lincoln and Mississippi College — has led her team to the second round of the 6A playoffs three years in a row.

The Lady Arrows scored seven runs in the top half of the first inning as Ole Brook would commit nine errors on the night.

Coach Mandy Vinson and her BHS team are coming off of a 22-6 season last year that saw them eliminated by Pearl River Central in a close second round playoff series. Last season the Lady Panthers used a pair of seniors in Haley Nations and Jaydn Fuller in the circle. Replacing those arms is a big part of what Vinson and her team are trying to accomplish as the season progresses.

Nations’ younger sister Lynsey has moved to a pitching role after just making three appearances at the position as a sophomore.

“We had a tough inning the first inning and when Lynsey settled down some the defense did too,” said Vinson. “The pitcher sets the tone for our night and Lynsey is getting better and better each game for sure. Her getting better is going to come with the more experience she has.”

Vinson called a timeout to huddle her team in the circle during the big Clinton run in the first inning. Her displeasure was with how slow the defense was to track the ball and get it in from the outfield. The Lady Panther outfield is very short on experience as BHS has one senior — shortstop Kat Wallace — on their roster.

“We’re starting an eighth grader, a freshman, and a junior playing her first year of softball in the outfield,” said Vinson. “I called them together because we weren’t hustling. Losing is sometime part of the game, but I never want to be out-hustled.”

Brookhaven got on the board in their half of the first due to the hustle of lead-off batter Madi Miller. Miller worked a long at-bat against Peterson that ended with her slapping a pitch all the way to the left field fence. Miller never checked up as she rounded the bases and hustled into third with a triple.

A Nations double would then score Miller to get BHS on the board. The loss broke a five-game winning streak for BHS as the Lady Panthers won a pair of games in blowouts — 12-2 over South Jones and 17-2 against Seminary — on Friday in the South Jones Tournament.

BHS is 2-0 in their division as Natchez is the only other member of the region fielding a softball team this season. The Lady Panthers will play at Loyd Star Friday at 6:15 and have a remaining schedule that is filled with games against area competition before the 5A playoffs begin in mid-April.

“Our devotions this year have centered around commitment, hustle, and grit,” said Vinson. “That’s the type of players we want to develop. Sometimes we may play teams that have a little more talent than we do, but I always want our kids to walk off the field knowing they left it all out there and hustled every chance they got and played gritty. A gritty player can change a game quickly.”