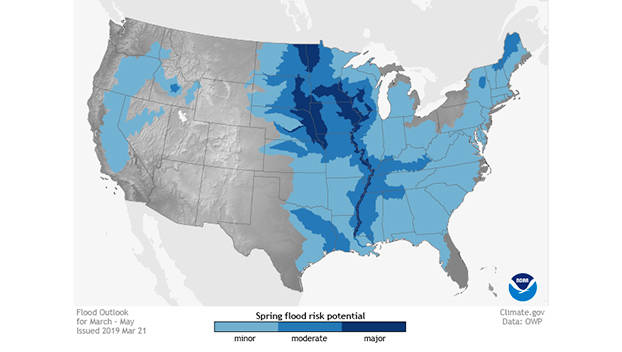 The National Oceanic and Atmospheric Administration released its 2019 spring outlook for flooding.

As levels drop on the Mississippi River, weather forecasters warn what goes down may come back up later this spring.

Earlier this week, the National Oceanic and Atmospheric Administration released its 2019 spring outlook for flooding, temperature and precipitation.

In the long-range forecast, the potential for significant flooding is predicted for much of the Mississippi River.

Marty Pope, a hydrologist with the National Weather Service in Jackson, said the 2019 spring outlook is different than the 16-day forecast which officials use to develop short-range weather forecasts.

On Saturday, the Mississippi River stood at 57.4 feet in Natchez and was slowly dropping.

Short-range forecasts for the Mississippi River in Natchez show the river dropping below flood stage on April 15 and continuing to fall. The forecast only takes into account precipitation predicted for the next 48 hours, Pope said.

Unlike the 16-day-forecast, Pope said the 2019 spring outlook looks at the current conditions, including ground saturation, snow measurements, and other data, and uses historical data to determine the potential for flooding several months out. The spring outlook released Thursday is for April through June.

Pope said because the Mississippi River Valley above Jackson and the Ohio and Tennessee River valleys have received more than 150 percent of average rainfall so far this year. The wet conditions make conditions ripe up and down the river, Pope said.

“Based on the 16-day forecast, we are going to continue to see a drop in river levels,” Pope said. “But that doesn’t mean we are totally out of the woods yet.”

Pope said many factors including when the spring thaw occurs in the northern part of the country, and the amount of rain that will fall this spring is harder to predict.

The spring outlook predicts an elevated chance for above-average precipitation for much of the Southeast including South Mississippi and most of Louisiana. The outlook also predicts above average temperatures for the Southeastern United States.

“We still have to wait on the snowmelt, and we have the potential for some good spring rains,” Pope said. “It takes one storm to stall out, and, boom, we are back to where we were.”

Man dies after shot in fight over his dog attacking neighbor

JACKSON— A Mississippi man has died after he got into an argument over a dog attack and his neighbor shot... read more