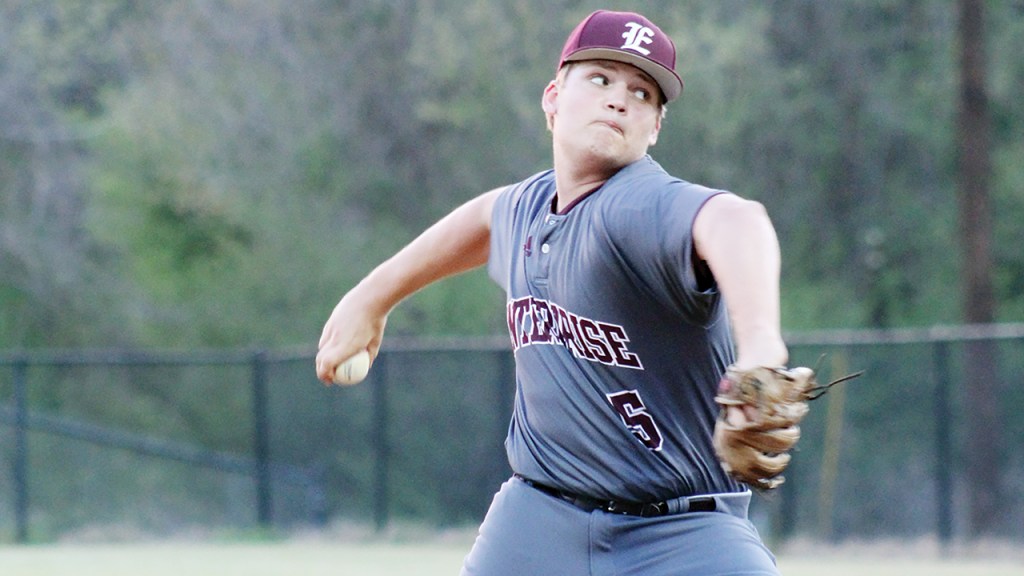 Photo by Katie Furr Landon Gartman of Enterprise delivers a pitch Tuesday against Loyd Star. A Pearl River CC signee, Gartman struck out 12 in a win that moved EAC to 5-0 in Region 7-2A play. The two teams meet again Friday at Enterprise at 7 p.m.

As he’s been all season, Enterprise (8-2-1) senior pitcher Landon Gartman was in the zone Tuesday as he struck out 12 Loyd Star Hornets (7-6) in an 8-2 Yellow Jackets win.

“This was a big win for us against a good team,” said Enterprise coach Cass Brister. “Gartman pitched a great game and I thought our at-bats were better tonight than they have been lately.”

The Jackets outhit the Hornets 9-4. Both teams got a single run in the first inning. EAC got on the board with a Colby Beard double that scored courtesy runner Wyatt Burns. Burns was running for leadoff batter Hunter Richardson who drew a walk to start the game.

James Beard would start the LS half of the first inning off with a walk. Later in the inning Beard scored on a Reese DeHart single.

Enterprise went up for good in the third when Loyd Star pitcher Dylan Case walked in a run to put the Jackets up 2-1. In the top of the fourth Austin Fulger scored on a Colby Beard single. The next batter — Trenton Tarver — hit into a fielder’s choice that scored Matthew Burns to put the lead at 4-1.

In the top of the seventh EAC broke the game open with four more runs. Loyd Star committed four errors and Enterprise made three in the game.

Dylan Case took the loss on the mound for LS after walking eight and striking out eight in six innings. Case gave up eight hits and five earned runs on 120 pitches. He also hit a double at the plate.

Fugler pitched the final out for Enterprise and struck out one and walked one on nine pitches. A junior south-paw, Fugler is coming off a 19-strikeout performance last week in a win over Bogue Chitto.

He’s the probable starter when the two teams meet again on Friday at 7 p.m. The win on Tuesday puts EAC in control of Region 7-2A with a 5-0 record after sweeps of Amite County and Bogue Chitto earlier this season. Loyd Star sits at 2-1 in division play after picking up a pair of wins over Bogue Chitto prior to Spring Break.

“We’ve got some defensive mistakes that we need to clean up because Loyd Star will be ready to bounce back on Friday,” said Brister. “Good win, but we can’t be satisfied.”