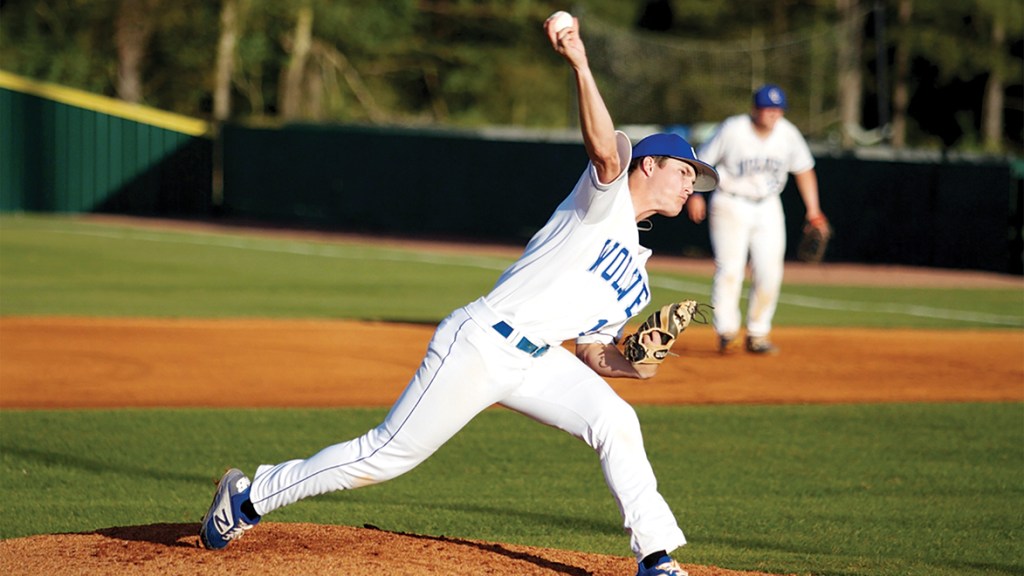 Photo by Co-Lin Sports Information Copiah-Lincoln pitcher Konner Allen (Loyd Star) delivers a pitch Wednesday against Mississippi Gulf Coast. Co-Lin next plays at home on Tuesday when they host Southwest Mississippi in a doubleheader that begins at 3 p.m.

The Copiah-Lincoln Community College Wolves dropped a pair to the Mississippi Gulf Coast Bulldogs Wednesday to fall to 10-9 overall and to 3-5 in MACJC play, while Gulf Coast improved to 15-5, 7-1.

The Wolves are back in action on today in Booneville, as Co-Lin travels to Northeast Community College. First pitch of the MACJC doubleheader is slated for 1 p.m.

Co-Lin is back in Wesson on Tuesday, as the Wolves face Southwest for games two and three of the Coca-Cola Classic presented by Powerade.

Game one of the MACJC doubleheader slipped away from the Wolves early on Wednesday night as the Bulldogs pushed across three runs in the second inning. The runs came from a two-run triple from Preston Stringer and an RBI single from Miller Hancock.

Gulf Coast broke the game open in the fourth as they added another six runs off a sacrifice fly, an RBI single, an error and a home run. The big inning put the Bulldogs on top 9-0 after three and a half innings.

The Wolves got their bats going in the bottom half of that frame with an RBI double from Brooks Italiano that plated Trey Frierson and Joshua Day, who led off the inning with back-to-back singles, to cut the lead to 9-2.

Gulf Coast added another pair in the top of the fifth to pull away to an 11-2, before Ryan Zimmerman drove in Frierson with an RBI double to right field.

The Bulldogs posted a solo homer in the sixth and scored another three in the seventh to push the lead to 15-3.

Zach Smith took the loss for the Wolves as he surrendered three runs on five hits over three innings, striking out two and walking one with the start. Bryce Henry, Lane Hanna and Jay Smith all saw time on the bump for the Wolves.

Frierson led the Wolves at the plate with two hits in four at-bats, while Italiano’s two RBIs led the way.

The Wolves struck first in the nightcap as Mark Hubbard drove in Day with an RBI single to put Co-Lin up 1-0.

The Bulldogs hit back in the top of the second with a two-run home run from Dee Hawthorne to get on top 2-1. An RBI single later in the frame would grow the lead to 3-1.

Another long ball benefitted Gulf Coast in the top of the third. The two-run shot pushed the lead to 5-1.

Zimmerman cut into that lead in the bottom of the third with an RBI single to plate Frierson before Italiano hit an RBI-groundout to bring the Wolves within two, 5-3.

Gulf Coast continued to capitalize on the big bats with yet another homer in the fifth, this time from Hancock. An RBI-groundout later in the inning pushed the lead to 7-3.

Konner Allen took the loss for the Wolves. He lasted three innings, allowing six hits and five runs while striking out two and walking one, while Josh Day led Co-Lin at the plate with two hits in four at-bats.