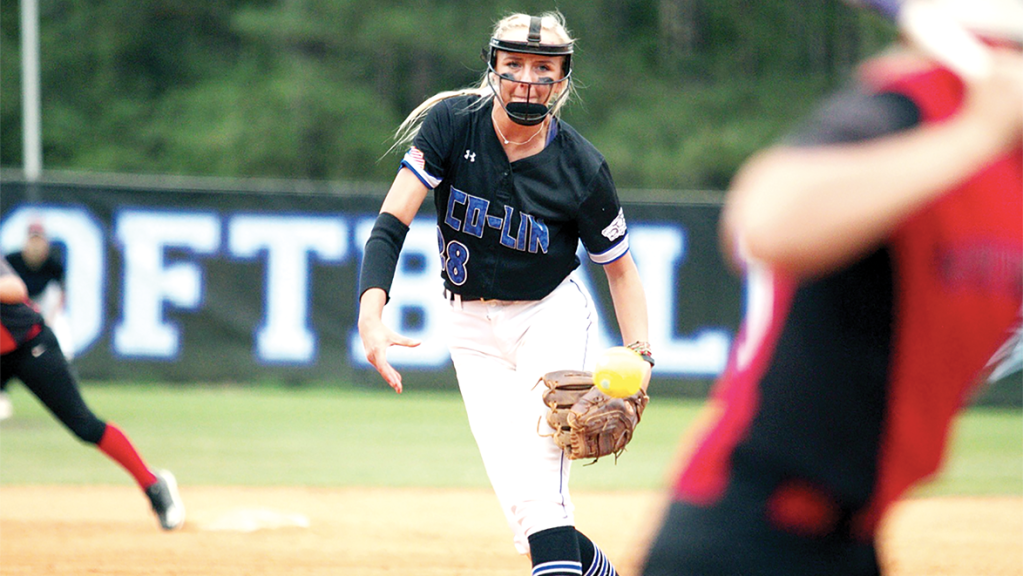 The wins move Co-Lin to 18-3 overall and give the Lady Wolves a lot of momentum going into arguably their biggest game of the year, a road matchup with No. 1 Jones College in Ellisville on April 8.

The Lady Wolves bounced back from a tied ballgame going into the bottom of the fifth with five runs over their last two at-bats.

Baton Rouge led early with two runs in the top of the first with an RBI double from Bailey Duhon.

The Lady Wolves quickly cut into that 2-0 lead with back-to-back singles in the bottom of the frame and an RBI-groundout from Harmoni Ashley to make it 2-1.

Carly Polk put Co-Lin on top for the first time of the day in the bottom of the second with a line drive homer to left field. The two-run shot put the Lady Wolves up 3-2. Julie Scheuermann capitalized on that momentum later in the inning with an RBI single to plate Callie Fortenberry to stretch the lead to 4-2.

The Lady Bears knotted the game at 4-all in the top of the fifth with an RBI single and an RBI triple from Blayne Pence.

Co-Lin came back in a big way with a solo homer from Delaine McMillian in the bottom of the fifth. Kelsey Mobley followed later in the inning with an RBI-groundout to push it to 6-4.

The Lady Wolves got some insurance runs in the bottom of the sixth with a two-run homer from Ashley, and a sacrifice fly from Polk to solidify the 9-4 win.

Kaytlon Ward earned the victory in the circle as the freshman went the distance, allowing four runs on six hits, striking out three and walking zero.

McMillan led the Lady Wolves at the plate with three hits in four at-bats, while Polk and Ashley posted a team-best three RBIs.

The nightcap was a low scoring affair early on as the Lady Bears pushed across a run in the top of the second off a double.

The Lady Wolves did not strike back until the bottom of the fourth when McMillian hit a sac fly to shallow right and allowed Scheuermann to tag up from third. After interference at the plate, the Lady Wolves were awarded the run. Polk used that momentum and ripped an RBI-groundout to put Co-Lin on top 2-1.

Baton Rouge refused to give in as the Lady Bears manufactured another run in the top of the fifth with an RBI single. The bunt tied the game at 2-2 going into the bottom of the fifth.

Co-Lin caught a break in the bottom of the fifth after Fortenberry roped a single. Marley Poole hit a high fly ball into the gap in right field, and miscommunication by the Lady Bears allowed the ball to drop, which scored Fortenberry all the way from first. The run put Co-Lin on top 3-2.

The Lady Bears threatened late after putting two runners on the bases in the top of the seventh. A wild pitch moved the lead runner to third with just one out, before Ward re-entered the game. A strikeout from Ward and a run-saving diving catch from Katelyn Hayman in left field for the final out secured the win.

Mackenzie Gros got the win for the Lady Wolves in the circle. She lasted four and a third innings, allowing four hits and one run while striking out two in relief. Makenzie Smith started the game. She surrendered one run on five hits over two innings, striking out one.

Fortenberry led the Lady Wolves at the dish with three hits in three at-bats, Co-Lin’s only hits of the contest.