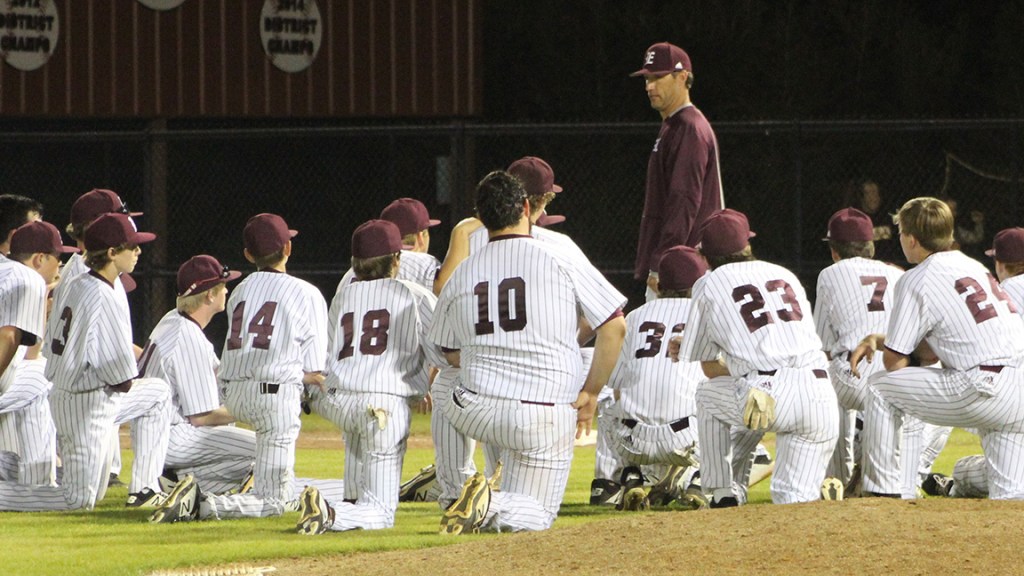 Photo by Cliff Furr Enterprise coach Cass Brister addresses his team earlier this season after a loss to Loyd Star. On Tuesday the Jackets outhit West Lincoln 9-2 on their way to a 10-1 win. The two teams meet again at Enterprise Friday at 7 p.m.

Enterprise senior pitcher Landon Gartman was dominant again on Tuesday as he struck out 18, gave up two hits and one unearned run in a 10-1 Yellow Jacket (9-4-1) victory over West Lincoln (4-6).

Hunter Richardson went 3-for-3 at the plate with three RBIs and a pair of home runs for coach Cass Brister and the Jackets. Dylan Carter also homered.  Austin Fugler had a pair of hits for Enterprise including a triple. Chase White provided the other EAC extra base hit with a double. John Burns and Dustin Prather all also hit safely for Enterprise.

Travis Hall and Taylor Allen were the two Bears who got a hit for coach David Gilbert. Allen and Gavin Burris split time on the mound for the Bears with Burris giving up two earned runs on five hits in three innings. Allen surrendered five earned runs on four hits in four innings.

“I thought we played really well at times tonight and finished really strong at the plate,” said Brister. “Hunter had a big night and guys like Carter and White came up big in some spots for us. Landon was lights out again and it’s crazy how good he’s been this season.”

Enterprise hosts the second game of the series Friday at 7 p.m.