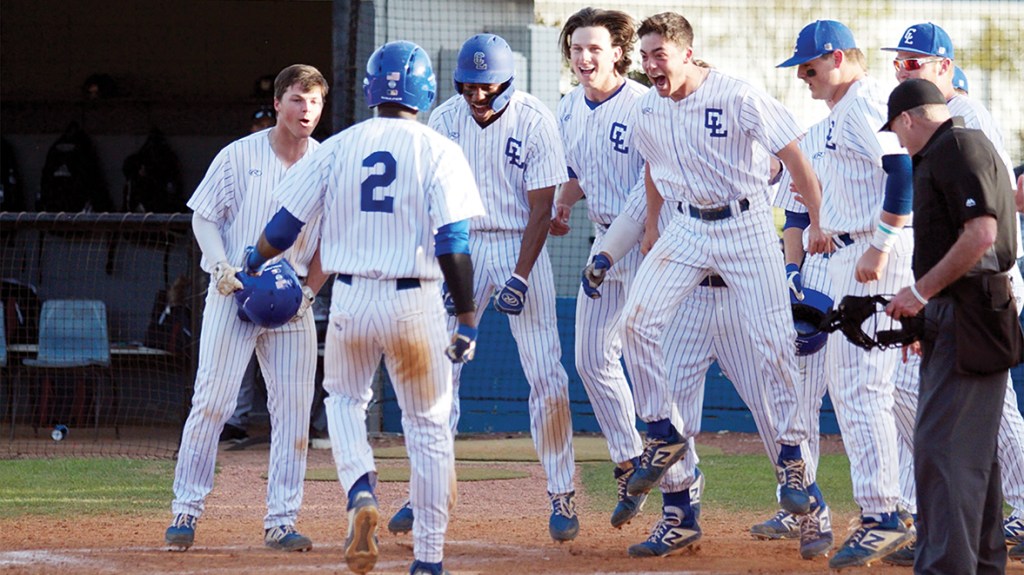 Photo by Co-Lin Sports Information Copiah-Lincoln freshman Joshua Day is mobbed at the plate after hitting a walk-off grand slam against Southwest Mississippi on Tuesday. Co-Lin hosts Coahoma on Saturday beginning at 2 p.m.

The Copiah-Lincoln Community College Wolves claimed the Coca-Cola Challenge series in thrilling fashion Tuesday as a walk-off grand slam took game one and a run-rule victory in the nightcap moved Co-Lin to 3-0 over Southwest on the year.

The victories moved the Wolves to 13-10 overall on the year and to 6-6 in MACJC play, while the Bears fell to 10-15, 2-10 on the year. The Wolves are back at Sullivan Field in Wesson Saturday at 2 p.m. as the Coahoma Community College Tigers make the trip south.

After one run for each squad in the top and bottom of the first, the game was knotted early. Southwest pushed their run in on a sacrifice fly before the Wolves tied the game at 1-all with an RBI single from Justin Johnson.

The Wolves finally struck again in the bottom of the fourth with a line drive to left from Houston Mims. The hard-hit single scored Brooks Italiano, who led off the fourth with an infield single, to put Co-Lin on top 2-1.

Southwest’s bats got hot in the top of the eighth as three RBI singles not only tied the game but also gave the Bears a late 5-2 advantage.

Johnson got his second RBI of the day in the bottom of the frame as the freshman roped another line drive to left. The shot cut the lead to 5-3 going into the ninth.

Co-Lin gave up a walk in the top of the ninth but settled in defensively and closed out the inning to head to the plate for a final time.

Clint Stephens got things going in the ninth with a walk before Thomas Slagle moved him to third with a single. Ryan Zimmerman stepped up and smashed an RBI single to right field to cut the Bears’ lead to 5-4. After another walk, Joshua Day stepped to the plate. Day battled in the box with a full count, before smashing a towering walk-off grand slam to deep left field that lifted the Wolves to the 8-5 victory.

Austin Tidwell earned the win on the mound. He allowed zero hits and zero runs over one and one-third innings, striking out one and walking one. Thomas Smith and Adie Goodman entered the game out of the bullpen and helped to close out the game in relief, while Konner Allen got the start.

Italiano led the Wolves at the dish in game one as he got three hits in four at-bats, while Day’s four RBIs led the team.

The Bears once again got on the board early in the top of the first, but Co-Lin broke the game open in the bottom of the third with three runs.

The runs came from a two-run bomb from Zimmerman to deep right center, while Joshua Day scored later in the inning on a wild pitch.

Southwest got one back in the top of the fourth, but once again the Wolves responded with a run. Mark Hubbard hit a sacrifice fly to deep left in the bottom of the frame to stretch Co-Lin’s lead back to two, 4-2.

The Wolves grew that lead to 8-2 in the bottom of the fifth after an error scored two runs followed by back-to-back RBI singles from Stephens and Hubbard.

That lead continued to pile up as Italiano cranked his first career home run in the bottom of the sixth. The three-run shot plated Trey Frierson and Day who both singled to lead off the sixth. Co-Lin would go on to win the game in the frame as Zimmerman was hit by a pitch after back-to-back walks that loaded the bases to give the Wolves a 12-2 run-rule win.

Cameron Hill was credited with the victory for the Wolves as the freshman went the distance in the abbreviated contest. He went six innings, allowing two runs on six hits, striking out seven and walking zero.

Frierson led Co-Lin as he rattled off three hits in four at-bats, while Stephens, Italiano, and Zimmerman each posted two. Zimmerman and Italiano’s long balls helped give the pair three RBIs each.