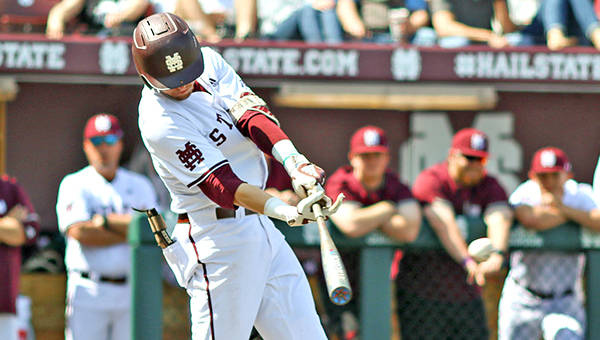 Some baseball teams find success with a strong pitching staff, some with defense or speed on the basepaths. Others work the margins of advanced statistical analysis to gain an edge.

Mississippi State is doing it the old-fashioned way — by bludgeoning opponents into submission with brute force.

The Bulldogs lead the Southeastern Conference and rank second in the country with 279 runs scored this season. They’re fifth in Division I with 9.3 runs per game.

Wednesday’s 21-8 victory over Louisiana-Monroe marked the 12th time in 30 games that they’ve scored in double figures, and the second time they’ve reached 20.

The big output — and the victory — was also a nice rebound for the Bulldogs after they were outscored 21-7 in two losses to LSU last weekend.

Mississippi State (25-5, 5-4) will go on the road Friday night to play Tennessee in the opener of a three-game weekend series in Knoxville.

“We’ve been a little behind (early in games) and chasing people, so it was nice to be able to play (with a lead),” Mississippi State coach Chad Lemonis said after the win over Louisiana-Monroe. “We had a chance to play with a lead and were able to put another big inning behind it. It lets you relax a little bit.”

Dustin Skelton and Tanner Allen hit back-to-back home runs in the first inning against Louisiana-Monroe. Skelton’s was a grand slam, and the two big shots staked the Bulldogs to a 7-0 lead. They scored another 10 runs in the fourth inning and four in the sixth.

Jake Mangum finished 5-for-6 — the fourth five-hit night of his career — with a triple, three RBIs and three runs scored.

Mangum moved up another spot on the SEC’s all-time hits list. He now has 333 and passed LSU’s Blake Dean on the conference’s career chart.

Mangum (.417) and Jordan Westburg (.385) rank second and third, respectively, in the SEC in batting average this season.

Mississippi State ranks fourth in the SEC with 33 home runs — South Carolina is first with 50 — but is either first or second in nearly every other major offensive category.

Tennessee (22-6, 3-6) has lost two of its three SEC series, including two of three last weekend at Vanderbilt. It is in fifth place in the East Division, four games behind Georgia.

The Vols haven’t scored at the same rate as Mississippi State, but have done it in some key spots. They’ve scored in the first inning in each of the last six games.

“That’s what you want to do in any sport is score first and get that extra boost on a team. Especially when we’re at home, just to show we’re ready to go,” Tennessee right fielder Justin Ammons said after the Vols beat Belmont 6-2 on Tuesday.

• All games streamed on ESPN Plus

Ole Miss’ Davis to be among top 25 in coaching salary

By Nathanel Gabler The Oxford Eagle OXFORD — Ole Miss announced two weeks ago that it was agreeing to a... read more