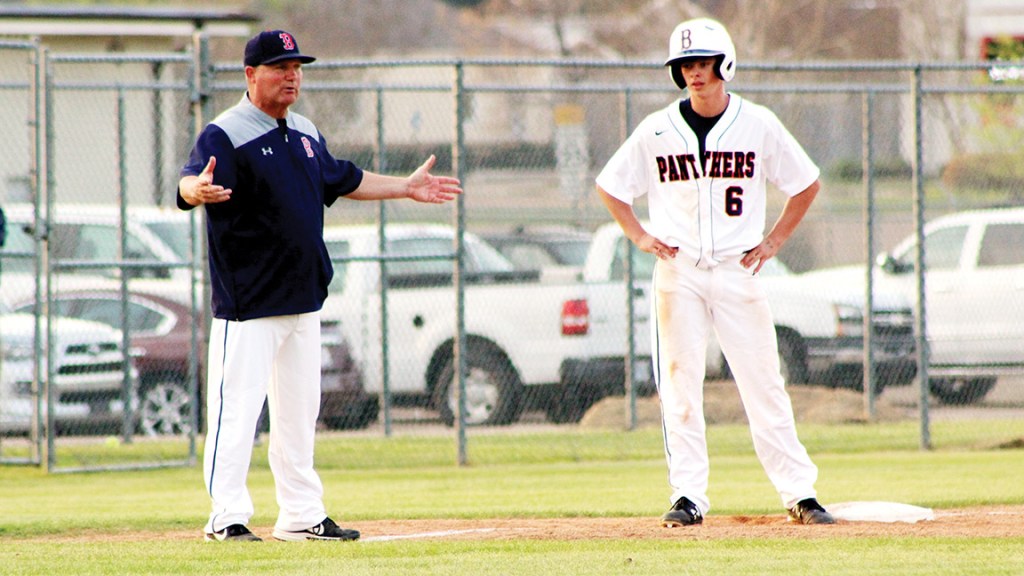 Photo by Cliff Furr Brookhaven High head coach Matt White gives instructions to runner Will Mayfield earlier this season. White and his Panthers have wrapped up their region title and conclude division play Friday at Natchez.

The Brookhaven High Panthers (12-9-1) couldn’t manufacture runs Monday as the 6A Madison Central Jaguars (14-6) cruised to a 11-1 win on Moyer Field.

MC scored two runs in the first, two in the second, one in the third and six in the fifth to take control of the game. The Jags only needed four hits and were aided by two BHS errors, nine walks and two hit batters.

Junior Justin Storm only allowed two BHS hits as the Panthers got a double from Sevante Quinn and a single by Darius Robinson. Lane Smith would score the lone BHS run in the bottom of the second after an MC error.

Junior left-hander Byrion Robinson was charged with the loss for BHS after giving up four earned runs on three hits. Robinson struck out four and walked six on 94 pitches over four innings. Freshman Maney Miller pitched the fifth and gave up two earned runs on one hit while walking three.

The Panthers and coach Matt White have a perfect 8-0 region record after winning three games in blowout fashion last week over Forest Hill. The Panthers will play Natchez on the road Friday to conclude their division schedule. BHS beat Natchez 19-7 and 8-3 previously this season. Wingfield forfeited their three region games this year after not fielding a team.

With first place in Region 6-5A secured, BHS closes out their regular season schedule with a home game Saturday against Pearl River Central and another home game Monday against Lawrence County.

The Panthers will receive a first-round bye in the playoffs that begin April 19. In the second round they’ll face the winner of South Jones versus either Hattiesburg or North Pike. North Pike and Hattiesburg play this week to sort out who will finish third in their region.