BC drubs Amite Co. in doubleheader 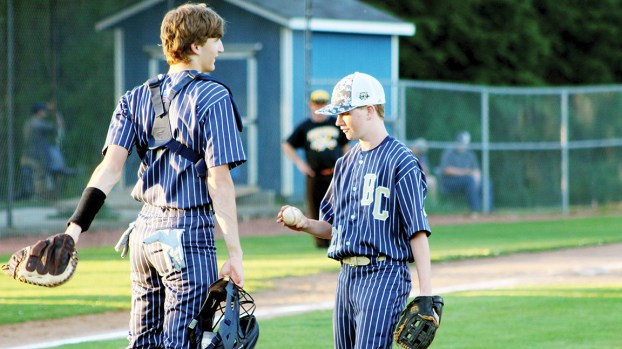 Photo by Cliff Furr Bogue Chitto catcher Tristan Buffington talks with pitcher Brantley Bullock in game two against Amite County. Bullock did not give up a hit in 2.2 innings of relief work. 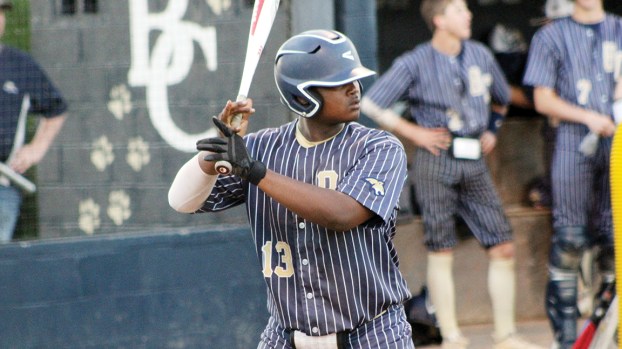 Photo by Cliff Furr Senior first baseman Darius Porter digs in at the plate for the Bogue Chitto Bobcats. Porter went 3-for-3 with two RBIs in a 12-0 game two win over Amite County.

The Bogue Chitto Bobcats (9-9) finished up Region 7-2A play Tuesday with a sweep of the Amite County Trojans. The Cats won game one 13-0 and game two 12-0 on their home field. The Bobcats close out the regular season portion of their schedule Monday when they host Salem at 6:30 p.m.

As they have all year, the Bobcats used strong pitching from senior Bryce Langley and junior Ethan Gladden to keep the Trojan bats in check.

In game one Langley struck out 10 and walked two while giving up one hit on 64 pitches over four innings. Langley has struck out 49 in 30.2 innings of work this season.

Game two saw Gladden strike out four in 1.1 innings of work. Head coach Gareth Sartin pulled Gladden in order to him available for a Wednesday game against Franklin County. Sophomore Brantley Bullock came in as relief and held AC to zero hits while striking out two in the final 2.2 innings.

Last season the Bobcats finished third in the division and took Mize to three games before losing in the opening round matchup of the 2A playoffs. The Cats will most likely go into the playoffs again this year as the three seed. Their probable first round opponent will be St. Patrick Catholic High (9-8) in a series beginning April 19.

Sartin and his crew won’t be intimidated by the higher seeded Fighting Irish from Biloxi — Region 7-2A is a stout baseball division. Pitching has kept BC in some close games during their region schedule — they lost 6-0 to Loyd Star and 5-0 to Enterprise. Sartin says he’s seen his young team grow over the course of the season.

“We’ve got so many young guys and first year starters and they’ve become much more confident at the plate as the season has gone on,” said Sartin. “We’ve got guys that can put the ball in play and put pressure on the defense.”

Tuesday, Langley finished with a combined three doubles and two RBIs in the two games. Gladden hit a home run in game one — but other than that BC piled up single after single on the AC pitching.

Langley, Porter and Cameron Gladden make up the senior class for Sartin and assistant coach Adam Moak. Porter swung the bat especially well on Tuesday as every one of his hits sounded solid coming off the bat. At first base he made an acrobatic split and scoop to get the second to last out of the game. The move drew “oohs” and “ahhs” from the Amite County dugout.

“Darius does a great job as a defensive first baseman,” said Sartin. “He goes down and digs ball out of the dirt and saves us a lot of outs.”

First pitch between BC and Salem Monday is set for 6:30 p.m.