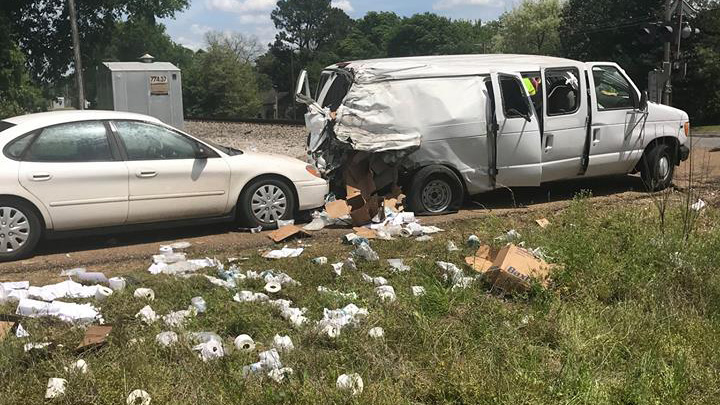 Photo submitted No injuries were reported in a train vs. vehicle crash in Wesson Thursday.

The driver of a van attempted to beat a train as the crossing arms descended and was struck Thursday in Wesson. The driver was not injured but the white Ford utility van was not as lucky.

Wesson Assistant Police Chief Garrett Starkey responded to the crash at the intersection of Collier Street and East Railroad Street.

“The guard arms descended and he tried to make it through, not knowing it was an Amtrak train coming,” he said.

The front of the southbound train collided with the right rear panel of the van. The van then spun around and its rear bumper caught the front bumper of a white Ford Taurus sitting at the railroad crossing on Collier Street, facing southeast, causing damage to that vehicle. The crossing arm of the railroad guard was also damaged in the crash.

The Amtrak train stopped until an official could provide the necessary information to Starkey, and a representative from Canadian National Railway, which owns the railroad, authorized the train to continue.

The unmarked van was carrying supplies such as toilet paper, rolls of which were scattered across the road and a grassy area nearby.

There were no injuries reported on the train. No names were released, and no charges were filed.