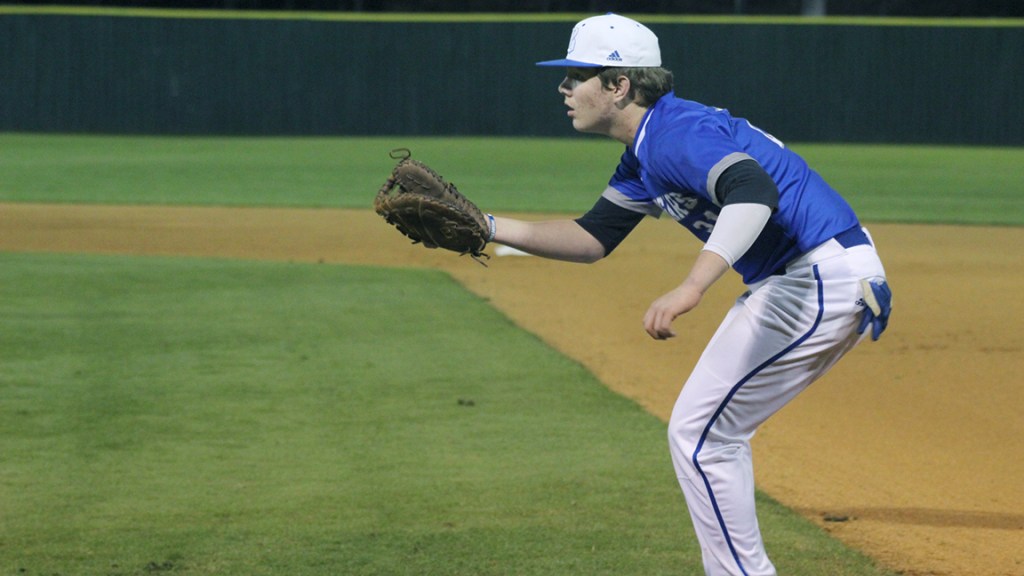 Photo by Katie Furr Caston Thompson and the Brookhaven Academy Cougars finish the regular season with a pair of games next week against Sylva-Bay Monday and Tuesday. The Cougars are 6-0 in division play after squeezing past Clinton Christian 10-9 Thursday.

The Cougars (11-9) kept their district record perfect Thursday by edging out Clinton Christian Academy 10-9 on the road.

In a game tied 9-9, Collin Waldrop got the BA half of the seventh started by reaching on a CCA error. A Cade Brown sacrifice would move Waldrop to second and he’d gain third on an error. The go-ahead run would then come on a Dawson Flowers sac-fly that plated Waldrop.

Flowers and Nick Ogden each homered for coach Tyler Parvin and Flowers, Brown and Brady Spring all hit doubles. In the same week he shut CCA down with a perfect game Flowers finished the night going 4-for-4 with 5 RBIs. Caston Thompson and Keegan Smith also hit safely for the Cougars.

Ogden picked up the win on the mound in relief. He struck out eight in three innings and gave up no hits and no runs on 52 pitches.

BA will finish the regular season next week with a game Monday at Sylva-Bay and then a return game Tuesday hosted by the Cougars.

The Hornets (12-9) wrapped up the Region 7-2A title Thursday with a 14-0 win over the West Lincoln Bears. Loyd Star claimed the region championship in football, boys’ basketball and baseball. One constant on all three of those teams was senior Dane Smith.

On Thursday Smith left no doubt as he gave up five hits, walked one and struck out 12 Bears to get the complete game victory. Reese DeHart had a pair of hits including a double for coach Jared Britt and his staff.

Senior outfielder James Beard hit a home run for the Hornets. Dylan Case, Rials Hester and Brent Cade all hit safely for the Hornets who drew 12 walks as a team.

Grant Jackson and Taylor Allen had two hits each for the Bears and Gavin Burris hit safely as well.

The Cobras (14-8) took command early and never looked back in a 15-3 region win over Tylertown.

Slay Acy had a game-high five RBIs for coach Seth Lofton and his team. Acy homered as did Kenner Bizot. Colton Newman, Will McInnis and Derek Freeman had a double apiece for Wesson. Cade Lowery also hit safely for the Cobras.

Bizot struck out seven and allowed three unearned runs on four hits in four innings. The Cobras are locked in to the fourth spot in Region 8-3A with a 6-4 divisional record. West Marion won the region with an 8-2 mark and Columbia and Seminary tied for second with identical 7-3 records.