It’s a ‘Run’ to remember 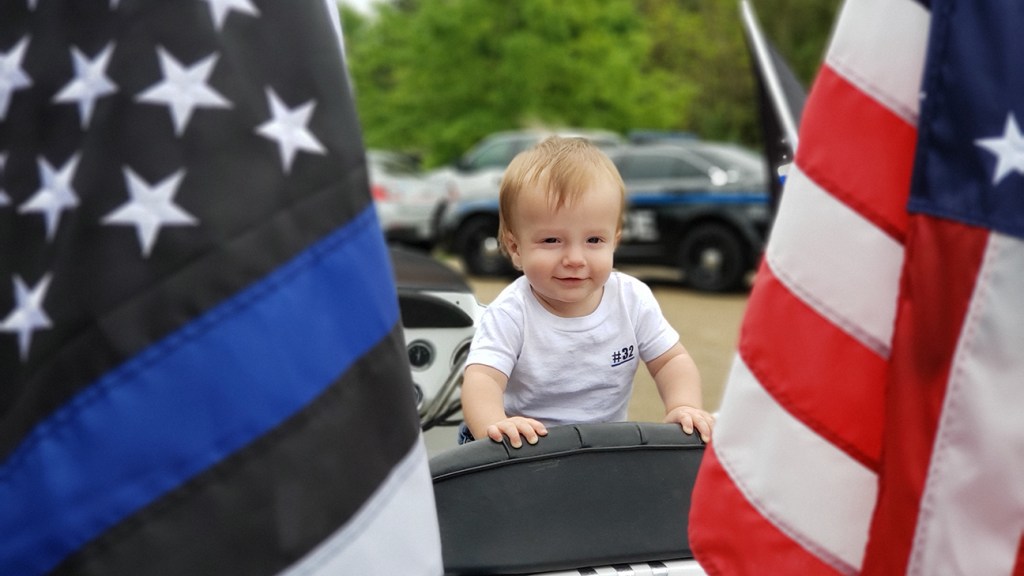 Photo by Donna Campbell Jaxon Reeves stands on his grandfather Steve Reeves’ motor-trike Friday during a barbecue lunch at the Brookhaven Police Department for the families of Cpl. Zach Moak and Officer James White, law enforcement personnel and city and county personnel. Jaxon’s father Bryan rode Moak’s motorcycle to the event, as well. Both cycles had flags mounted to them to honor the fallen officers.

More than 1,800 miles separate Brookhaven from San Bernadino, California, but neither the distance nor 24 hours-plus it takes to drive it could keep 14 law enforcement officers from presenting plaques honoring fallen Brookhaven Police officers James White and Cpl. Zach Moak to their families.

Part of the Cannonball Memorial Run honoring the families of fallen officers across the nation, the group was expected to make a late-night visit to Brookhaven Friday.

Earlier in the day, a barbecue lunch was prepared at Brookhaven Police Department by Mark Porter and the crew of 2nd Hand Smoke, who cooked all night Thursday to have the pork ready in time. Officers from BPD, Lincoln County Sheriff’s Office and Mississippi Highway Patrol enjoyed the pork, burgers, chicken and hot dogs — along with all the trimmings — with members of their LEO brothers’ families. Representatives from the city and county governments, as well as municipal and county workers joined in the time of fellowship.

The officers from California were expected to arrive between 10:30 p.m. and 11:30 p.m. Friday night, having driven nearly non-stop since leaving their headquarters. After a stop at BPD to present plaques, and sample some Mississippi barbecue, they’ll head out again toward Alabama, to deliver a plaque to White’s mother,  Laurie Maxwell White, who was too sick to leave her home and attend the ceremony.

Motorcycle enthusiast Steve Reeves and his son Bryan rode to the lunch with flags on their bikes honoring the country and the men and women in uniform. Bryan Reeves rode the black Honda Shadow that was owned by Moak.

All of the continued attitudes and actions in honor of their sons is a humbling experience still for the fathers of the two officers killed in the line of duty in September. White’s father, Darrell, was all smiles in appreciation.

“Driving that far, non-stop almost … coming from California all the way out here to present us a plaque — I don’t know what to say. It’s an honor. It’s an honor,” he said.

Police Chief Kenneth Collins said the time spent together eating and talking was to emphasize the family and the community.

“We’re all in the same family. It’s the first responder family,” he said. “The community, we’re all together. That’s what it’s going to take to keep you safe.”

Collins said the West Coast deputies called him and said the baker’s dozen-plus-one were loading up in four SUVs and driving straight across through Texas to reach the Homeseekers Paradise. Every stop they planned to make was going to be brief and with purpose — honoring the fallen. The goal of the runs is to remember those who sacrificed themselves for the sake of others, and to help keep their memories alive.

The lawmen only had one request of the BPD chief.

“They said, ‘We want to try some of that Mississippi barbecue.’” said Collins. “I said, ‘We got you.’”