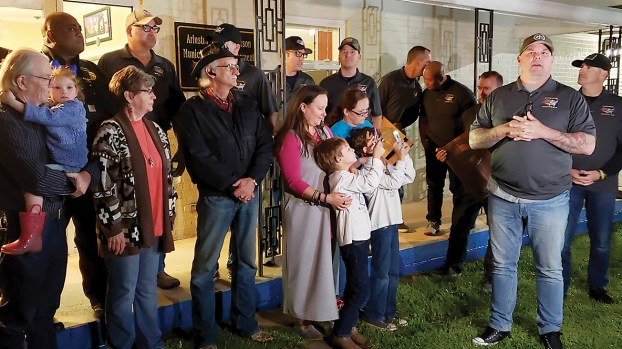 Photo by Donna Campbell Family members of fallen Brookhaven Police Department officers James White and Cpl. Zach Moak were honored Friday night by a team of law enforcement officers from southern California traveling across the country as part of the Cannonball Memorial Run. Pictured: Family members and BPD Chief Kenneth Collins listen as Run members share about the team’s purpose and prepare to present plaques to the families. 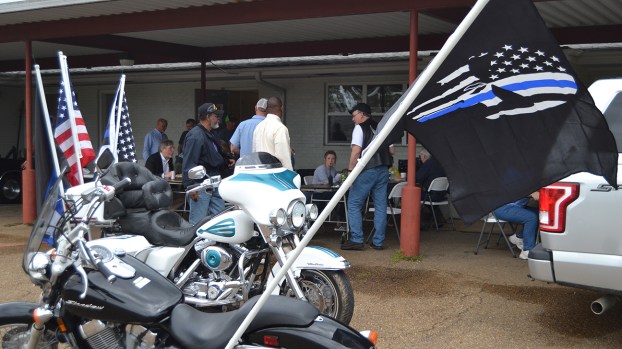 Photo by Donna Campbell Family members of fallen Brookhaven Police Department officers James White and Cpl. Zach Moak were honored Friday night by a team of law enforcement officers from southern California traveling across the country as part of the Cannonball Memorial Run. Officers and local officials share a barbecue lunch with family members at the police station earlier in the day.

Two fallen Brookhaven police officers are part of a group of 14 who are being recognized across the country by the Cannonball Memorial Run.

The group of 13 retired and current law enforcement officers is traveling from California to Washington D.C. to bring awareness to those targeted for wearing a badge. They are driving straight through, taking turns behind the wheels of three SUVs.

Brookhaven Police Chief Kenneth Collins met the caravan as they exited I-55 around 11 p.m. and escorted them — his blue lights flashing and sirens wailing — to the police station.

The group is driving from state to state, presenting plaques and collecting patches they plan to give to the U.S. Attorney General in the nation’s capital. Co-founder Sgt. Jason Hendrix with the San Bernardino County Sheriff’s Office said each stop carries special meaning because 23 years ago, he was shot in the line of duty, too.

The members of the Cannonball Memorial Run presented a plaque to each of the families and a matching plaque for each officer to Collins and Assistant Chief Chris Case for the Brookhaven police station.

The plaques, handmade by one of the Cannonball Run members, are individualized with each officer’s name and includes the message: “It’s how he lived and worked that makes him a hero. God Speed.”

Collins said Moak and White, who were shot to death in the line of duty answering a call, exemplified what he believes a hero to be.

“In memory of these officers we will never give up, we will never stop. We will keep up the fight until God calls us home. If we fall, somebody will get up and take our place,” he said.

The Cannonball Memorial Run was created in December 2016. Organizers said it was inspired in part by the Dallas police ambush that took the lives of four DPD officers and a DART officer that July.

Before arriving in Brookhaven, the caravan also made a stop by the Dallas police station to pick up a patch for a 27-year-old officer who was shot and killed while trying to arrest a shoplifting suspect at Home Depot a year ago this month.

After leaving Brookhaven, the group planned to make a detour to Houston County in Alabama to the home of Laurie White, who could not make the drive to Brookhaven to receive one of her son’s plaques.

Video of the Brookhaven and Houston County stops can be watched on the group’s Facebook page.