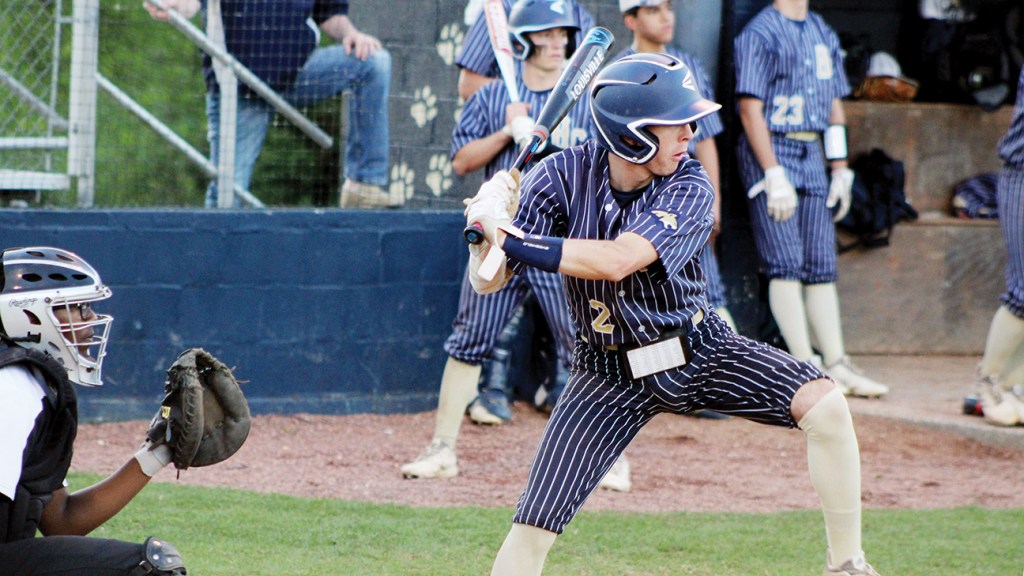 Photo by Cliff Furr Senior Bryce Langley hit a pair of doubles Monday in a 14-2 Bouge Chitto win over Salem. Langley also struck out nine to pick up the pitching win. BC begins the playoffs Friday at St. Patrick.

Bryce Langley pitched the win for BC by striking out nine in four innings. The senior gave up two earned runs on two hits on 78 pitches. Langley also hit a pair of doubles to lead the BC offense. Owen Anderson also doubled, and Carson Price hit a team-high two RBIs. Brandon Welch, Colton Bales and Eli Cupit all also hit safely for coach Gareth Sartin.

The Bobcats now turn their attention to a first-round playoff match up with St. Patrick Catholic. The Bobcats will travel to St. Pat Friday for a 2 p.m. first pitch. The Fighting Irish come to BC Saturday for a 1 p.m. start in game two.

The Yellow Jackets (11-5-1) had little trouble with the McComb Tigers Monday as they won going away 13-0. Both Landon Gartman and Austin Fugler saw action on the mound as the pair used the outing as a tune-up before the playoffs begin Friday.

The senior Gartman struck out five and walked one without giving up a hit in two innings. Fugler pitched the final two innings and struck out two while giving up a pair of hits. Senior slugger Hunter Richardson hit his 10th home run of the season to lead the EAC offense. Richardson drove in four RBIs by going 2-of-3 at the plate.

John Burns and Dylan Carter had a double each for coach Cass Brister. Wyatt Burns also hit safely for the Jackets.

“To have not played in a week due to rain, I thought our at-bats looked pretty good,” said Brister. “It was a team win tonight.”

The Jackets face Richton in the opening round of the playoffs. Enterprise hosts game one Friday beginning at 7 p.m.

The Bears (5-9) wrapped up the regular season Monday with a 10-0 win over South Pike. Brady Ratcliff got the complete game win by striking out six and giving up just two hits.

West Lincoln will match up with Perry Central in the opening round of the 2A playoffs. The Bears host Perry Central at 2 p.m. Saturday.

The Cougars (10-9-1) saw their season end Monday after a 3-0 loss to Sumrall. Southern Miss signee Billy Garrity struck out 10 for Sumrall and didn’t allow a hit on 94 pitches. Senior John Clyde Ready pitched admirably for the Cougars as he struck out five and gave up three earned runs on 122 pitches for LC.