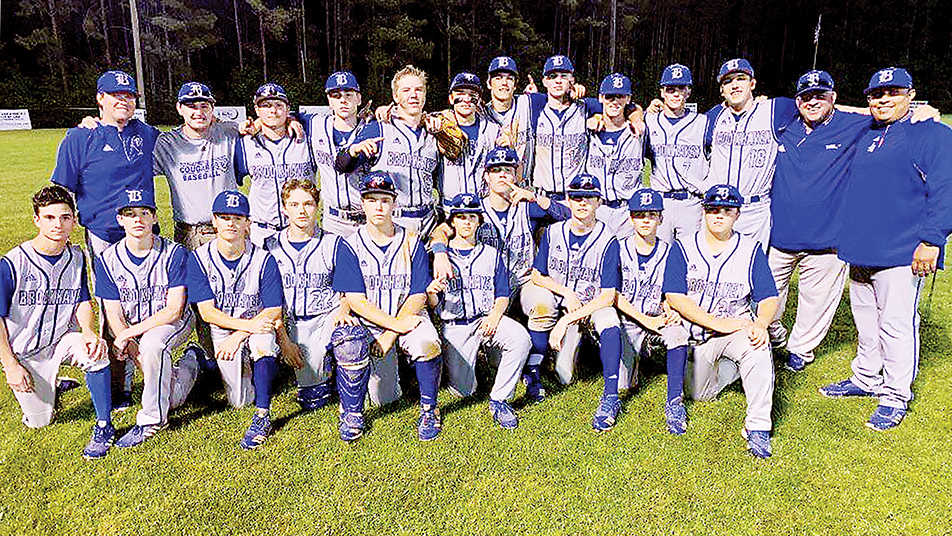 Photo submitted The Brookhaven Academy Cougars celebrate after winning their district title Monday by beating Sylva-Bay Academy 4-2. BA began the MAIS AA playoffs Tuesday. BA is coached by Tyler Parvin and he is assisted by Jose Acosta and Randy Spring.

The Brookhaven Academy Cougars (12-9) clinched the MAIS AA-District 3 championship for a second straight year with a 4-2 road win over Sylva-Bay Academy Monday night.

The Cougars rode the pitching of senior Dawson Flowers to the win as the Mississippi Gulf Coast CC signee struck out 11 and walked two over seven innings. Flowers gave up three hits and two unearned runs in the win.

“Dawson had his breaking ball and his changeup to lefties working tonight,” said BA head coach Tyler Parvin. “He pitched a great game to set the tone.”

The Cougars put together 10 hits and got doubles from Flowers, Cade Brown and Tanner Watts, but only had three RBIs as a team.

“We had trouble at times stringing hits together,” said Parvin. “Sylva-Bay is a solid team and has improved.”

Collin Waldrop had two hits for BA as did Brown and Flowers. Brady Spring, Judson Griffin and Keegan Smith all also hit safely for the Cougars.

Brown led the game off with a single and then scored later in the first when Sylva-Bay misplayed a ball hit by Caston Thompson. In the top of the third Spring started the inning with a walk and scored on a Nick Ogden groundout.

BA got their final two runs in the top of the sixth when Waldrop reached to start the inning on an error and then scored on a Brown double. Brown would then score on a double by Flowers.

The Cougars will match up up with the second-place team out of District 5 in a playoff series next week as they seek to defend their AA state title from last season.