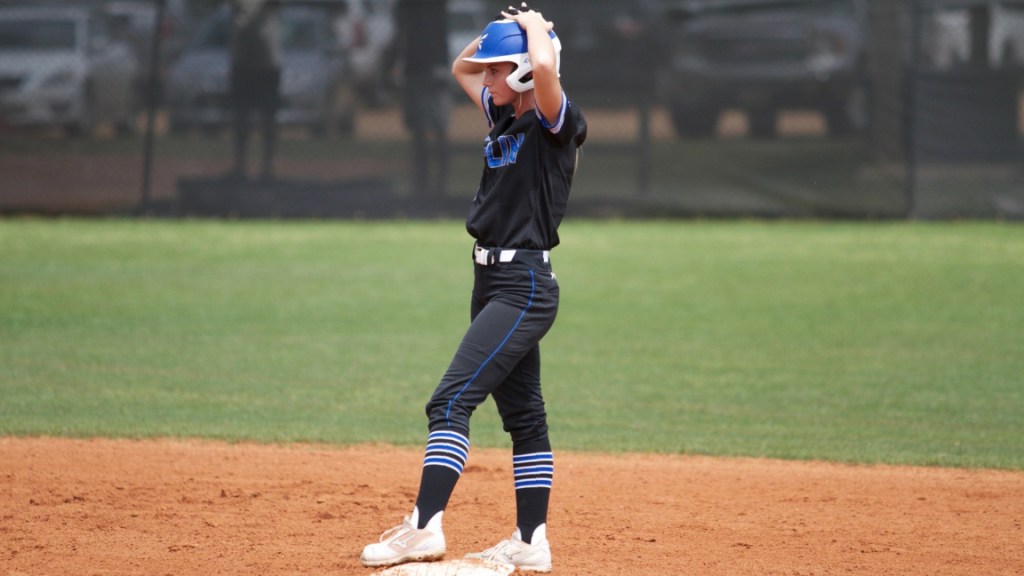 Photo by Co-Lin Sports Information Freshman Carly Polk (Enterprise) and the Copiah-Lincoln Lady Wolves will be at home Wednesday against Mississippi Delta. The game had originally been scheduled for Thursday, but was moved up due to a weather threat.

The No. 10 Copiah-Lincoln Community College Lady Wolves lost a pair of MACJC games to a tough East Central Monday night, 7-4 and 4-1.

East Central grabbed an early lead in the opener as the Lady Warriors poured in four runs in the top of the first inning. The runs came from an RBI double, a sacrifice fly and an RBI single.

The next four and a half frames were scoreless before ECCC stretched the lead to 6-0.

Co-Lin finally scratched back in the bottom of the sixth with an RBI double from Katelyn Hayman that plated Callie Fortenberry. Marley Poole followed with an RBI single to score Hayman cutting the Lady Warriors lead to 6-2.

The Lady Warriors got one in on an RBI single in the top of the seventh to stretch the lead to 7-2.

The Lady Wolves scored two in their final at-bat with an RBI groundout from Delaine McMillan and another RBI from Hayman, this time off a single. Unfortunately, the pair of runs would be Co-Lin’s last as ECCC held on to win 7-4.

Kaytlon Ward took the loss for the Lady Wolves as she got the start. She allowed eight hits and seven runs over seven innings, striking out six.

Hayman led the way at the dish for Co-Lin with three hits in four plate appearances.

East Central got on the board early again in the nightcap as an error allowed one to score in the top of the first.

The contest turned into a pitching duel for the next five innings until the Lady Warriors scored three in the top of the fifth to end the scoring drought. The runs came from an RBI single and an error in the outfield that plated two. ECCC led 4-0 going into the bottom of the fifth.

Co-Lin got runners aboard in the bottom of the sixth but was unable to push any of the Lady Wolves across. Going into the final inning, Co-Lin trailed 4-0.

An error scored one for the Lady Wolves in the bottom of the seventh as Ky’Albri Washington ripped a line drive to short. The error plated McMillan, but that was the Lady Wolves’ only run.

Makenzie Smith took the loss for Co-Lin in the circle as she got the start. She went five innings, allowing four runs on eight hits, striking out three and walking zero.

Mackenzie Gros threw two innings in relief allowing no runs on one hit, striking out one, and walking zero.