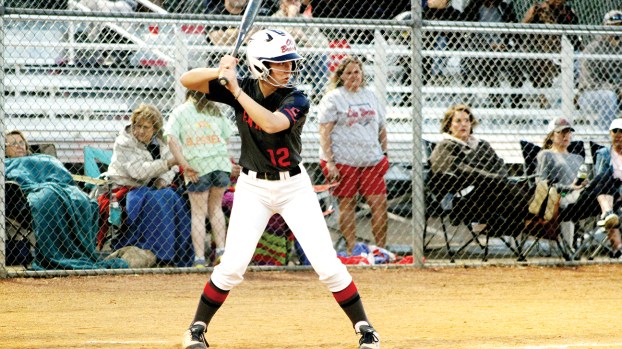 Photo by Cliff Furr Brookhaven High senior Kat Wallace went 2-for-3 with a double and an RBI in a 12-5 win over South Jones on Senior Night Monday. As region champs BHS will have a bye in the opening round of the playoffs that begin this week.

Here is a roundup of high school softball action from Monday in the area.

The Brookhaven High Lady Panthers (11-12-1) sent their sole senior Kat Wallace out in style as they crushed South Jones 12-5 on Senior Night.

Brookhaven went up 1-0 in the first when Madi Miller scored on a Linsey Nations double. Miller would score again in the next inning when Wallace doubled. Wallace scored after a Meg Foster pop-up was played for an error. The teams combined for 14 errors in the game.

South Jones cut the lead to 3-2 after 2.5 innings, but Brookhaven responded with six runs in their half of the frame.

Nations pitched the win after striking out one and giving up seven hits and zero earned runs on 81 pitches. Miller hit a triple and Nations drove in two runs. Layla Woodall also hit safely for coach Mandy Vinson and her staff.

As the Region 5-5A champs the Lady Panthers are off in the first round of the playoffs. They’ll play the winner of the Play-In-Round between West Jones and Picayune.

Wesson scored three runs in the first inning and four in the third to put together an insurmountable lead over West Lincoln Monday as the Lady Cobras (18-2) took a 7-3 win in Copiah County.

Laynee Crapps pitched the win for coach Michelle Nunnery and Wesson. Kayla McElveen hit a double for Wesson as one of her three hits on the night. Anna Claire Crow also had three hits for the Lady Cobras. Shelbi Maxwell and Melody Ashley also hit safely for WAC.

WL got a double from Adi Paden as one of her two hits. Camryn Summerall also had two hits for coach Andrew Redd. Madison McNatt. Morgan Newman, Bailee Goodson, Micah Powell and Bailey Wilson all also hit safely for WL.

Wesson has an opening round bye in the 3A playoffs that begins Friday. West Lincoln will match up up with Taylorsville in the opening round of the 2A state tournament.

Bogue Chitto (13-7-1) completed a season sweep of Columbia High on Monday by edging past the Lady Wildcats 8-5 on the road. BC outhit Columbia 11-6.

Kayci Beth Wallace started BC off with a walk and scored later in the inning on a Codi Leggett ground-out. Columbia used a solo homer in their half of the first to tie the game 1-1. BC took control in the second with four runs beginning with a Karly Leake RBI single. Leggett would then hit an RBI single that would be followed by a Baileigh Jackson RBI single that put coach Kris Smith and his Lady Cats up 5-1.

BC also got a one-run home run from Kylie Chapman in the win. Wallace, Leake, Leggett and Julie Anna Bartram all had two hits apiece for the Lady Cats. Leggett and Jackson drove in two RBIs apiece to lead the BC offense.

Panthers perfect in region with 12-0 victory

The Brookhaven High Panthers (14-9-1) finished Region 6-5A play Monday with an unblemished record after beating Natchez High 12-0 on... read more