Another round of severe weather expected Thursday 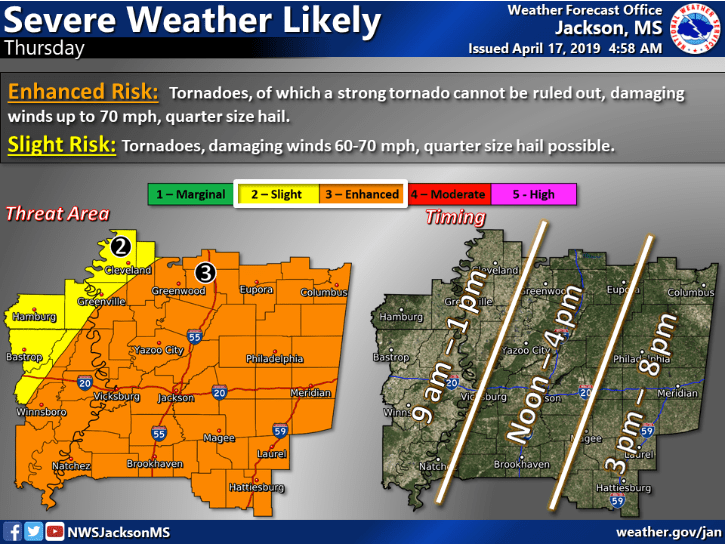 Mississippi is in the crosshairs again as severe weather is likely Thursday, according to the National Weather Service.

Tornadoes, damaging wind gusts and hail will be possible. The storm is expected to impact the area from noon to 4 p.m. Winds up to 70 mph are possible, as is quarter-size hail.

Southwest Mississippi is also under a limited threat of flash flooding Thursday. Rainfall totals of 1-3 inches are possible, with localized flash flooding expected in some areas.

Thursday’s storms follow a round of severe weather Saturday that produced 19 tornadoes in Mississippi.

Officials continued to clean up Tuesday in the hardest-hit areas around Hamilton and Vicksburg.

By late Tuesday, Entergy Corp. cut electrical outages in Warren County to 140, down from thousands earlier.
Officials now count more than 350 buildings damaged statewide, in addition to one death and 18 injuries. Mississippi State University had $350,000 in damages after a hay barn was destroyed and other parts of its Starkville cattle farm damaged.

Shelters are open in Hamilton and Vicksburg, as well as a volunteer reception center in Hamilton. The Highway Patrol is helping Monroe County officials with traffic control and security.