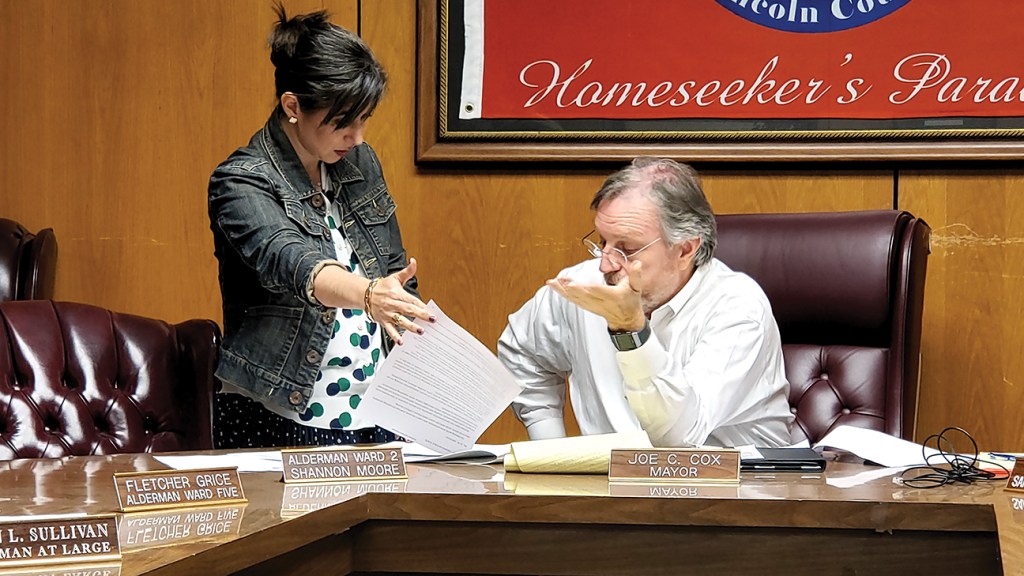 In 30 days, it will be illegal in Brookhaven to smoke in a tobacco shop or vape in a vaping shop. It will also be against the law to smoke in any hotel or motel room, private club or park within the city limits.

The Brookhaven Board of Aldermen voted unanimously Monday to approve a comprehensive ordinance covering workplaces and public places in the city and to vacate the previous ordinance. Ward 2 Alderman Shannon Moore, Ward 3 Alderwoman Mary Wilson and Ward 5 Alderman Fletcher Grice did not attend the special-called meeting which was scheduled at the board’s April 16 meeting.

A copy of the ordinance will be made available at Brookhaven City Hall in the Brookhaven-Lincoln County Government Complex.

Several big changes to the previous ordinance includes no smoking in hotel and motel rooms and puts a limit on how close smoking is allowed within the entrance to a public building. It also takes away a business’s right to opt out of the ordinance.

The ordinance does not affect those who chew tobacco or dip snuff.

Alderwoman-at-Large Karen Sullivan, who is on the coalition board, pushed for a more restrictive ordinance. Ward 6 Alderwoman Shelley Harrigill was satisfied with the proposed changes to the ordinance, but wanted to eliminate the restriction on public parks. She felt smokers who go to the park alone and aren’t around other people should be allowed to smoke.

For over an hour, aldermen hashed out the 18-page ordinance, adding lines, changing words and striking sentences and then going back to the beginning and doing it over in an effort to limit the public’s exposure to first-hand, second-hand and even third-hand smoke, which the ordinance defines as the product left behind after smoking that builds up on surfaces and furnishings. It can linger long after smoking has ceased and continue to expose people to tobacco toxins, Sullivan said.

Smoking in private clubs is prohibited inside the buildings.

“No, I’m not taking that out. We’ll be here all night,” she said. Aldermen settled on a 20-foot distance for prohibiting smoking in outdoor public places. That means smokers must be at least 20 feet away from the entrances, operable windows and ventilation systems of enclosed areas where smoking is prohibited, so as to prevent tobacco smoke from entering those areas. That includes outdoor seating at restaurants, playgrounds and public events.

The 20-foot buffer includes outdoor seating or serving areas of restaurants and bars, outdoor shopping malls (like strip malls), the bleachers and grandstands for use by spectators at sporting and other public events, parking lots in outdoor recreational areas, outdoor playgrounds and outdoor public events. Smoking is prohibited in all outdoor places of employment where two or more employees are required to be in the course of their employment. Smoking is also prohibited on all outdoor property that is adjacent to buildings owned, leased or operated by the city and is under the control of the city.

According to the ordinance, those who are in control of a place of employment, public place, private club or residential facility where smoking is prohibited must post “No Smoking” signs and remove all ashtrays.

Penalties for violating the ordinance did not change. A person who smokes in a restricted area can be fined up to $50. A person who owns, manages or operates a place of employment who does not comply with the ordinance can be fined up to $100 for the first violation, up to $200 for a second violation within one year and up to $500 for each additional violation within one year. Each day on which a violation occurs is considered a separate violation. Businesses not in compliance can have permits or licenses revoked.

Smoking is not regulated by the city in private residences, unless used as a childcare, adult daycare or healthcare facility.

The new ordinance is modeled after an ordinance provided by Miesha Smith, the project director for Mississippi Tobacco-Free Coalition of Copiah and Lincoln counties. The model ordinance comes from Americans for Nonsmokers’ Rights.