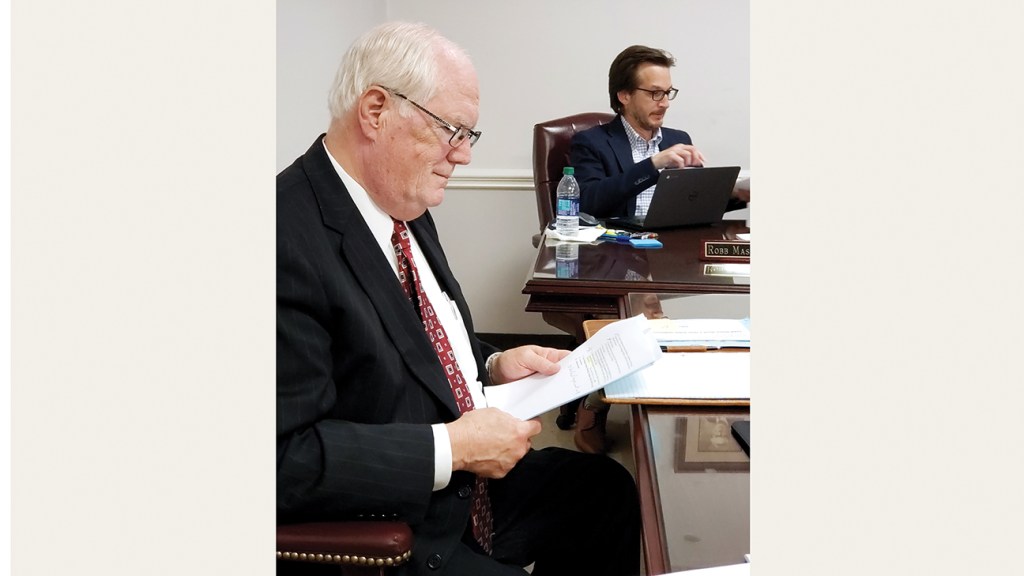 Photo by Donna Campbell Attorney Bob Allen follows along with the agenda at the Brookhaven School District’s monthly meeting of the board of trustees. The board voted unanimously to employ Allen as its legal counsel for the 2019-2020 school year. Pictured are, from left: Allen and board member Robb Massengill.

Three things stood out Tuesday night as the Brookhaven School District’s Board of Trustees discussed keeping its legal counsel in place for another year — loyalty, longevity and a long run to the end zone over 50 years ago.

“We get you for another year,” said board President Lucy Shell.

“Thank you for your service,” said board member Erin Smith. “Sometimes I look to Mr. Allen not just for legal matters, but he’s also our historian. He’s been our historian for 41 years.”

But Allen’s involvement with the Brookhaven School District began even before the board first hired him in 1978.

Allen, 72, graduated from Brookhaven High School before studying law at Ole Miss. After working as a prosecuting attorney in Hinds County and serving as a law clerk for Mississippi Supreme Court Justice Neville Patterson, Allen returned to Brookhaven in 1973 to practice law with his father, Emmette, who was serving as the school board attorney.

“We were sitting next to Moss Point people and that’s the only thing I can remember about it,” he said.

Smith believes Allen bleeds Panther blue and red. He and his wife, the former Patricia Black, are Brookhaven graduates and so is their daughter, Julie Ann Foncea, and their son, William Robert Allen.

The younger Allen practices law with his father at the law firm Allen, Allen, Breeland and Allen in Brookhaven.

Bob and Patricia Allens’ grandchildren are students in Brookhaven schools.

“When that happens, when you see that, you see that you are invested in our community and our schools, an I appreciate that,” Smith told the attorney.