BC gets sweep with road win at Richton 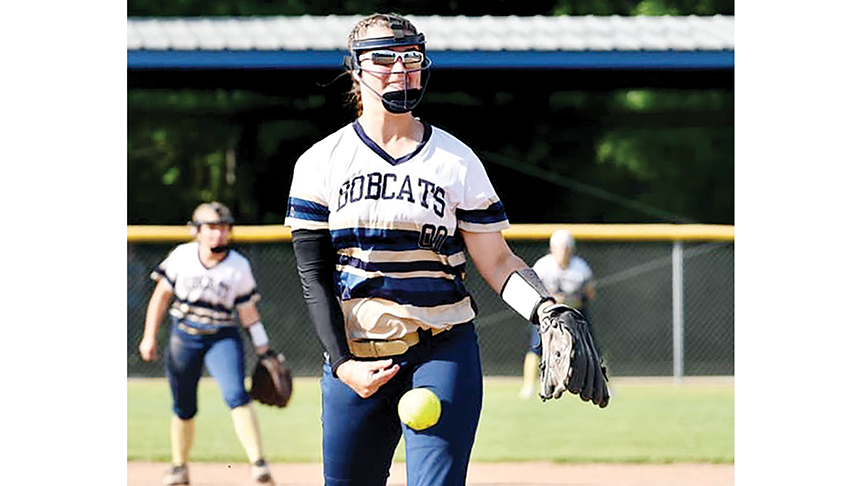 Photo by Stacy Leake Junior pitcher Codi Leggett gave up one hit in three innings of relief Tuesday as Bogue Chitto swept Richton with an 8-5 road victory. The Lady Bobcats next play Taylorsville in a series that begins Friday.

Bogue Chittto (18-8-1) is on to the south state quarterfinals of the MHSAA 2A tournament after beating Richton High 8-5 on the road Tuesday. With a 2-0 series sweep of Richton (11-8) the Lady Bobcats now move on to face Taylorsville (13-11).

BC out-hit Richton 13-6 as they never trailed Tuesday. A Julianna Frazier single in the first inning scored Codi Leggett and quickly put the Lady Cats up 1-0.

Two more runs were added in the second when Kayci Beth Wallace hit an RBI single and an error allowed another Lady Cat to cross the plate on a ball hit by Leggett that put BC up 3-0.

Frazier drew the start and picked up the win in the circle by giving up five earned runs on five hits and striking out two in four innings. Leggett pitched the final three innings in relief and allowed one hit.

In the fourth, Leggett drove in another run with an RBI single and Wallace scored on a wild pitch. Richton cut the lead to 6-5 after scoring four runs in the fourth inning.

BC started the top of the fifth off with an Alece Nettles single. With two outs Nettles scored on a Karly Leake single. Leake then scored when Leggett roped a triple to right field as coach Kris Smith and his team grew their lead back out to 8-5.

Leggett went three-up-three down over the final two innings to slam the door on any Lady Rebel comeback attempt.

Bogue Chitto hosts Taylorsville in game one of their series Friday at 6 p.m. Game two starts at 2 p.m. Saturday at Taylorsville. If game three is needed it will immediately follow game two.