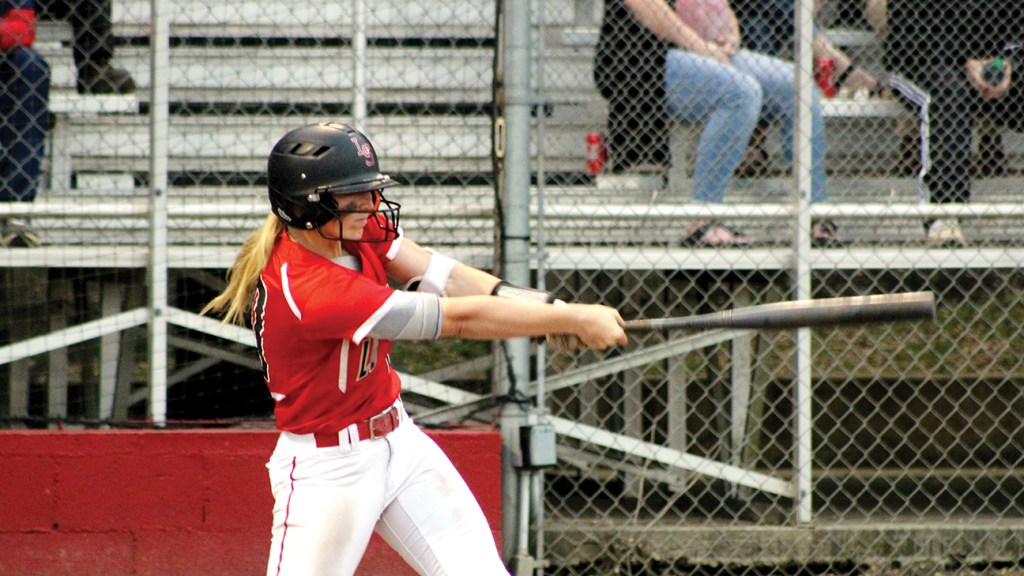 Photo by Cliff Furr  Senior third baseman Johnna Norman of Loyd Star blasts a two-run home run for the Lady Hornets in their 18-8 win over Pisgah Tuesday. Norman and the Lady Hornets host Enterprise-Clarke in a playoff series that begins Friday on Jan Smith Delaughter Field.

The visiting Pisgah High Lady Dragons (15-14) deserve credit for giving the Loyd Star Lady Hornets their best shot Tuesday in their MHSAA 2A playoff matchup. After rallying back twice the Lady Hornets (21-5) exploded for eight runs in the fifth inning to blow open what had been a close game and take an 18-8 win on Jan Smith Delaughter Field to sweep the series 2-0.

Pisgah scored three runs in the top of the first inning to shock the large red-clad home crowd. LS responded to tie the game at 3-3 in the bottom of the second. The Lady Hornets got on the board with an RBI single by eighth grader Carson Hughey. Pisgah then issued back-to-back walks with loaded bases that brought in two more Loyd Star runs.

The Lady Dragons went right back up 6-3 with a three-run third that included a two-run bomb by freshman Camille Russell. In the bottom of the fourth Loyd Star took their first lead. Hughey reached to lead the frame off when Pisgah misplayed her bunt for an error. Malori Cade then moved Hughey to third with a double. Another Pisgah error on a ball hit by Alyssa Leggett scored Hughey and Cade. Pisgah committed eight errors in the game.

PHS walked in a run that tied the game at 6-6 and the Lady Hornets went up 7-6 on an RBI single by Carly Beth Wallace. Again, the Lady Dragons would answer as Pisgah tied the game 7-7 in the top of the fifth.

Loyd Star pitcher Aly Floyd would settle in after Pisgah tied the game. Hughey started in the circle for the Lady Hornets but was replaced by Floyd after two innings. In her four innings of work the senior Floyd gave up one earned run on three hits to pick up the win.

“Aly did a great job of settling us down and forcing outs,” said Delaughter. “The defense began to play well behind her and we made the routine plays.”

Loyd Star has won over 20 games this year by hitting the ball hard. That strategy finally began to bear fruit for them in the fifth. After Meagan Poole was hit by a pitch Norman put the Lady Hornets up for good with a two-run slam that sailed over the left-center fence. Norman is a Copiah-Lincoln signee and Lady Wolves head coach Meleah Howard was in attendance to see Norman blast her sixth home run of the season.

“I think early on we were trying to do too much,” said Delaughter. “We were swinging at pitches that were balls. When Johnna hit one out, that gave us a little breathing room and the rest of the order kept it going.”

The lead continued to build after an RBI single by Wallace and an RBI single by Aubrey Britt. Cade then blew the doors off when she hit a three-RBI triple that put LS up 14-7. Cade later scored on a double by Poole.

Cade hit a pair of doubles and Baylee Zumbro hit a two-bagger as well. Wallace knocked in four RBIs and Cade and Norman pushed across three runs apiece. Poole, Leggett and Floyd had two RBIs each.

Next up is a south state quarterfinal matchup with the Enterprise-Clarke Lady Bulldogs. EC is 22-3 with their only losses to Northeast Jones, Wayne County and Newton County. The Lady Bulldogs are a very experienced team with five seniors on the roster who have already signed JUCO scholarships in Morgan Partridge (East Central), Maycee Knight (Jones College), Sarah Brannan (Gulf Coast), Hannah Herrington (Gulf Coast) and Shawanda Gray (Holmes).

Loyd Star hosts Enterprise Friday at 6 p.m. in game one of their three-game series.