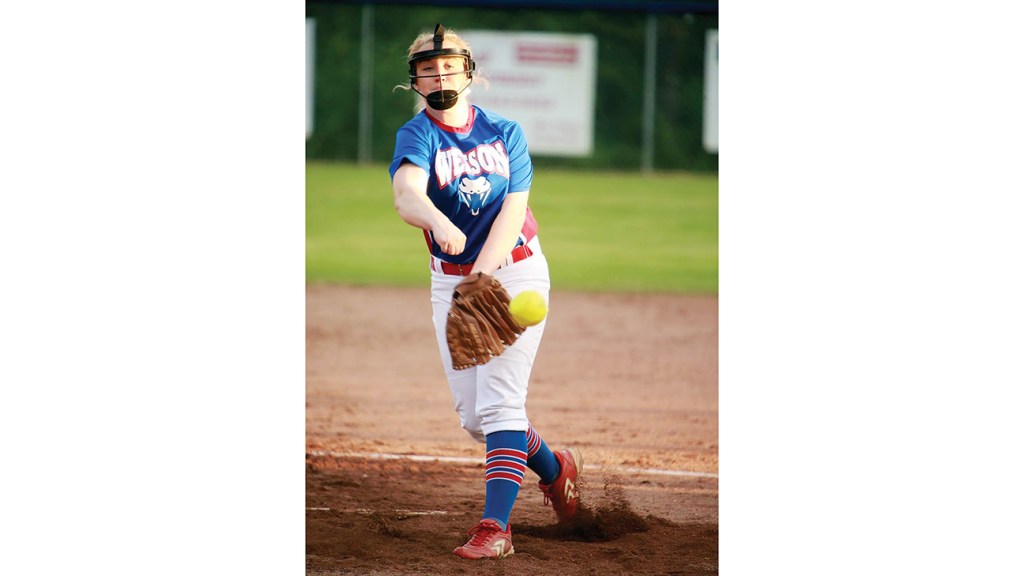 Photo by Ann Clark  Wesson junior pitcher Laynee Crapps picked up a pair of wins for the Lady Cobras Wednesday as they beat Seminary twice to keep their season alive. Wesson next meets Choctaw Central tonight on their home field for a 5 p.m. 3A playoff matchup.

The Wesson Lady Cobras (21-4) needed to win two games Wednesday night to keep their season alive. After dropping game one 6-2 at Seminary Tuesday, coach Michelle Nunnery and her team had their backs against the wall in the best-of-three 3A playoff series.

Wednesday night they showed why they’ve been one of the best teams in the area all season as they squeezed past Seminary 3-1 in the first game and then won the rubber match 7-5 in dramatic fashion.

“The girls stepped up to a do-or-die situation,” said Nunnery. “We couldn’t have asked for a better atmosphere with the awesome fans that we had cheering us on for a long night of softball.”

Game one Wednesday was all about the dominant pitching of sophomore Laynee Crapps. Crapps has been strong in the circle all season and she shut the Seminary offense down by holding them to one earned run on two hits. Crapps threw 79 pitches and struck out two while walking one.

Wesson started the game hot as leadoff batter Shelbi Maxwell reached on a triple. Maxwell then scored on a double by junior catcher Catherine Wilson that put the Lady Cobras up 1-0. Maxwell kept it going in the top of the third when she doubled to start that frame. She’d score from second when Crapps pounded an RBI double that had Wesson ahead 2-0.

Seminary generated some offense in the fourth when they scored their only run on a sac fly with two outs. Wesson gave themselves a little more breathing room and their final run of the game when Natalie Bonds scored on a Maxwell single in the bottom of the fourth. Bonds had started the inning off with a single and moved to second on a Bre Westbrook bunt.

Crapps was lights out over the final three innings as she went three-up-three down in the fifth and sixth. Seminary got a baserunner on in the seventh due to an error, but Crapps forced a groundout to end the game and send the series to a game three situation.

Seminary was able to get things going in the top of the first of game three. They used a couple hits and a couple errors to jump up 2-0 on the Lady Cobras.

Wesson responded in the bottom of the second when Melody Ashley and Westbrook both scored on a Seminary error to make the game 2-2.

Seminary got a leadoff double in the third and moved their runner to third with two outs, but Crapps forced a groundout to end the inning.

The Lady Cobras got three runs in the third when Katie Mcsweyn hit a ball that was handled as a Seminary error and scored Anna Claire Crow. Sophomore Chloee McManus then hit a two RBI double that put Wesson up 5-2.

The visitors from Covington County refused to go away though as they tied the game in the top of the fourth at 5-5.

The score stayed that way until the bottom of the sixth when the snakes made their move and slithered into the lead for the final time. Maxwell drew a walk to start the inning and moved to second on a Crow single. Wilson drew a walk to load the bases. Crapps then hit a sac fly that scores Maxwell. The final Wesson run then came on a Bonds RBI single that scored Crow.

Wesson will next play Choctaw Central (12-15) today at 5 p.m. on their home field. Game two will be at Choctaw Central Saturday, and if needed game three will immediately follow.