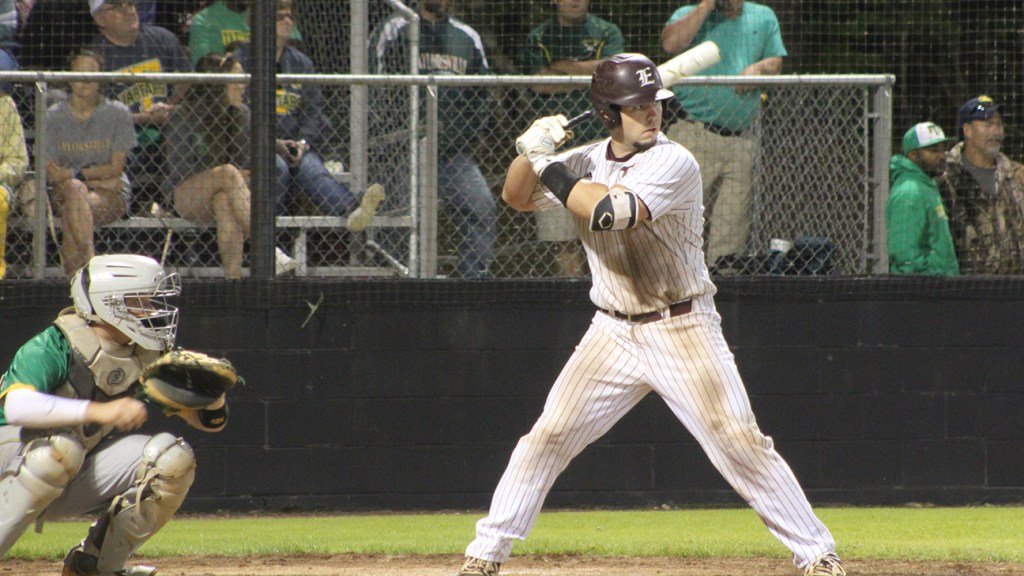 Photo by Cliff Furr Enterprise senior catcher Hunter Richardson digs in at the plate Saturday night against Taylorsville. The Yellow Jackets play at Taylorsville tonight at 7:30 p.m. in the third game of their 2A playoff series.

Enterprise stayed alive Saturday night with a 5-1 home win over Taylorsville in their MHSAA 2A second round series. The Yellow Jackets (14-7-1) play at Taylorsville tonight at 7:30 p.m. in an elimination game.

Friday Taylorsville (21-9) scored at least one run in five of six innings to cruise to a 10-0 win in the series opener.

Starter Austin Fulger went five innings and gave up one earned run and three hits. Fugler struck out nine but walked five and had his defense commit two errors behind him that led to Taylorsville runs. John Burns, Colby Bear, Dylan Carter and Matthew Burns all saw short relief appearances as the Jackets did not want to use up the availability of their future pitching in the series.

The rules governing MHSAA pitch count says that a player can throw between 1-25 pitches and does not need a day of rest to throw in a game again. A maximum of 120 pitches is allowed and then the player must have four days’ rest. A pitcher can start a new batter at the end of their 120 pitches and still finish that batter if it goes over that threshold.

All that math would figure into game two Saturday at Enterprise. EAC ace Landon Gartman was keeping the Taylorsville bats in check. The senior had struck out 10, but THS had loaded the bases with one out in the top of the seventh and had the tying run at the plate.

Gartman began his final batter on pitch 119 and it looked like the Jackets would have to go to the bullpen for one more out. That wasn’t necessary though as second baseman Dustin Prather snagged a hard-hit line drive and then raced to step on second base and end the game with a double play.

The Jackets scored four runs in the fourth inning to take control of the game. John Burns got aboard on a walk and Wyatt Burns reached on an error that moved John to second. With two outs Gartman tripled to score both Burnses. Prather drew a walk and then Hunter Richardson reached on an error that scored two more runs. Taylorsville had back to back errors in the fifth that helped push across an insurance run as Wyatt Burns perfectly executed a bunt with a runner on third to score the final Enterprise run.

“Landon made some big pitches tonight and we made some big plays behind him,” said Enterprise head coach Cass Brister. “A great team effort and a clean game. Proud of my guys and how hard they played, now we’ve got to do it again.”

Expect Colby Beard and John Burns to be the main pitching options for Brister and pitching coach Josh Garrett in game three. Matthew Burns and Trenton Tarver are two more Jackets who have seen time on the mound this season. The Jackets only have two wins this season in games that Fugler and Gartman did not pitch, both over Amite County. Taylorsville used junior Walker Gable and senior Chandler Cline in the first two games. They’ll likely throw senior Kenner Todd in game three. Todd is 4-2 with a 2.58 ERA in 11 appearances.