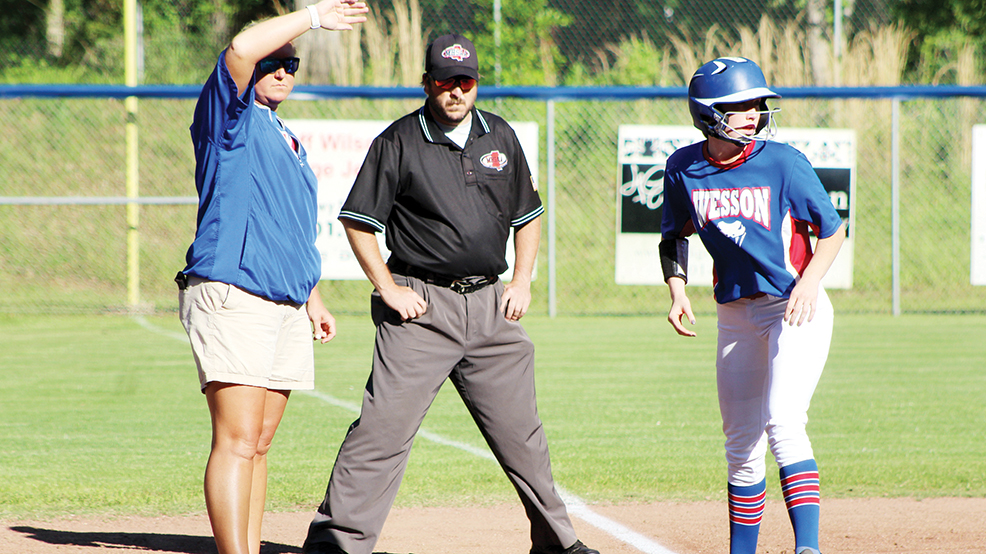 Photo by Cliff Furr Junior first baseman Anna Claire Crow stands on third beside Wesson head coach Michelle Nunnery in the first inning Friday. Crow had earlier hit an RBI double that put Wesson on the board, but the visitor from Neshoba County took game one as Choctaw Central won 13-4.

It’s the third straight season that the Lady Cobras have been knocked from the post season by Choctaw Central. Coach Michelle Nunnery graduates two seniors in Shaylin Green and Melody Ashley.

In game one Friday at Wesson the Lady Warriors out hit the Lady Cobras 18-10. Choctaw Central scored three runs in their half of the first inning and never trailed. Natalie Bonds doubled for the Lady Cobras and junior Catherine Wilson hit a home run. Crow drove in a pair of runs for WAC.

Saturday Choctaw Central held Wesson to three hits in closing the series out. The Lady Cobras committed three errors in the loss. The Lady Warriors do not have a senior on their roster and have won 10 of their last 12 games. Choctaw Central next plays the winner of Raleigh and Columbia.