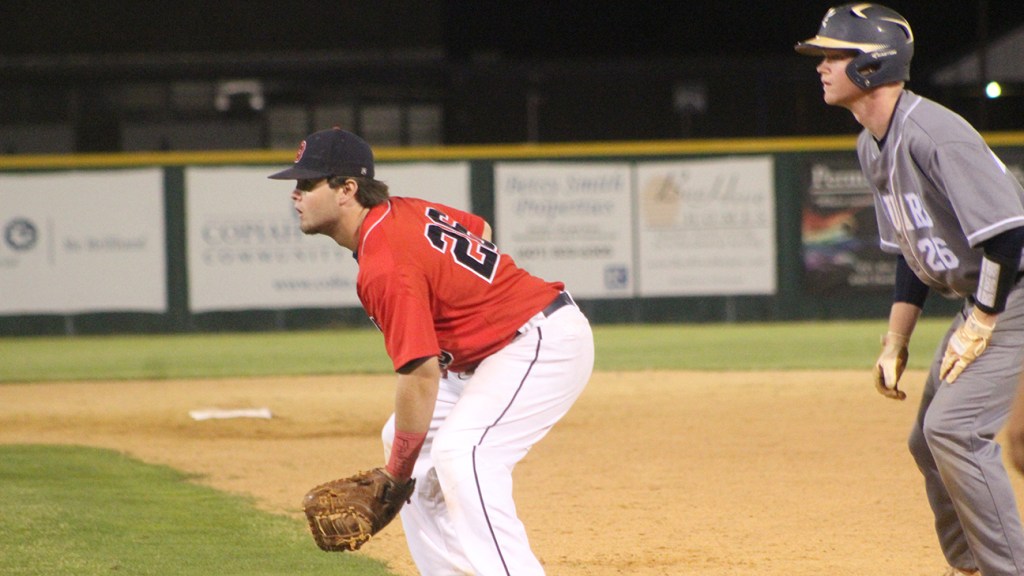 Photo by Cliff Furr Senior first baseman Jacob Porter of Brookhaven High plays defense in front of North Pike base runner Jimbo Harrell Friday night on Moyer Field. The Panthers and Jaguars meet tonight at 7 p.m. in an elimination game in their second round 5A playoff series.

With one out left in their season the Brookhaven High Panthers (15-10) created some playoff magic on Saturday. A Lane Smith triple with two outs in the top of the seventh scored two runs to give BHS the 3-2 win which set up a winner take all-game three tonight at BHS in the 5A second round playoff series.

North Pike (14-9) whipped BHS Friday 11-1 in the series opener. The Panthers committed five errors in the six-inning loss as starter Byrion Robinson gave up one hit and two earned runs in 3.2 innings. Robinson hit two batters and walked nine while striking out five.

Corbin Falvey had two hits and Jacob Porter and Gatson Walker a hit apiece in the game one loss.

The Saturday comeback was made possible by a gutty pitching performance by senior Copiah-Lincoln C.C. signee Sevante Quinn. Quinn threw 99 pitches in the complete game win. He gave up four hits, two earned runs and struck out three while walking four. Quinn got three straight groundouts to end the game and extend the series.

Brookhaven tied the game at 1-1 in the top of the sixth when Quinn hit a double to score a run, but North Pike threw out a runner at home and would then score a run in the bottom half of the sixth to take a 2-1 lead.

The Panther rally began with two away when Robinson drew a walk that moved Falvey to second. Porter then hit a a ground ball that was played for an error by NP. That loaded the bases and set up Smith’s heroic hit.

BHS will likely go with Maney Miller on the hill tonight to start the game. The freshman is third on the team behind Robinson and Quinn with 19.1 innings thrown this season in three starts and nine overall appearances.

Last season BHS bounced back from a 10-3 loss to North Pike in a first-round playoff series to win two straight game and advance over the Jags. First pitch at Moyer Field is set for 7 p.m. tonight.

Senior first baseman Jacob Porter of Brookhaven High plays defense in front of North Pike base runner Jimbo Harrell Friday night on Moyer Field. The Panthers and Jaguars meet tonight at 7 p.m. in an elimination game in their second round 5A playoff series.