Lincoln County residents will have two opportunities to come together Thursday to offer prayers for the area, state and nation on the National Day of Prayer.

King’s Daughters Medical Center will host its fifth annual prayer walk 7-8 a.m. at the entrance to the radiology outpatient department. Hosted by the KDMC prayer committee, the event will feature Brookhaven Police Department Chief Kenneth Collins as its speaker. KDMC chaplain Woody Rimes will offer the opening prayer, and Andi Cotten and Heather McKenzie will lead in worship singing.

“The purpose of the prayer walk is to promote prayer for KDMC, its patients and the healthcare community as a whole, and to acknowledge our dependence on God in everything we do,” said KDMC Chief Information Officer Carl Smith.

Seating is provided for the program, and refreshments will be served. A chauffeured golf cart will be available for those who have difficulty walking.

Following the brief program there will be a time of walking around the perimeter of the hospital praying silently. A booklet will be provided to each participant with suggestions on what to pray for as they pass prayer stations. CEO Alvin Hoover and Rimes will lead the walk.

“If we’re going to fulfill our mission, we must be people of prayer,” Smith said.

In case of rain, the ceremony will be moved inside the hospital lobby. A 20 percent chance of rain is forecast for the day.

At noon, the Lincoln County Baptist Association will host a prayer service on the steps of the Brookhaven-Lincoln County Government Complex. LCBA Director of Missions Rev. Steve Jackson stressed that the program is not focused on one denomination. Anyone who believes in the power of prayer is welcomed, and the program will involve people from various Christian groups.

The theme is “Love one another, John 13:34,” and will include songs, scripture reading and prayers for what Jackson called “the seven centers of influence in America”: the government, military, media, businesses, schools, churches and families. 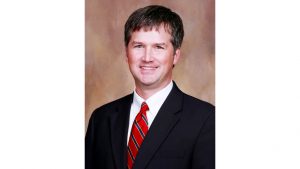