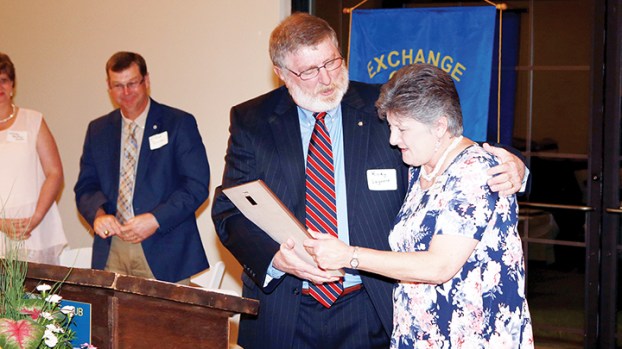 Photo by Johnny Smith Sarah Lloyd was chosen as the Brookhaven Exchange Club’s 2018 Golden Deeds winner at the club’s annual banquet held this year at Homestead at Brookhaven Nurseries. Picture are member Ricky Lagrone and Lloyd. 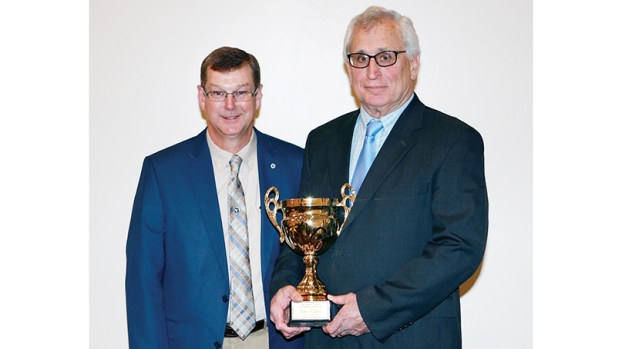 If you ask Sarah Lloyd about her children, she’ll tell you she has had more than she can count though none officially belonged to her.

Lloyd, 65, got her name entered into the Brookhaven Exchange Club’s Book of Golden Deeds Friday night at the club’s 72nd annual banquet. It was held this year at Homestead at Brookhaven Nurseries.

Each year, members of the Brookhaven Exchange Club accept nominations as they search for someone who is worthy to be featured in the book. They look for someone who gives endless hours of their time and talents to make their community a better place to live, said Golden Deeds committee chairman Ricky Lagrone.

It’s important to choose a person who is sincere about helping the community, has an exceptional track record of continued, unselfish giving and enjoys volunteering to help others, he said.

Lloyd, a retired educator, was surprised with the Golden Deeds bronze plaque and recognition for her service to the community. Club members use whatever means necessary to get the winner to the banquet without revealing the surprise.

In Lloyd’s case, friends Lynda and Charlie Campbell called and invited her to be their guest at the dinner. Since Charlie is a member and said he and his wife could bring a guest, Lloyd agreed to attend. She incorrectly surmised the Golden Deeds award could only be presented to club members.

During the introduction of the winner, she wasn’t too concerned when Lagrone mentioned Yazoo City — her hometown — because she’d met a club member who also hails from there.

Then Lagrone talked about the recipient’s involvement with a credit recovery class offered in the Brookhaven School District for students who need help earning course credits. Lloyd served in that capacity following her retirement after 40 years as an educator.

“That’s when my wheels started turning,” she said.

Then he said the four words that shined a “Golden” light that convinced her she’d won — Operation Christmas Child shoeboxes.

“Then the light bulb went off,” she said.

By Monday, she’d hung her plaque in her office at home, and was still processing her multiple nominations and selection. Winning the award is nice, but Lloyd — like other past winners — would rather give the glory to someone else.

“God has been so good to me,” she said.  “He has blessed me in so many ways. I just want to share his love with other people.”

Lloyd began teaching in 1974, continuing her career in Brookhaven when she moved here with her late husband in 1986. Bill Lloyd was the golf pro at Brookhaven Country Club. He passed away three years ago.

“I did not have any children myself,” she said. “God has blessed me richly with nieces and nephews, and the children of my friends, and I taught over 4,000 in my career. I might not have had one, but they’re mine.”

After she retired from teaching, she was asked to go with a group from First Baptist Church Brookhaven to an Operation Christmas Child distribution center in Atlanta, Georgia. She’d often wondered about the program so she agreed.

The group she was with pooled their money to go shopping for items to be used in the boxes to replace items that aren’t allowed, like toy guns and liquid soap. Someone suggested a dollar store they’d stopped at before so they headed over with their money and a tight budget.

They explained to the sales associate what they were doing — sending boxes filled with treasures and love to children around the world — and he got quiet. He’d received a box a year earlier when he was a young boy in Jordan.

“You’ll never know what that box meant to me,” he told them.

“It just hit me,” she said. She’s been involved with OCC since that day.

Children are a huge part of her life, she said.

The OCC program allows her to share the gospel with youngsters who might not hear it otherwise.

“I might not ever see them but I can help introduce them to Jesus Christ as their savior,” she said.

Lloyd said her parents were her role models and just like them, she’s raising the bar higher for herself so she must reach further to grab it.

She’s over the youth group at her church, Jackson Street United Methodist Church, and the children are always eager to participate in volunteer projects, she said.

She’s been instrumental in showing the youth how to make parachutes for parachute drops, where volunteers drop contraband into areas that English Bibles are not allowed, and projects to provide gifts at area nursing homes for Mother’s Day, Father’s Day and Christmas.

“Hopefully this is showing them how they can help other people,” she said.

John Ogden was chosen as the recipient of the John L. Leary Memorial Award, presented annually to an Exchange Club member.