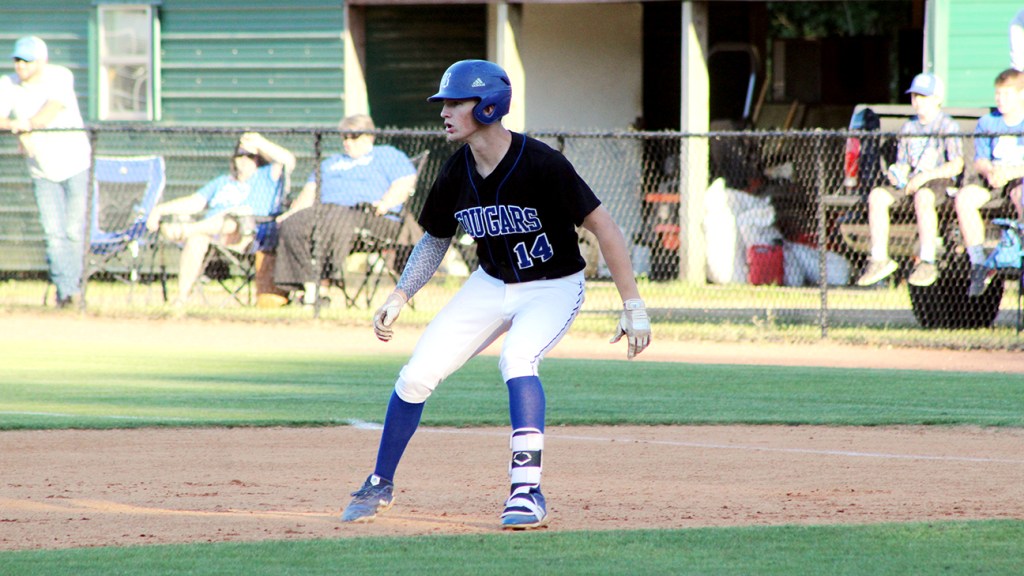 Photo by Cliff Furr Brookhaven Academy senior pitcher/infielder Dawson Flowers struck out six and gave up two unearned runs on four hits Tuesday as the Cougars defeated Amite County 4-2 in Liberty. Flowers also had a hit and an RBI at the plate. Game two of BA’s MAIS AA playoff series begins at 5 p.m. tonight at Williams-Gillis Ballpark. If game three is needed it will immediately follow game two.

The Brookhaven Academy Cougars (16-9) jumped out to a three-run lead and nursed that Tuesday night on their way to a 4-2 win over Amite School Center (16-7-1) in their second round MAIS AA playoff series in Liberty.

In the first inning, leadoff batter Cade Brown reached after being hit by a pitch. Dawson Flowers singled to move Brown to second. Brady Spring hit into a fielder’s choice that saw Flowers out at second but allowed Brown to score after he had taken third on an ASC error.

Spring moved to second on a wild pitch and scored on a two-out double by junior Nick Ogden that put the Cougars up 2-0. BA would then get their final run of the inning when Judson Griffin singled to score Ogden.

BA gave up a run in the ASC half of the first when an error allowed the Rebels to cut the lead to 3-1. Starting pitcher Flowers settled in to get a strikeout to end the inning for BA.

ASC further closed the gap on an RBI single in the second to move within 3-2. Cougar head coach Tyler Parvin says Flowers found his groove after giving up the pair of early runs.

“Dawson did a great job of settling in after the first two innings and pitched really well,” said Parvin.

Flowers threw 95 pitches in seven innings. Both runs were unearned as he allowed four hits while striking out six and walking none.

Collin Waldrop started the BA half of the fourth with a ball that was played as an error by ASC and allowed him to take first base. Waldrop scored later in the inning on a Flowers sac fly.

BA outhit Amite School Center 8-4. The Rebels committed four errors and the Cougars made two. Caston Thompson hit a double for BA while Brown and Griffin had two hits apiece.

The winner of the series will next play Newton County Academy. The Generals swept Glenbrook Academy with 11-1 and 12-9 wins.