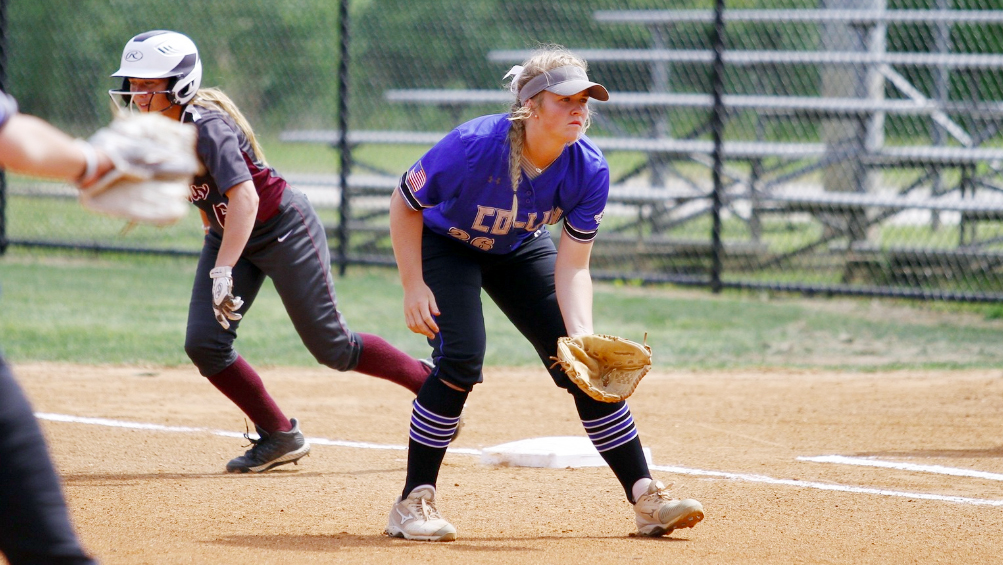 Photo by Co-Lin Sports Information Copiah-Lincoln freshman first baseman Marley Poole (Loyd Star) crouches into a defensive stance Tuesday against Hinds. Poole and the Lady Wolves are on the road Friday for their final regular season games of the season. Co-Lin plays at Holmes beginning at 2 p.m. Friday.

The Copiah-Lincoln Community College Lady Wolves had an excellent outing on sophomore day as the team swept Hinds 8-0, 6-1. The wins were the result of strong pitching and powerful bats from Co-Lin, including a two-home run game from freshman Katelyn Hayman.

The wins keep the Lady Wolves in the hunt for the playoffs going into the final series of the year. Co-Lin faces Holmes Friday in Goodman with the first pitch of game one set for 2 p.m.

The Lady Eagles threatened in the top of the first with their two leadoff batters reaching base on a hit by pitch and a single, but Kaytlon Ward shut down Hinds to get out of the early jam.

Co-Lin responded in their first plate appearance with four runs crossing the plate. Katelyn Hayman led things off with a single and quickly moved to second with a steal. Callie Fortenberry capitalized on the runner in scoring position with a hard hit single to put Co-Lin up 1-0. Fortenberry would eventually score on a passed ball to grow the lead. Harmoni Ashley stepped to the plate with two Lady Wolves aboard and scored both on a high-flying infield single that was the result of some Lady Eagle miscommunication. The popup resulted in two runs, which pushed the early lead to 4-0.

Ward got out of the top of the second with just 11 pitches as Hinds went three-up, three-down.

Co-Lin continued to see the ball well in the bottom of the second as Hannah Walls hit an RBI-groundout that scored Hayman and Julie Scheuermann ripped a ground ball to third to plate Fortenberry and grow the Co-Lin lead to 6-0.

In the bottom of the sixth Delaine McMillan led off with a single on the first pitch she saw. April Lynn checked in to run for McMillan and scored as Hayman hit an RBI double. A single and a walk loaded the bases with Co-Lin leading 7-0. Scheuermann hit a grounder to second, which resulted in an error and the game-winning run, Hayman crossing the plate for the 8-0 run-rule win.

Ward earned the win as she threw the complete game in the abbreviated game. She lasted six innings, allowing one hit and zero runs while striking out eight and walking zero.

Fortenberry led the Lady Wolves with three hits in four at-bats, while Scheuermann and Ashley posted a team-best two RBIs each.

Hayman kept her hot bat going in the opening frame of game two as the freshman crushed the second pitch of her leadoff at-bat over the left field fence. The solo shot was the first run of the game.

The second and third innings were scoreless, but Amber Brinson got aboard in the bottom of the fourth with a double. A walk and a single from Tori Pettit loaded the bases for the Lady Wolves. McMillian brought in Brinson with a single to put the Lady Wolves on top 2-0.

The Lady Wolves grew that lead to 3-0 in the bottom of the sixth when Pettit capitalized on a 3-1 count. The hard-hit single plated Carly Polk who was running for Scheuermann who led off the frame with a single.

Hayman followed with a towering homer to left, her second of the game and fourth of the year. The three-run moonshot put the Lady Wolves up 6-0 going into the seventh.

Hinds got one back with a solo homer in the top of the seventh, but that was it for the Lady Eagles as Co-Lin secured the sweep with a 6-1 win.

Makenzie Smith led the Lady Wolves in the pitcher’s circle. She allowed two hits and zero runs over six innings, striking out five. Mackenzie Gros threw one inning in relief out of the bullpen and gave up one run on one hit.