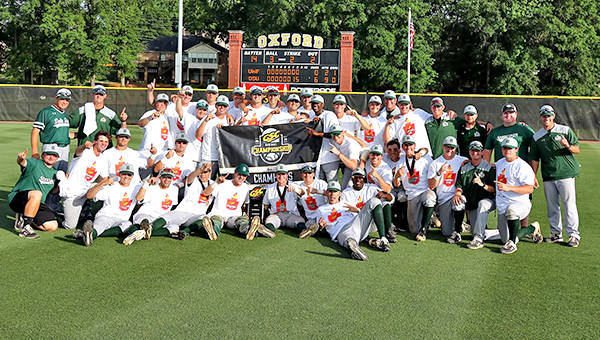 Hunter Riggins threw a two-hit shutout, Hayden White went 2-for-4 with one RBI and two runs scored, and the Statesmen beat West Florida 6-0 in the GSC Tournament championship game on Tuesday.

Delta State battled back through the losers’ bracket after dropping its second game of the tournament on Saturday. It won four consecutive games, including two on Tuesday, to win its 15th conference championship.

It is Delta State’s third GSC title in four years. It has played in the tournament championship game seven times in the past eight seasons.

Delta State (39-12) beat Valdosta State 7-6 in an elimination game earlier Tuesday. The Statesmen scored four runs in the top of the seventh inning, two of them on a double by Darek Sargent, to take a 7-3 lead and then held off a last-ditch rally by Valdosta State (30-21) in the ninth inning.

The championship game had almost as much drama, at least for a little while. Riggins and West Florida’s Andrew Vaccacio kept their opponents off the board through the first six innings.

In the seventh, the Statesmen finally broke through. White led off with a single, then they loaded the bases with another hit and a walk. White scored on a two-out single by David Herrington to put the Statesmen ahead 1-0.

Delta State blew the game open with five runs in the eighth inning. White’s RBI single made it 2-0, and he scored on another single by Michael Allen. Herrington also had an RBI single during the rally.

Delta State will play in the NCAA Division II South Regional, May 16-19, at a site to be announced on Sunday night.

A couple of Mississippi colleges are helping a neighbor in need. Southern Miss and Mississippi State’s athletic departments both announced... read more