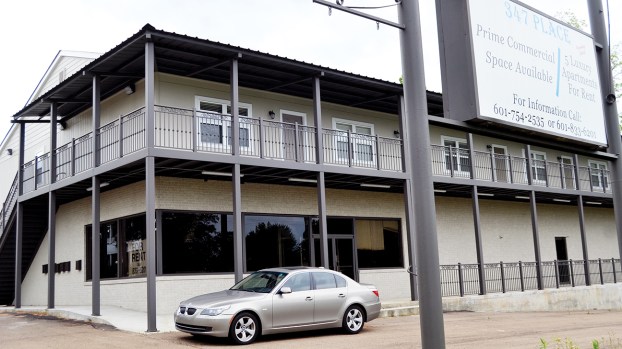 Photo by Donna Campbell 347 Place houses five apartments upstairs and a retail space downstairs. Owners Jim Elliott and Amanda Warren are asking the city to permit a zoning ordinance exception that would allow them to add two apartments on the first floor of the building. 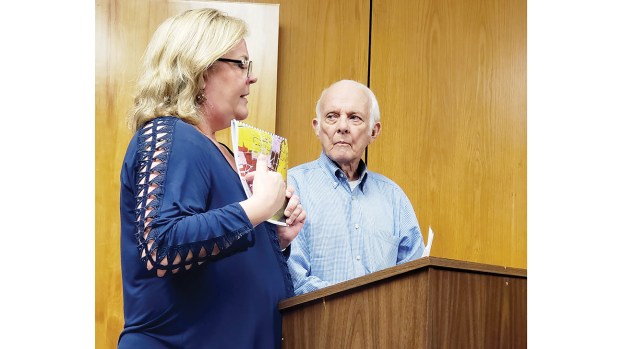 Photo by Donna Campbell 347 Place houses five apartments upstairs and a retail space downstairs. Owners Jim Elliott and Amanda Warren are asking the city to permit a zoning ordinance exception that would allow them to add two apartments on the first floor of the building.

A father-daughter business team is hoping Brookhaven aldermen will step in and tweak a city ordinance they say could allow them to put apartments on the bottom floor of their commercial building.

Jim Elliott and Amanda Warren came before the Board of Aldermen Tuesday night to request permission to add two apartments to the building they own at 347 West Cherokee St.

Elliott and Warren purchased the Herndon Eye Clinic about a year and a half ago and have worked to remodel the exterior as well as the interior. The building, billed as 347 Place, includes 5,000 square feet of commercial space on the first floor. Five apartments with tenants are on the top floor.

Elliott wants to create two apartments on the first floor to meet demand for rental housing in the downtown area. The front 2,500 square feet of space adjacent to Chickasaw Street will be kept commercial, he said.

“As of right now we have five apartments upstairs and, believe it or not, I got two calls today wanting an apartment,” he said.

Elliott said he gets several calls about apartments each week.

He and Warren met with the Brookhaven Board of Adjustments about three weeks ago to discuss zoning requirements and discovered he’d need a special exception to the ordinance to put his plans in place in the central business district.

Elliott thinks the wording of the ordinance gives the board authority to allow residential housing on the first floor of commercial buildings.

“We believe that (the ordinance) provides for a special exception to be able to put in downstairs ground-floor apartments,” he said. “I thought this exception language was not put in by accident, it was put in for a purpose. And that’s what we are coming to y’all with.”

He said the building is not located in a high density area. It’s flanked on the west by Bank of Brookhaven and on the east by Mary’s Barber Shop.

“Between Amanda and I, we have contacted all of our neighbors to tell them what we would like to do. There is nobody who opposes what we’d like to do,” he said.

More than 50 parking spaces are available for the apartments and the business. That gives them the required two spaces per apartment with plenty for whatever business moves into the commercial space downstairs.

“There would be absolutely no on-street parking for our apartments,” he said.

The entrance and exit to the apartments would be on the backside of the building. The parking lot has not been striped yet.

The top floor is reached with an outside staircase.

Warren said windows that are fire marshal approved will be installed.

“So we’d have two means of escape if needed,” she said.

Elliott said it appears to him that the Board of Adjustment, though favorable to his proposal, does not want to set a precedent.

“In my opinion, the city probably, if they were to grant us this exception, would need to further define what the special exception would encompass,” he said.

Elliott said his may be the only business in the downtown commercial district that would meet the criteria for his proposal.

City Building Official David Fearn said Fred’s is the only other location he thinks could qualify for a similar special exception. The store is one of many that will be closed soon and Fearn said apartments could be a possibility in the rear of the store.

Elliott would like to begin work on the apartments soon.

“There’s no major rush,” he said. “We would like to get started. We’ve gutted the whole downstairs.”

Fearn said the Board of Adjustments did not make a decision on the proposal.

“The ordinance said it has to be approved by the Board of Adjustments and they didn’t approve anything on it,” he said.

The Board of Adjustments put a 90-day stay on it so Elliot could ask the Board of Aldermen to revise the ordinance or write a new ordinance.

“I didn’t have any support calls,” he said. “I had a couple that were questioning, saying we shouldn’t do that, saying that it opens up a can of worms.”

The board took no action on the proposal.