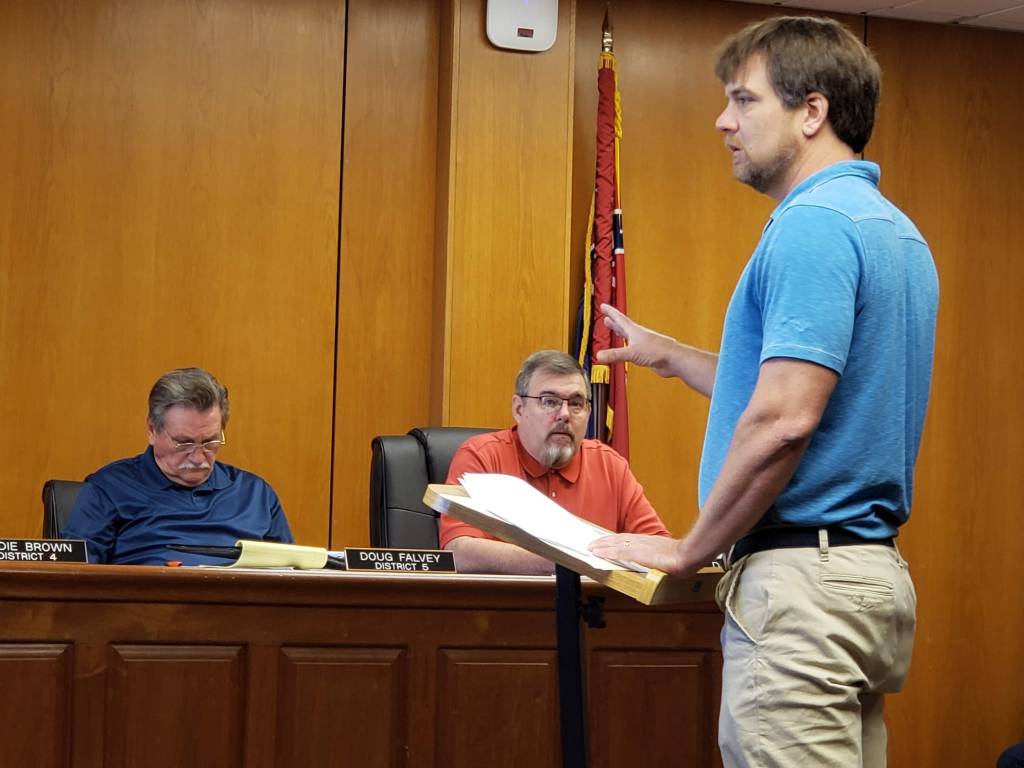 Photo by Donna Campbell Ethan Allen, a staff geologist with Environmental Management Services out of Hattiesburg, updates Lincoln County Supervisors about the Keystone property since its involvement in the MDEQ’s Brownfield program. Pictured are, from left: District 5 Supervisor Doug Falvey, county administrator David Fields and Allen.

A half dozen letters signed by the Lincoln County Board of Supervisors hit the post office this week to be sent to property owners around the Keystone property at the industrial park.

The letters serve to update them on the county’s Brownfield agreement with the Mississippi Department of Environmental Quality.

The agreement details the county’s plan with MDEQ and must be filed with the chancery clerk’s office “so that if anybody ever goes back and researches this property they know it’s a Brownfield property,” said Ethan Allen, a staff geologist with Environmental Management Services out of Hattiesburg.

As part of the agreement, a 30-day public comment with MDEQ opened April 30.

When the public comment requirement is fulfilled, Environmental Management Services will put in three more wells — in addition to the five already there — and start the sampling program, he said.

MDEQ approved the county’s corrective plan last month for the Keystone property, which contains a small amount of contaminated groundwater beneath the surface.

The plan will protect future owners — American Railcar Industries has an option to purchase the property — from any liability from existing conditions.

EMS was hired by the county to place the former Keystone manufacturing property into the Brownfield program. The agreement is an environmental checkup that assesses a property for contamination and clears a potential purchaser from liability if environmental hazards are discovered. Brownfield agreements are common in commercial property negotiations.

The corrective plan calls for the county to monitor the site and the contaminated ground water deep below the surface.

Allen said supervisors will need to need to let DEQ know if the condition of the property changes, “like somebody developing a building on it or if somebody takes an interest in the surface rights, like somebody buys it from y’all, then they’ll have to prove that they can abide by this Brownfield agreement also, but I’m not too sure that’s in the cards for this property.”

Garrick Combs, executive director of the Lincoln County Economic Development Foundation, said ARI is satisfied with the timetable so far.

“Their attorneys know what is going on and have signed off on what we are doing,” he said. “This is a prerequisite for them executing the second half of their option and taking ownership of the property. Their attorneys have been involved with this from the beginning.”

“They’re aware of it. They want this to happen. That’s why they have this Brownfield program in place,” Allen said.

MDEQ required letters be sent to the contiguous property owners.

“I’ve been in touch with every property owner around the site that we have to send a letter to,” Combs said. “There’s no threat to any people. No threat to wildlife, animals. We’ve got data going back to the early 2000s and nothing has changed. We don’t anticipate any change.

“They want samples of ground water that’s 70 feet deep and keep an eye on it and that’s all they’ve asked us to do, until they give us a ‘no further action’ letter then we don’t even have to do that anymore.”

If ARI decides to exercise its option, supervisors and the company will negotiate the price of the 19.23 acres and large but run-down manufacturing facility.

The old Keystone facility, which produced wire cloth, was constructed in 1956 and closed down in 2006. Lincoln County took ownership of the site away from Keystone a decade ago when the company skipped a year’s worth of lease payments — Keystone sent the full amount by check shortly afterward, but supervisors decided to keep the building in the hopes of offering it up for redevelopment.