Marching for freedom: Teen makes way through city on journey 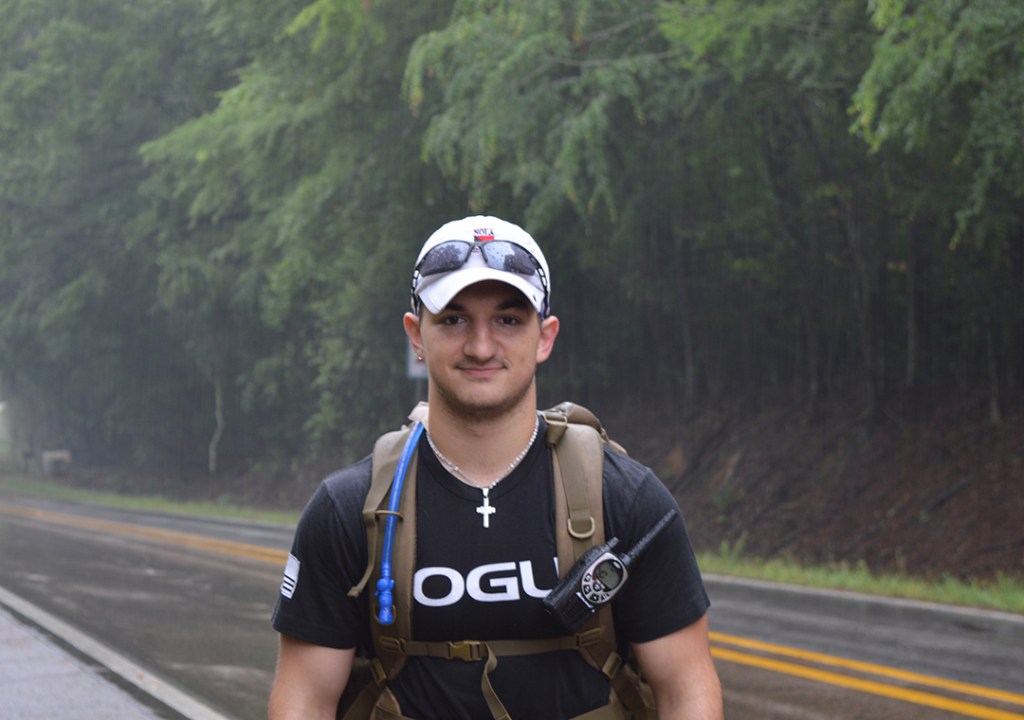 A Louisiana man is trekking from his home to Vicksburg to show support for veterans. He passed through Brookhaven Friday.

Austin Firmin, 19, is currently marching on foot from his hometown in Covington, Louisiana to Vicksburg, a distance of more than 160 miles. He is being followed by car by his father, Al Firmin.

Firmin is completing a ruck march, also known as a forced foot march, at a fast pace while carrying a load. It’s a common military exercise, he said.

Firmin is not only marching to show support for veterans, but also to raise money. The money donated will be split evenly between the American Legion, Semper Fi Fund, K9s for Warriors and Operation Homefront.

He understands that the freedom Americans enjoy does not come free, as servicemen and women put their lives on the line every day to protect these freedoms.

“It was the least he could do for others that have served and are serving right now,” Al Firmin said.
Firmin is marching to the Vicksburg National Military Park. He picked this location because of the importance of the battlefield.

“What better of a place than somewhere that battles were fought on?” said Austin Firmin.

The teen set out to complete the trek in four days. As of Friday morning, he was on day three and had passed the halfway mark. He set out on May 8 and has rested each night. The weather has not cooperated.

“He’s gonna do everything in his power to make it in four days,” Al Firmin said.

Originally, Firmin was supposed to have a partner, Cameron Richards. Richards, a friend of Firmin’s, recently tore his hamstring while at a track meet, so he could not join Firmin in his endeavor.

The idea of setting out on a march sparked from wanting to give back for what veterans have sacrificed.

“I’m paying it forward to them for the sacrifices they’ve given,” Austin Firmin said.

Firmin is a 2019 graduate of Covington High School. He will be attending Louisiana State University in the fall. He is enrolled in LSU’s Air Force ROTC. His dream is to be a pilot in the Air Force.

He first became interested in the Air Force and flying after attending an air show as a child.

“I want to challenge myself as much as possible, and I just want to fly,” Austin Firmin said.

He’ll be a fourth-generation service member when he enlists. His father and grandfather were both in the Air Force, and his great-grandfather was in the Army Air Corps.

His uncle is on active duty in Afghanistan right now as a helicopter pilot.

This kind of endeavor is tasking on both the mind and the body, but Firmin is prepared to finish strong.

“It’s going to physically hurt, but I’ll feel emotionally accomplished,” Austin Firmin said. “Being able to complete it will be very satisfying for me.”