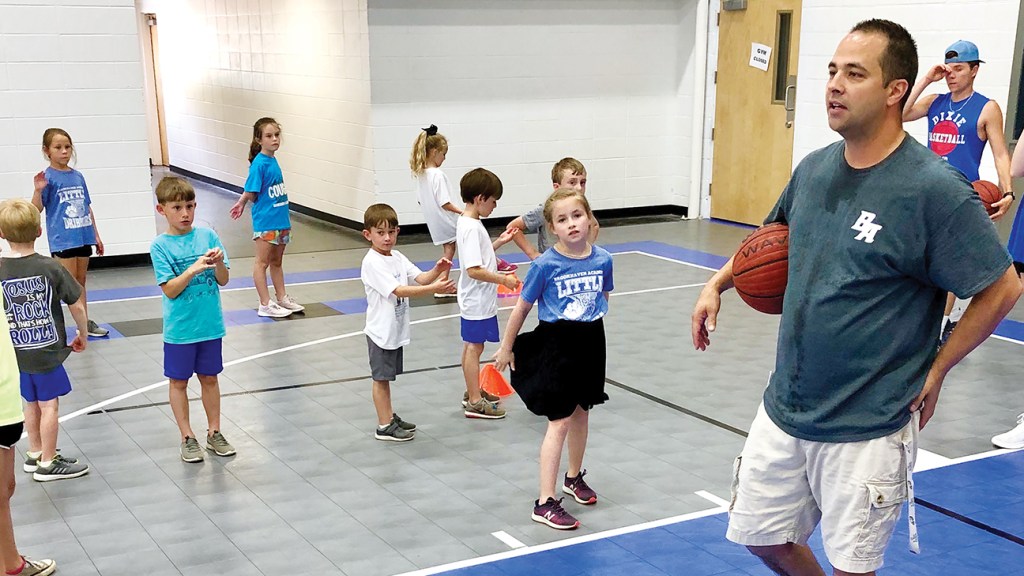 Photo by Brian Emory Ron Kessler directs elementary students Monday during a basketball camp at Brookhaven Academy. Kessler has been hired to replace Jason Case as head girls’ basketball coach for the Cougars.

The word during last basketball season was Brookhaven Academy girls’ coach Jason Case might be looking to hire his own replacement in the near future. Case also serves as head of the school and with his daughter Jana graduating this year, the talk was that he’d only give up coaching if the right candidate could be found to replace him.

“I’m very excited,” said Kessler Monday as he prepared to help with an elementary camp going on this week at the school. “This is a great opportunity for myself and my family. I had wanted to get back on the sideline, but the situation had to be right and this one checks all those boxes.”

Kessler has most recently been serving as the Director of Parks and Recreation since returning to southwest Mississippi in 2016. From 2003-2010 he led the Wesson boys’ basketball program. Kessler is originally from Philadelphia, Pennsylvania, and is a graduate of Liberty University.

His first coaching job in Mississippi was as an assistant varsity and head junior high coach at Forrest County AHS. Hired at the age of 26 by Wesson, Kessler worked closely with former Lady Cobras head coach Hugh Webb as the duo toiled together to build their programs.

During his time at Wesson, Kessler usually fielded an overachieving group that always gave great effort. After leaving Mississippi he returned to the East Coast and got a job as an assistant boy’s coach at his alma mater, Life Center Academy in Burlington, New Jersey.

At Life Center he was hired to assist then-head coach Pervis Ellison. Ellison was a standout player at the University of Louisville before playing 11 years in the NBA. After the girls’ head coach had health issues that led to open-heart surgery, Kessler moved to the position of head girls’ coach at Life Center.

The Life Center girls’ team was filled with international talent. During his time there, the team had 11 players sign with Division I schools. The Lady Warriors had alums play for schools such as Rutgers, St. John’s and Georgia Tech.

When Kessler and his wife Mandy had twins Carter and Averie, basketball took a backseat to family obligations. The birth of the twins led to Kessler leaving Life Center and returning to McComb to be near Mandy’s family.

To stay connected to the game he began officiating high school basketball games three years ago. He says being a former coach helped him be a more sympathetic ear as a referee.

“I probably let coaches get away with a little more talking than most because I knew what it was like to be frustrated by a call,” said Kessler. “And I’ll probably be more patient with officials this go-round. I’m a little more mature and a little less fiery than I was as a young coach.”

He inherits a Brookhaven Academy team that loses Case and her over-20 points per game scoring average to graduation. The Lady Cougars also graduated senior starter Macy Smith.

“I’m taking them to camp at Co-Lin and then we’ll play at several different places after and end our summer season with a camp at Southwest,” said Kessler. “We’ll practice along with playing games and use that time to create our identity. I’d like for us to be a team that’s known for playing with intensity on defense. If you can do that then you get so many easy points off of turnovers and transition.”

Kessler will serve as an assistant athletic director and assistant head of school in addition to his coaching duties.

“I wanted to fill the position with someone that sees coaching like I do,” said Case. “Someone that focuses on influencing young girls to be outstanding young ladies in their efforts, attitudes and walk with Christ. Someone that places this focus way above any championship, record, or resume, I am very confident that Ron Kessler fits this mold and we are very excited to have him on our team at Brookhaven Academy.”

Kessler also feels a touch of the Divine in how all stars aligned leading to him accepting the job.

“My family is more important to me than anything and I knew when the twins were toddlers, I didn’t have the time available that coaching demands,” said Kessler. “They’re five and a half now and I’d hoped that maybe the right situation would come along. When Jason Case and Ron Rushing approached me to gauge my interest in the job it truly felt like God’s timing.”