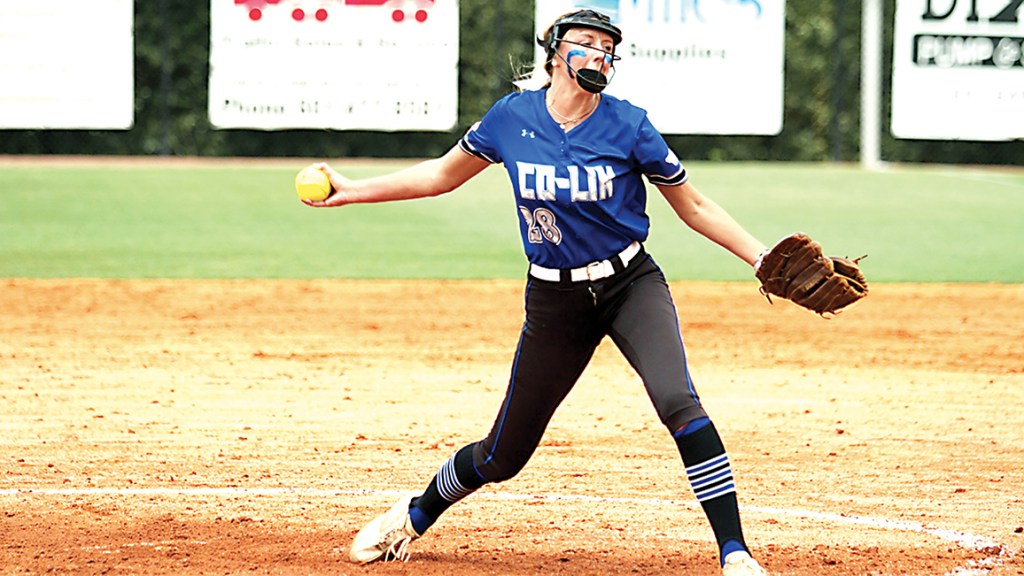 Photo by Co-Lin Sports Information Sophomore Makenzie Smith delivers to the plate for Copiah-Lincoln last Thursday against Southwest. The long delayed game was wrapped up on Monday in Magee after the Lady Wolves and Bears completed the seventh inning.

Ninety-six hours and 23 minutes after the first pitch on Thursday, the Copiah-Lincoln Community College Lady Wolves defeated Southwest Mississippi Community College, 8-5. The delay came from multiple days of rain in Ellisville that forced the MACJC State Softball tournament to be moved to the Magee Sports Complex in Magee. The game was abbreviated Monday as the teams only needed to play the seventh inning to close out the contest.

Co-Lin was unable to get any runs in the top of the frame, but Southwest came out swinging as the Lady Bears got two of their first three batters on base. A double to center field plated two runs and cut Co-Lin’s lead to 8-5. Katelyn Ward entered the circle with one out with one runner aboard. A walk put Lady Bears on first and second, but Co-Lin’s Delaine McMillan fielded a groundball at shortstop, tagged the runner advancing to third, and went the short way to second for a double play to secure the 8-5 Co-Lin victory.

Thursday Co-Lin lit up the board in the top of the first after Callie Fortenberry roped a triple. The sophomore’s stand-up triple quickly turned into a run as she scored on a passed ball.

After a three-up, three-down frame in the bottom of the first, the Lady Wolves scored another on an error that plated Hannah Walls who also reached base on an error, making it 2-0.

Ky’Albri Washington reached base in the top of the fourth on yet another Southwest error. April Lynn checked in to run for Washington and scored as Julie Scheuermann crushed a double off the fence in left field. The shot put Co-Lin on top 3-0 going into the bottom of the fourth.

The Lady Bears got two back in the bottom of the fourth as a run crossed the plate on a passed ball and another on an error.

Fortenberry reached base on a single early in the fifth and was quickly brought around for a run as Poole hit a line drive double to deep centerfield. The run grew the lead to 4-2.

The back-and-forth play continued as the Lady Bears once again cut the lead down to one, 4-3, with a single up the middle. The hard-hit ball grazed Makenzie Smith’s facemask, who checked in during the fourth inning.

The Lady Wolves had a big inning in the top of the sixth as a pair of walks and an error loaded up the bases. Katelyn Hayman drew a walk to score one before Fortenberry grounded into a fielder’s choice to score another. Poole continued the big frame as she ripped an RBI groundout. Amber Brinson also got in on the scoring with a sacrifice fly to left to round out the inning. Going into the bottom of the sixth the Lady Wolves led 8-3.

Co-Lin retired the bottom of the sixth in order on a pair of groundouts and a strikeout before the game was delayed due to the inclement weather.