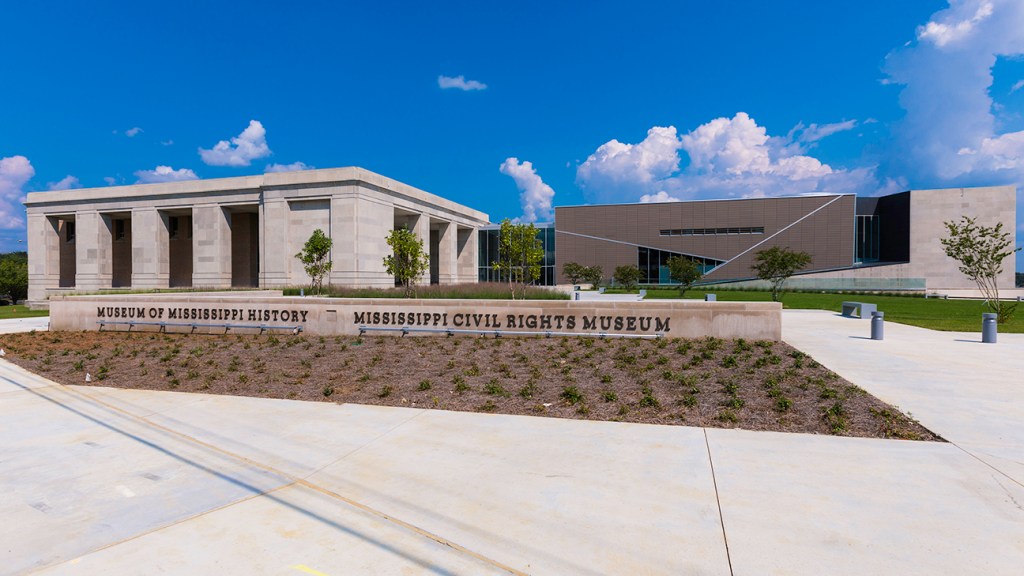 In February, the Mississippi Department of Transportation held a ceremony to designate a portion of Highway 24 in memory of Anne Moody. She was an author and civil rights activist, but you might recognize her best for a stand she took at a Woolworth’s five-and-dime store in the ’60s. That’s where she became part of an iconic image that captured the nation’s attention.

May 28 will mark 56 years since Jackson Daily News photographer Fred Blackwell took that eye-grabbing black-and-white picture. Woolworth’s is long gone from Capitol Street, and the only sign of the event is a historical marker sitting in a grassy area by a sushi bar. When I visited the spot, a security guard stopped his Segway to talk to me about the sign.

“People come by, they stop. They take pictures of it and stuff like that,” he said.

Stephenie Morrisey of the Mississippi Department of Archives and History was there, too. She read the marker about the 1963 struggle aloud: Three black Tougaloo College students sat down at the white lunch counter seeking service. The nonviolent protesters were attacked by an angry mob . . .

Morrisey explained that Capitol Street looked a little different back then. Instead of towering office buildings, busy storefronts lined the thoroughfare. That’s what Ed King remembers. He was the chaplain at Tougaloo, a private college originally established for the education of emancipated slaves. Although King is white, he was a key figure in the Civil Rights Movement.

“White merchants would not allow black women to try on clothes or black men to try on shoes, much less have access to restrooms or lunch counters or anything like that,” he recalls.

King was at the lunch counter sit-in. He was a “spotter,” someone sent to observe what happened. He wore his clerical collar and filled his pockets with plenty of nickels and dimes. He’d need them as he called in reports to Mississippi’s NAACP field secretary, Medgar Evers.

The reports were ugly. According to King, onlookers grabbed a young black man at the counter, threw him to the floor, beat him and kicked him unconscious. They attacked the two women at the counter, dragging them by their hair. The mob poured mustard on people’s hair and used paint from Woolworth’s counters to paint the ‘n’ word on the back of their clothes.”

The abuse went on for three hours. Management finally closed the store, but not before Blackwell snapped the iconic photograph. He stood on top of the lunch counter and took the photo of three sit-in participants covered in mustard, ketchup and sugar as an all-white crowd jeered.

Americans in Maine and Minnesota and Nebraska saw the picture and began to ask questions. Why do people have to agitate? Why should there be so much violence? The image eventually went worldwide, bringing pressure on the U.S. government.

A lot has changed since then. In 2017, Mississippi opened a sprawling, high-tech civil rights museum — the only state-operated museum like it in the country. Richard Woollacott was the exhibit designer who helped select the photographs on display there. He told me one of the challenges was keeping them from becoming like wallpaper: “The images were so powerful that we had to be very careful. If you run too many of them, you desensitize the visitor to the power of the individual image.”

Memorabilia from the 1963 lunch counter sit-in is on display in Gallery 3. As visitors linger over NAACP flyers, a video reel shows picketers outside the Woolworth’s store. A large touchable copy of the recognizable lunch-counter photo is displayed at an angle, waist-high.

John Spann is the museum’s curator of education. When he looks at the picture of the three protesters, he homes in on Anne Moody: “Moody’s book, ‘Coming of Age in Mississippi,’ really helped me understand the local person’s point of view of the civil rights movement. This was somebody who was actually in the trenches, actually going to jail, actually experiencing the brutality.”

On the day I interviewed Spann, more than 4,000 visitors walked through the museum. When they stopped by the “Capitol Street Confrontations” display, they saw an example of citizens who worked together for change. They also saw what a commitment to nonviolence looks like. That’s the real educational impact, according to Spann.

“They were able to sit there and remain nonviolent for a cause bigger than them, so people like me can enjoy the freedom that I have now. People coming through here see that and wonder how can they do that? It takes a strong person to just sit there and endure all of that pain and beating and people talking nasty to you. They had people like me in mind. They were really thinking about all of America.”