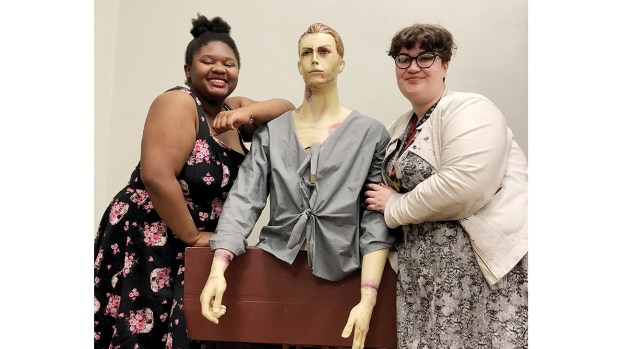 Photos submitted Above: Pictured are,from left: MSA theater students Tivona Thomas and Alexandra Hawk with a mannequin after its transformation into a prisoner of war. Below, the mannequin will be used in a display with the Vietnam Traveling Memorial Wall in Jackson to depict prisoners of war in the infamous Hanoi Hilton. 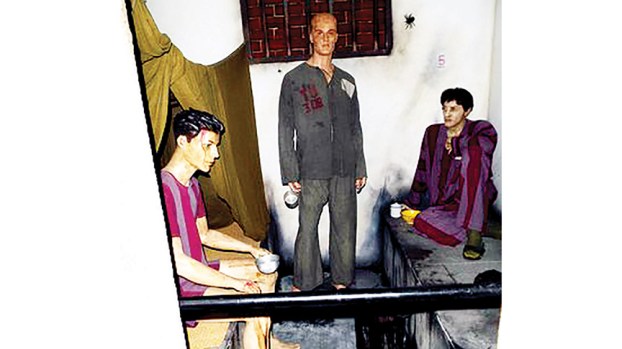 Photos submitted Above: Pictured are,from left: MSA theater students Tivona Thomas and Alexandra Hawk with a mannequin after its transformation into a prisoner of war. Below, the mannequin will be used in a display with the Vietnam Traveling Memorial Wall in Jackson to depict prisoners of war in the infamous Hanoi Hilton.

The Vietnam Traveling Memorial Wall will make an escorted trip through Lincoln County today by way of Hwy. 84 and I-55 from Camp Shelby to a Harley-Davidson dealership in Jackson.

The truck carrying the wall — a three-fifths scale of the Vietnam Memorial in Washington, D.C. — will make a fuel stop at B-Kwik Super Jack Shell station at Hwy. 84 and East Lincoln Road around 1:30 to 2 p.m. Troopers with the Mississippi Highway Patrol, bikers with the Patriot Guard, veterans and deputies with the Lincoln County Sheriff’s Department will be part of the escort.

The public is asked to come out and show their patriotism by waving flags as the wall passes. Parking at the gas station is discouraged so the caravan can stop and refuel.

The wall will be on display 24 hours a day for the duration of the 17th annual Trail of Honor at the Harley-Davidson of Jackson, said Hervey Littlefield of Brookhaven, a Patriot Guard rider and Vietnam veteran who is on the board for the Trail of Honor.

The Commemorative Air Force CAF will be performing flyovers in warplanes from the past including the T-6 Warbirds on display at the Madison Bruce Campbell Airport CAF hangar. Individuals can ride in airplanes for an additional fee.

Each May, the Harley dealership at 3509 I-55 South in Jackson is closed to normal business and transforms to host the Trail of Honor, which began in 2003 as a way to welcome the “Run for the Wall” motorcycle riders and to honor veterans. It started as a pit stop on the run with a single Civil War cannon and has become a three-day event staffed by more then 300 living historians and volunteers. It annually attracts more than 35,000 visitors and was named one of the Top 20 events of 2018 by the Southeast Tourism Society.

The Trail of Honor — which is free and open to the public — features historically accurate demonstrations of military life in a walking trail through history. From the French and Indian War, to the current operations in Iraq and Afghanistan, the Trail of Honor gives the public an insight into what service men and women endured while fighting for freedom.

The event includes battlefield re-enactments from the Civil War, World War II and Vietnam War and military armor and aerial displays. Historians will be on hand at encampments representing each American war. Active duty personnel representing each branch of the military will also attend.

Littlefield encourages Lincoln Countians to bring their families to meet the veterans from various wars who will be attending.

One of the displays at the Trail of Honor will feature the artistry of students from the Mississippi School of the Arts in Brookhaven.

Tim Lea, director of veterans services at Copiah-Lincoln Community College, was asked to help find a group who could use their makeup skills to transform a plain mannequin into a prisoner of war to be used in the Hanoi Hilton exhibit.

Lea asked a few people at Co-Lin but “no one felt they had the capability to do service to the request,” he said. “I then thought of MSA, eventually was led to Dr. Brooks, and the rest is a success story.”

Instructor Robert Brooks and his students took to task.

“Robert quickly volunteered to see what could be done,” Lea said. “His students readily agreed, the mannequin was delivered, and their talents came to bear. The finished product was just delivered and the Trail of Honor group was ecstatic on the results.”

Lea credits students Tivona Thomas of Clinton and Alexandra Hawk of Southaven specifically for their work.

“They researched the subject area thoroughly which guided the effects applied,” he said.