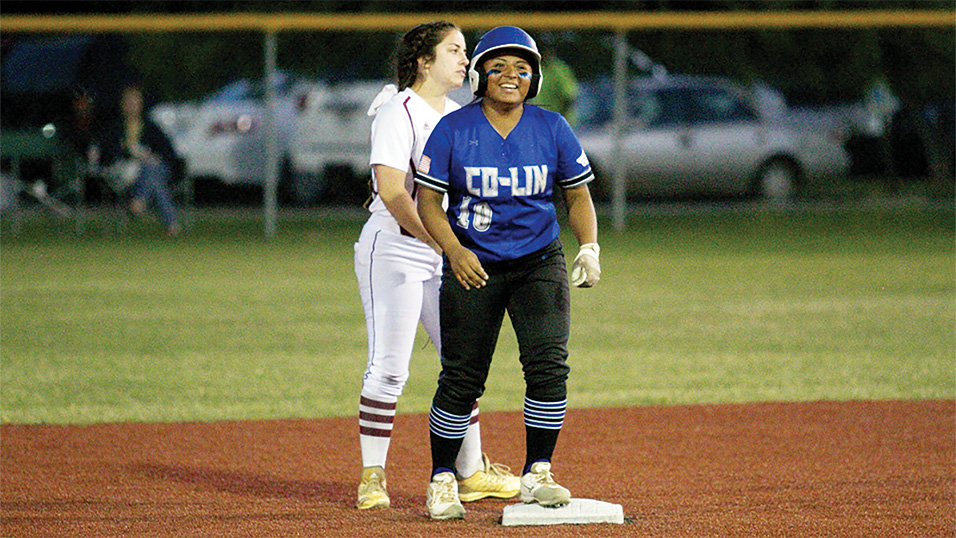 Photo by Co-Lin Athletics The Copiah-Lincoln Lady Wolves (30-15) play today at 4 p.m. against Itawamba (36-12-1) on the campus of Pearl River CC in Poplarville in the first round of the NJCAA Region 23 Tournament. It's the first region tournament appearance for Co-Lin since 2010. Freshman infielder Delaine McMillan (Northeast Jones) proudly stands on second base after hitting a two RBI double Monday night against Jones College. McMillan also hit a solo home run in the 7-4 Co-Lin win over the Lady Bobcats.

hey left at breakfast on Monday morning and didn’t get into bed until after midnight, but the long day and night at the ballpark were worth it for the Copiah-Lincoln Lady Wolves softball team.

Co-Lin didn’t just beat Southwest, Northeast and Jones in the MACJC State Tournament — they exorcised some demons while showing toughness and grit along the way.

The 7-4 win over Jones was the first for Co-Lin since April 19, 2011. During the following eight years the Lady Bobcats from Ellisville have sat squarely on top of the MACJC softball pecking order. JC won the national championship last season and have racked up a case full of state and region titles during their recent run.

Co-Lin head coach Meleah Howard says for her team just to reach the state tournament was a big check on their preseason to-do list.

“Before the season we made a goal to make the state tournament,” said Howard. “It came down to the last game of the regular season and we beat Holmes to get in. When we got in I told the girls we were going to have fun, play hard, and that we had the potential to surprise some people.”

In the opening game of the tournament back on May 8 at Jones, the Lady Wolves dropped a 6-4 loss to the Gulf Coast Lady Bulldogs. CL battled back after getting down 6-0 and Howard says her team settled in after spotting GC the big lead.

“Things got away from us early against Gulf Coast,” said Howard. “I felt like we got overwhelmed by the moment and the atmosphere, but from that moment on they haven’t looked overwhelmed again.”

Calling Southwest and Co-Lin rivals feels like you’re selling the connection short. When the two teams play there are former high school teammates playing against each other on both sides. With travel ball, some of the connections go back to elementary school. A single inning had to be played Monday morning to finish a game that Co-Lin was leading 8-3.

How to handle a game that had been delayed for four days isn’t exactly in the coaching softball manual.

“We made it interesting and gave up two runs to let Southwest get within 8-5, but the girls made the plays to end the game,” said Howard. “My team wanted to keep playing and weren’t ready for the season to be over with.”

Co-Lin then moved on to face Northeast where the Lady Wolves won 5-3 to set up their elimination showdown with Jones.

On April 3 the two teams met in Ellisville and Jones won game one 5-4 in eight innings. Howard says her team took lessons from that loss.

“Our freshman pitcher Kaytlon Ward pitched really well in that game and we had an error that cost her the win,” said Howard. “She was strong from the start on Monday and Mackenzie Gros did a great job of slamming the door in the seventh in a relief role. Having confidence is key. We wanted to play tough and believe we could win.”

When Howard was hired to replace longtime Co-Lin coach Allen Kent in the summer she knew that recruiting would be an important part of her job, but she also wanted her current team to know that they’re improvement was her most important goal.

“I pushed them in the Fall and early on I think some of them weren’t sure about me,” said Howard. “I didn’t blame them because it can be tough when you’re playing for a different coach than the one who signed you. It started clicking when we played our Fall games and from there they fully bought in.”

The 30-win season for Co-Lin is the best for the program since Kent won a state title in 2009, the year after Howard graduated from the school as a student-athlete. This is the earliest postseason exit for a Jones team since 2010.

“Marley Poole has been our most consistent bat all season and she got us going early against Jones with a single,” said Howard. “Delaine McMillian has been playing really well for us over the last few weeks. We slid her to shortstop and she’s been really solid there and confident at the plate.” McMillian hit a double, a home run, and drove in three runs in the win over Jones.

Co-Lin next plays in the region tournament that begins today at Pearl River. The Lady Wolves play state champion Itawamba at 4 p.m. The team split on April 7 with ICC winning game one 7-0 and the Lady Wolves bouncing back to win game two 4-3 in Wesson.

Come whatever today, the pride in Howard’s voice is easy to pick up on when she talks about this group of players.

“The growth of this team has been remarkable,” said Howard. “At a community college your time is limited, and you’ve got to learn your players and they’ve got to learn you fast. This team has gotten better, battled in close games, and showed a ton of toughness since we began practicing at the beginning of the school year — very proud of them.”

Sports editor Cliff Furr can be reached at sports@dailyleader.com.