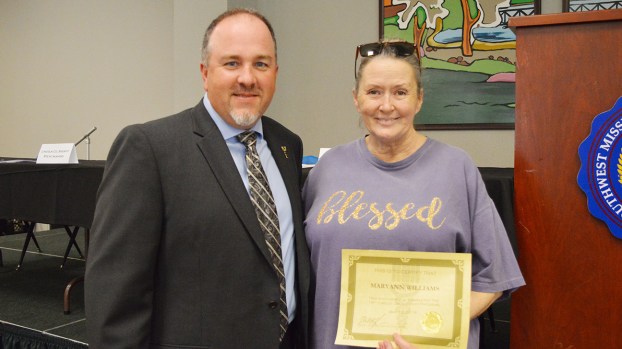 Williams, 61, is a Lincoln County graduate of the 14th Circuit Drug Court. She is originally from Tylertown, but currently resides in Brookhaven.

“The stats were against someone my age,” she said.

Williams became addicted to pain medications nearly 30 years ago. She said things started to get much worse a decade earlier.

“I didn’t care,” Williams said. “My occupation was my addiction.”

She had formerly worked various banking and accounting jobs in Tylertown.

There wasn’t one single event that caused Williams to fall into addiction, but a string of several losses in her life that she was unable to cope with, she said.

She lost her only child not long after she was arrested in August of 2013. She had multiple charges, including a felony, and was indicted by a grand jury.

“I didn’t know anything about drug court,” Williams said. “I was pretty resistant to it,”

The program requires participants to spend at least three years in the program; it took Williams five.

“I wasn’t ready to get out of drug court in three years,” Williams said.

She had previously attempted treatment at a program at Clearview Recovery Center in Moselle.

She wasn’t indicted until the court met in Walthall County, where she lived at the time.

Because she had moved to Lincoln County in 2014, she transferred from Walthall to Lincoln.

Even though she had gone through several rehabilitation programs and had good experiences, it still wasn’t enough.

“Addiction is like a hurricane, it’s deadly.” Williams said.

During her time in drug court, she went to jail twice due to failure of the random drug test.

Both sentences landed her in Columbia’s Department of Corrections for 10 days.

She credits Clay Wooley and John Douglas for helping her get into the New Leaf Recovery program at Alliance Health Center in Meridian.

“They were instrumental in getting me into inpatient treatment,” Williams said. “They are stellar in my book.”

“I wanted my life back. God used drug court to make it happen,” Williams said.  “I’m filled with gratitude for all the blessings and restoration of recovery. My family has loved and supported me through it all.”

Now that she is finished with drug court, Williams plans to live her best life and attend regular meetings, even though she is no longer in the program.

She hopes that others will take the opportunity and participate in drug court.

“My hope is that my young friends will not wait until middle age to get their lives back on track,” Williams said.

“Drug court is not a fad. It gets the results,” assistant district attorney Brendon Adams said. “It helps heal broken people, broken families and gets people on the right track.”

There were 26 participants eligible for graduation, with two not present.

“This is a beginning, not an end,” Strong said. “This is the first day of the rest of your lives.”

“There is still hope, and you have started a journey,” said Lincoln County Sheriff Steve Rushing, who was the featured speaker at the ceremony. “You’re gonna have a chance of fulfilling a dream without worrying about your criminal background.”

Once released from drug court, participants have the opportunity to move on with their lives and become productive members of society again.

“Everybody out here that’s graduating has accomplished a lot,” Taylor said. “This is your restoration, this is it.”

Mississippi’s first drug court was founded by U.S. District Judge Keith Starrett in 1999 while he served as state circuit judge for Lincoln, Pike and Walthall counties. So far, the program has had 20 graduating classes.

There are four phases of drug court with decreasing supervision that participants must complete to graduate from the program.

Participants must be clean and sober, and cannot test positive for anything during their time in the program, nor have discipline problems.

It is designed this way to ease people out and help them take ownership of their sobriety.

By failing to meet drug court requirements, participants are subject to sanctions or time in jail or prison.

The purpose of drug courts is to rehabilitate drug using offenders through drug treatment and extreme supervision from the court system.

The 14th Circuit Drug Court currently has 248 participants from Lincoln, Pike and Walthall counties. In order to graduate, participants must spend at least three years in the program.

The state of Mississippi currently has 42 drug courts. There are 22 adult felony programs, with a drug court operating in every Circuit Court district in the state.

Addicts convicted of violent crimes are not eligible for drug court.

Participants who complete the program have their records wiped.