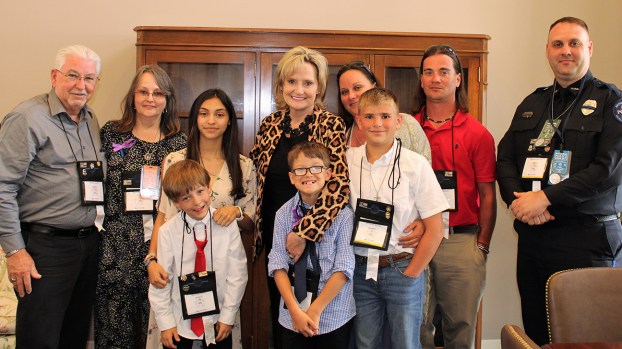 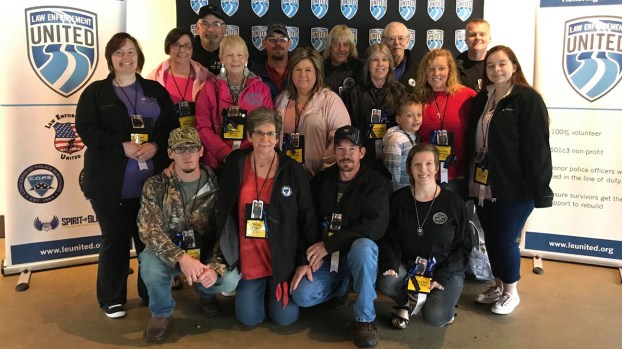 “Today we renew our solemn oath that we will never forget,” President Donald Trump said. “These brave heroes did not put on the uniform for praise or for glory. They wore the badge because it was their duty, their calling, their noble purpose to serve, protect like nobody has ever done it before. They embodied our highest ideals and greatest aspirations. They were the very best of us. There was nobody close. “

The president started his remarks Wednesday with stories about patrolman James White and Cpl. Zach Moak.

“James asked his mom to sign a waiver so he could enlist in the Army National Guard at the age of only 17,” he said. “Nearly 18 years in the military, James became something that he always wanted to be: a police officer.

“His teammate, Zach, spent time caring for his nieces and nephews and family. On days when he worked the night shift, he would tell them, ‘While you are sleeping, I will always be watching over you.’”

White, 35, and Moak, 31, were killed Sept. 29 responding to a call of an early-morning shooting on North Sixth Street.

“Last September, James and Zach responded to a report of shots fired at a home. When they arrived, they bravely engaged the shooters. It was a bad two minutes. It was violent and it was vicious. Within seconds, the killer shot James. At that moment, Zach could have raced to safety; instead, he raced to the side of his friend. As Zach tried to save his teammate, he too was shot and killed, giving his life for his brother in blue.

“Today we remember the words James once told his mom.  He said, ‘Mama, if I ever die in the line of duty, know that I died doing what I truly loved.’”

White’s father, Daryl White of Brookhaven, said he was humbled to hear the president’s remarks.

“I just don’t have words to describe the honor of him choosing my son and Zach Moak to talk about. It was very, very humbling,” he said.

The officer’s mother, Laurie White, of Ashford, Alabama, was asked by the president’s office for permission to mention James.

“I told her the family would be honored, but I had no idea how long he would speak. It was just amazing. I just wanted to walk up there and shake his hand so bad for acknowledging our son,” she said.

She said the weeklong event in the nation’s capital has been emotionally draining but also uplifting.

“I just couldn’t stay. I had to leave,” she said. “It’s just really hard to see your son’s name engraved in a wall. But I’m thankful he’s honored along with the other fallen police officers.

Many in White’s family — including his sons JC and Lee — are in Washington along with Zach’s mother, Vicki Moak, and brother, Chris Moak, and others in the family.

Darrell White said the week has been helpful in his healing process.

“To talk to other fathers, mothers, sisters, wives. To sit down and tell each other’s stories. We know what the others are going through. It’s been therapeutic for me. It has really helped me,” he said.

Wednesday’s ceremonies were surreal for him.

“We’re from Mississippi, a little ol’ country town,” he said. “To have the president of the United States talk about them and then have both families stand up, I was very honored and very proud of my son. Just knowing that President Trump now knows my family. It meant something. It meant a lot.”

The memorial service began in 1982 as a gathering in Senate Park of approximately 120 survivors and supporters of law enforcement. Decades later, the event, more commonly known as National Police Week, has grown to a series of events which attracts thousands of survivors and law enforcement officers to Washington, D.C., each year.

During the week, the names of 371 law enforcement officers who have died in the line of duty — including 158 who died in 2018 — were formally dedicated during candlelight vigil with remarks delivered by U.S. Attorney General William Barr and Memorial Fund Chairman John Ashcroft. The attorney general read the fallen officers’ names.

In addition to the 158 officers who died in 2018, the names of 213 officers, who died in prior years, were added to the National Law Enforcement Officers Memorial this spring. The national monument now contains the names of 21,910 fallen law enforcement officers — from all 50 states, the District of Columbia, U.S. territories, federal, corrections, railroad and military police agencies — who died in the performance of duty throughout U.S. history. The oldest historical death now engraved on the memorial is that of Chesterfield County, Virginia, Sheriff Benjamin Branch whose end of watch was April 29, 1786.

An estimated 30,000 people attended the ceremony in person, including surviving family members, friends, law enforcement colleagues and others.